By Jason Brownlee on January 9, 2017 in Time Series

A popular and widely used statistical method for time series forecasting is the ARIMA model.

ARIMA is an acronym that stands for AutoRegressive Integrated Moving Average. It is a class of model that captures a suite of different standard temporal structures in time series data.

In this tutorial, you will discover how to develop an ARIMA model for time series forecasting in Python.

An ARIMA model is a class of statistical models for analyzing and forecasting time series data.

It explicitly caters to a suite of standard structures in time series data, and as such provides a simple yet powerful method for making skillful time series forecasts.

This acronym is descriptive, capturing the key aspects of the model itself. Briefly, they are:

Each of these components are explicitly specified in the model as a parameter. A standard notation is used of ARIMA(p,d,q) where the parameters are substituted with integer values to quickly indicate the specific ARIMA model being used.

The parameters of the ARIMA model are defined as follows:

A linear regression model is constructed including the specified number and type of terms, and the data is prepared by a degree of differencing in order to make it stationary, i.e. to remove trend and seasonal structures that negatively affect the regression model.

A value of 0 can be used for a parameter, which indicates to not use that element of the model. This way, the ARIMA model can be configured to perform the function of an ARMA model, and even a simple AR, I, or MA model.

Adopting an ARIMA model for a time series assumes that the underlying process that generated the observations is an ARIMA process. This may seem obvious, but helps to motivate the need to confirm the assumptions of the model in the raw observations and in the residual errors of forecasts from the model.

Next, let’s take a look at how we can use the ARIMA model in Python. We will start with loading a simple univariate time series.

This dataset describes the monthly number of sales of shampoo over a 3 year period.

Download the dataset and place it in your current working directory with the filename “shampoo-sales.csv“.

Below is an example of loading the Shampoo Sales dataset with Pandas with a custom function to parse the date-time field. The dataset is baselined in an arbitrary year, in this case 1900.

The data is also plotted as a time series with the month along the x-axis and sales figures on the y-axis. 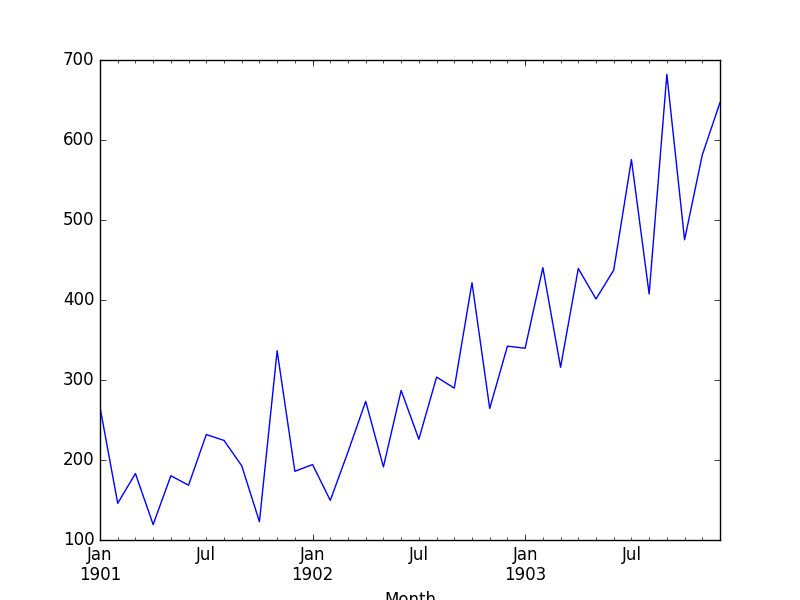 We can see that the Shampoo Sales dataset has a clear trend.

This suggests that the time series is not stationary and will require differencing to make it stationary, at least a difference order of 1.

Running the example, we can see that there is a positive correlation with the first 10-to-12 lags that is perhaps significant for the first 5 lags.

A good starting point for the AR parameter of the model may be 5.

The statsmodels library provides the capability to fit an ARIMA model.

An ARIMA model can be created using the statsmodels library as follows:

Let’s start off with something simple. We will fit an ARIMA model to the entire Shampoo Sales dataset and review the residual errors.

First, we fit an ARIMA(5,1,0) model. This sets the lag value to 5 for autoregression, uses a difference order of 1 to make the time series stationary, and uses a moving average model of 0.

Running the example prints a summary of the fit model. This summarizes the coefficient values used as well as the skill of the fit on the on the in-sample observations.

First, we get a line plot of the residual errors, suggesting that there may still be some trend information not captured by the model. 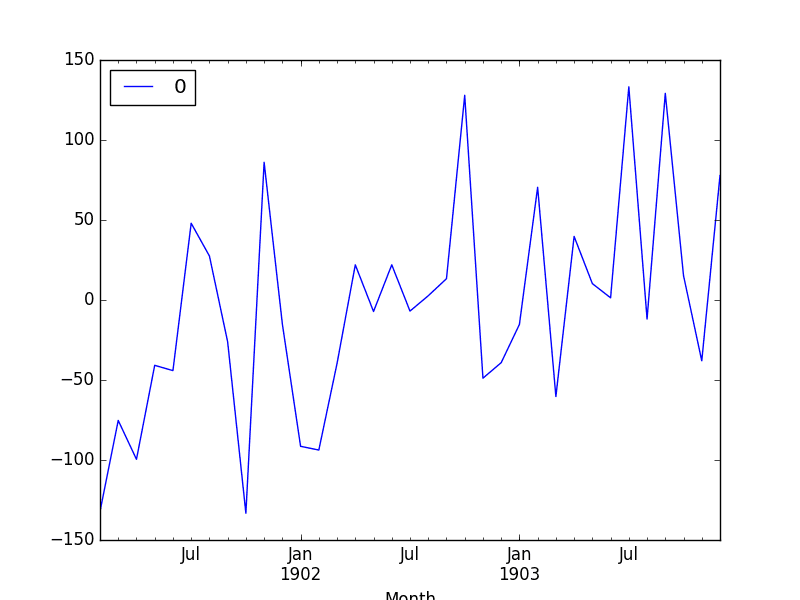 Next, we get a density plot of the residual error values, suggesting the errors are Gaussian, but may not be centered on zero. 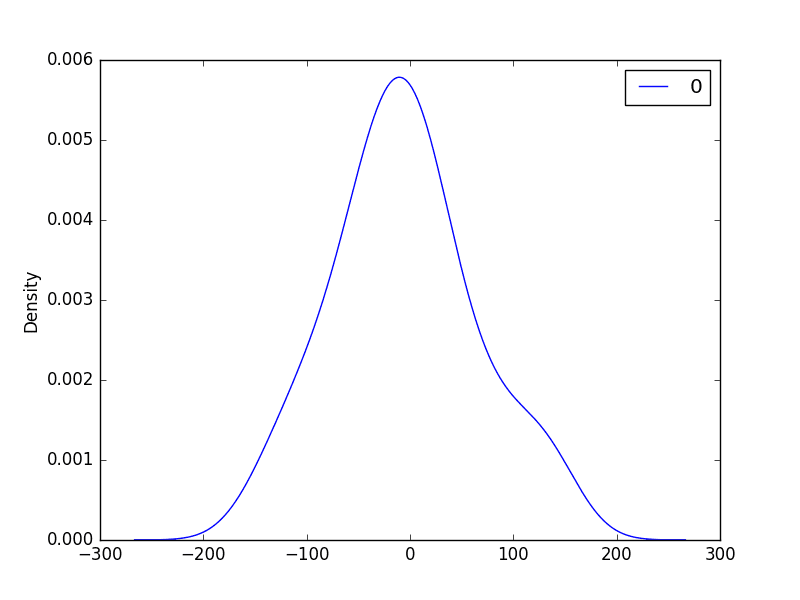 The distribution of the residual errors is displayed. The results show that indeed there is a bias in the prediction (a non-zero mean in the residuals).

Note, that although above we used the entire dataset for time series analysis, ideally we would perform this analysis on just the training dataset when developing a predictive model.

Next, let’s look at how we can use the ARIMA model to make forecasts.

The ARIMA model can be used to forecast future time steps.

If we used 100 observations in the training dataset to fit the model, then the index of the next time step for making a prediction would be specified to the prediction function as start=101, end=101. This would return an array with one element containing the prediction.

We also would prefer the forecasted values to be in the original scale, in case we performed any differencing (d>0 when configuring the model). This can be specified by setting the typ argument to the value ‘levels’: typ=’levels’.

Alternately, we can avoid all of these specifications by using the forecast() function, which performs a one-step forecast using the model.

We can split the training dataset into train and test sets, use the train set to fit the model, and generate a prediction for each element on the test set.

We manually keep track of all observations in a list called history that is seeded with the training data and to which new observations are appended each iteration.

Putting this all together, below is an example of a rolling forecast with the ARIMA model in Python.

Running the example prints the prediction and expected value each iteration.

We can also calculate a final root mean squared error score (RMSE) for the predictions, providing a point of comparison for other ARIMA configurations.

A line plot is created showing the expected values (blue) compared to the rolling forecast predictions (red). We can see the values show some trend and are in the correct scale. 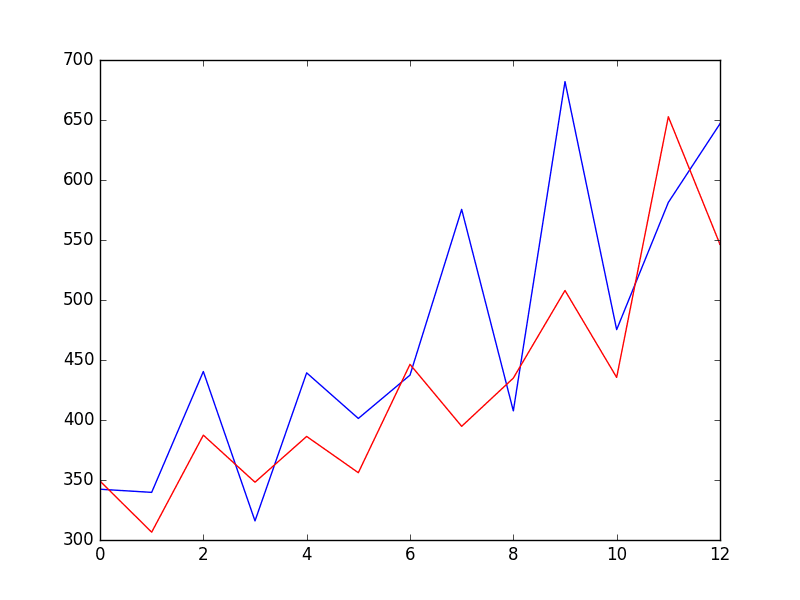 The model could use further tuning of the p, d, and maybe even the q parameters.

The classical approach for fitting an ARIMA model is to follow the Box-Jenkins Methodology.

This is a process that uses time series analysis and diagnostics to discover good parameters for the ARIMA model.

In summary, the steps of this process are as follows:

The process is repeated until either a desirable level of fit is achieved on the in-sample or out-of-sample observations (e.g. training or test datasets).

The process was described in the classic 1970 textbook on the topic titled Time Series Analysis: Forecasting and Control by George Box and Gwilym Jenkins. An updated 5th edition is now available if you are interested in going deeper into this type of model and methodology.

For an example of how to grid search the hyperparameters of the ARIMA model, see the tutorial:

In this tutorial, you discovered how to develop an ARIMA model for time series forecasting in Python.

Do you have any questions about ARIMA, or about this tutorial?
Ask your questions in the comments below and I will do my best to answer.