By Jason Brownlee on January 6, 2017 in Time Series

Careful exploration of residual errors on your time series prediction problem can tell you a lot about your forecast model and even suggest improvements.

In this tutorial, you will discover how to visualize residual errors from time series forecasts.

A residual error is calculated as the expected outcome minus the forecast, for example:

We often stop there and summarize the skill of a model as a summary of this error.

Instead, we can collect these individual residual errors across all forecasts and use them to better understand the forecast model.

Generally, when exploring residual errors we are looking for patterns or structure. A sign of a pattern suggests that the errors are not random.

We expect the residual errors to be random, because it means that the model has captured all of the structure and the only error left is the random fluctuations in the time series that cannot be modeled.

A sign of a pattern or structure suggests that there is more information that a model could capture and use to make better predictions.

Before we start exploring the different ways to look for patterns in residual errors, we need context. In the next section, we will look at a dataset and a simple forecast method that we will use to generate residual errors to explore in this tutorial.

The units are a count and there are 365 observations. The source of the dataset is credited to Newton, 1988.

Below is an example of loading the Daily Female Births dataset from CSV.

Running the example prints the first 5 rows of the loaded file.

The dataset is also shown in a line plot of observations over time. 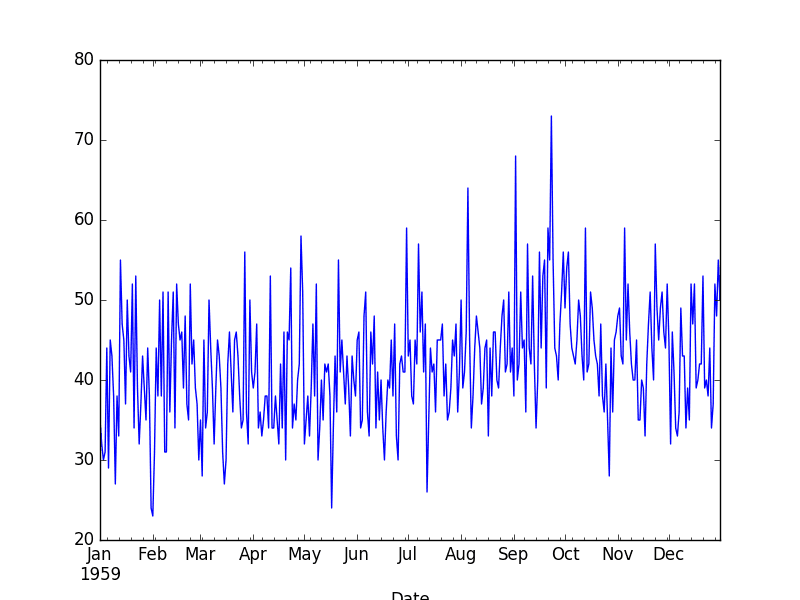 This is called the “naive forecast” or the persistence forecast model.

We can implement the persistence model in Python.

Next, the dataset is split into training and test sets. A total of 66% of the data is kept for training and the remaining 34% is held for the test set. No training is required for the persistence model; this is just a standard test harness approach.

Once split, the train and test sets are separated into their input and output components.

The persistence model is applied by predicting the output value (y) as a copy of the input value (x).

The residual errors are then calculated as the difference between the expected outcome (test_y) and the prediction (predictions).

The example puts this all together and gives us a set of residual forecast errors that we can explore in this tutorial.

Running the example prints the first 5 rows of the forecast residuals.

The first plot is to look at the residual forecast errors over time as a line plot.

We would expect the plot to be random around the value of 0 and not show any trend or cyclic structure.

The array of residual errors can be wrapped in a Pandas DataFrame and plotted directly. The code below provides an example.

Running the example shows a seemingly random plot of the residual time series.

If we did see trend, seasonal or cyclic structure, we could go back to our model and attempt to capture those elements directly. 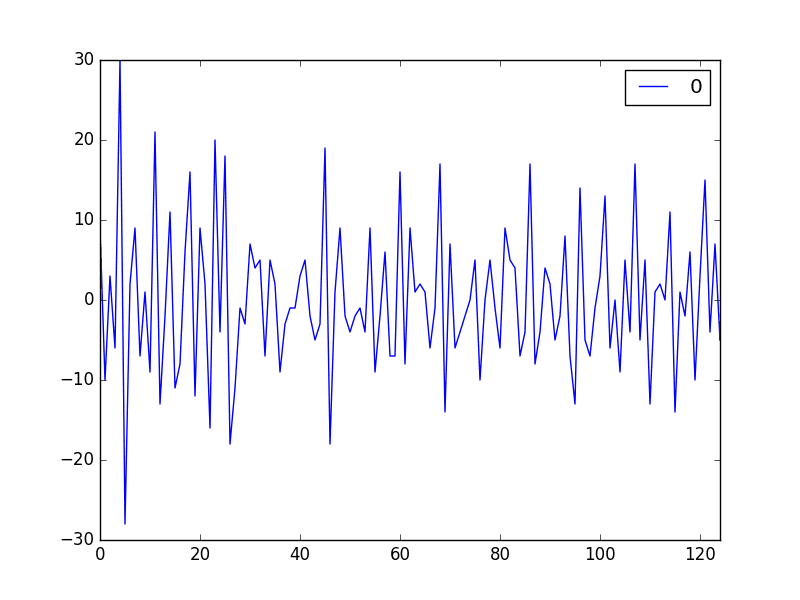 Next, we look at summary statistics that we can use to see how the errors are spread around zero.

We can calculate summary statistics on the residual errors.

It is useful to know about a bias in the forecasts as it can be directly corrected in forecasts prior to their use or evaluation.

Running the example shows a mean error value close to zero, but perhaps not close enough.

It suggests that there may be some bias and that we may be able to further improve the model by performing a bias correction. This could be done by adding the mean residual error (0.064000) to forecasts.

This may work in this case, but it is a naive form of bias correction and there are more sophisticated methods available.

Next, we go beyond summary statistics and look at methods to visualize the distribution of the residual errors.

Plots can be used to better understand the distribution of errors beyond summary statistics.

We would expect the forecast errors to be normally distributed around a zero mean.

Plots can help discover skews in this distribution.

We can use both histograms and density plots to better understand the distribution of residual errors. Below is an example of creating one of each plot.

We can see that the distribution does have a Gaussian look, but is perhaps more pointy, showing an exponential distribution with some asymmetry.

If the plot showed a distribution that was distinctly non-Gaussian, it would suggest that assumptions made by the modeling process were perhaps incorrect and that a different modeling method may be required.

A large skew may suggest the opportunity for performing a transform to the data prior to modeling, such as taking the log or square root. 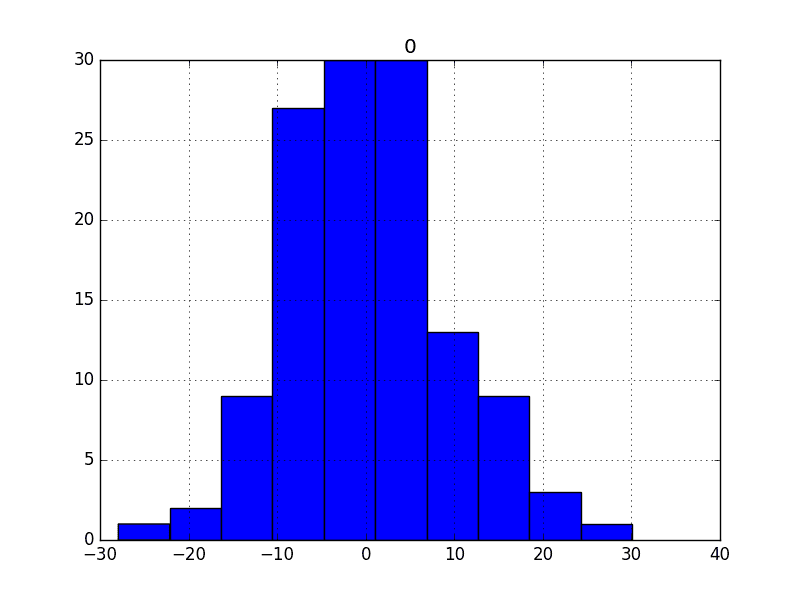 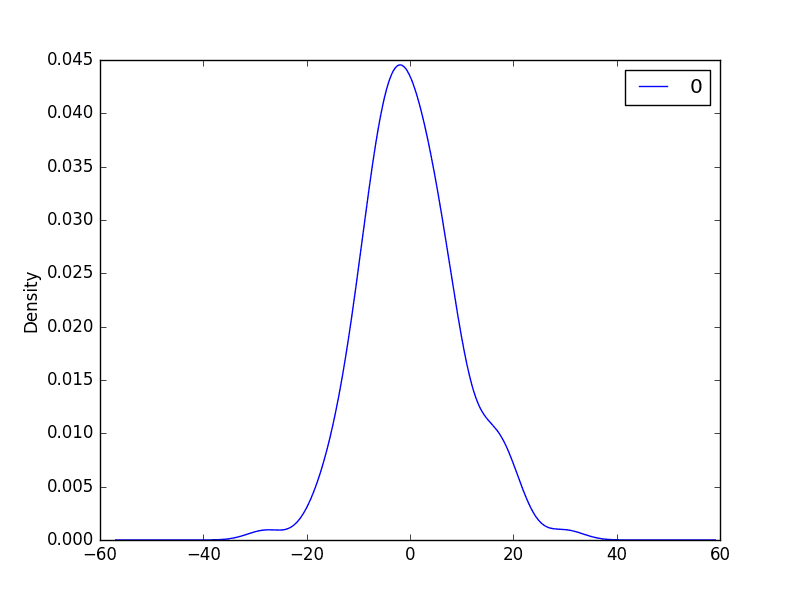 Next, we will look at another quick, and perhaps more reliable, way to check if the distribution of residuals is Gaussian.

A Q-Q plot, or quantile plot, compares two distributions and can be used to see how similar or different they happen to be.

We can create a Q-Q plot using the qqplot() function in the statsmodels library.

The Q-Q plot can be used to quickly check the normality of the distribution of residual errors.

The values are ordered and compared to an idealized Gaussian distribution. The comparison is shown as a scatter plot (theoretical on the x-axis and observed on the y-axis) where a match between the two distributions is shown as a diagonal line from the bottom left to the top-right of the plot.

The plot is helpful to spot obvious departures from this expectation.

Running the example shows a Q-Q plot that the distribution is seemingly normal with a few bumps and outliers. 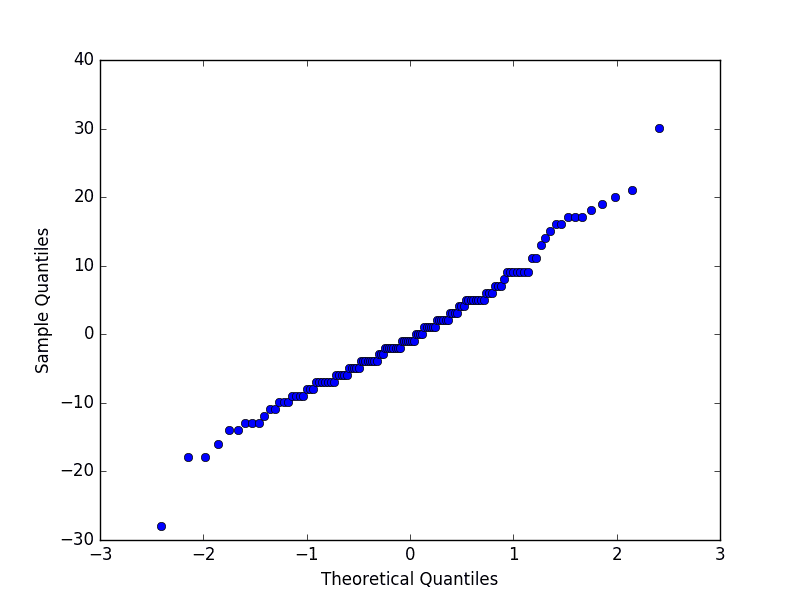 Next, we can check for correlations between the errors over time.

Autocorrelation calculates the strength of the relationship between an observation and observations at prior time steps.

We would not expect there to be any correlation between the residuals. This would be shown by autocorrelation scores being below the threshold of significance (dashed and dotted horizontal lines on the plot).

A significant autocorrelation in the residual plot suggests that the model could be doing a better job of incorporating the relationship between observations and lagged observations, called autoregression.

Running the example creates an autoregression plot of other residual errors.

We do not see an obvious autocorrelation trend across the plot. There may be some positive autocorrelation worthy of further investigation at lag 7 that seems significant. 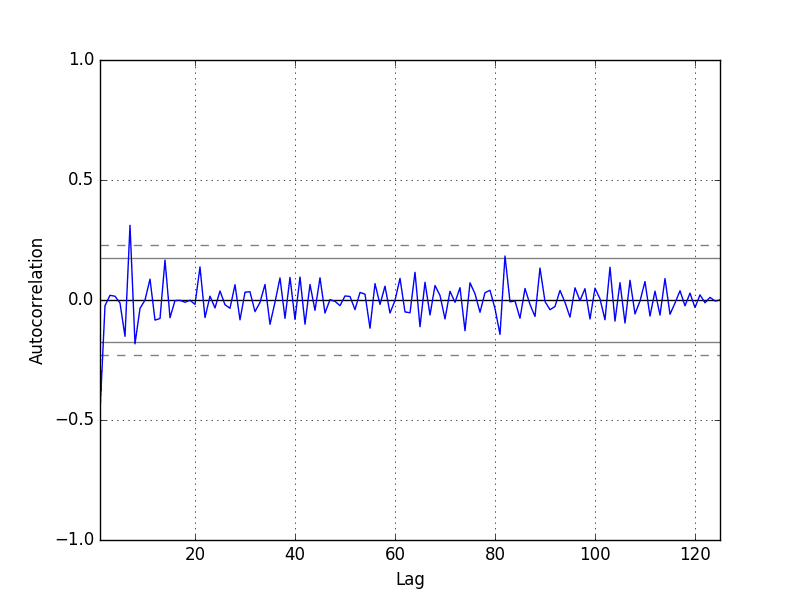 In this tutorial, you discovered how to explore the time series of residual forecast errors with Python.

Do you have any questions about exploring residual error time series, or about this tutorial?
Ask your questions in the comments below.