By Jason Brownlee on November 11, 2020 in Python Machine Learning

Overfitting is a common explanation for the poor performance of a predictive model.

An analysis of learning dynamics can help to identify whether a model has overfit the training dataset and may suggest an alternate configuration to use that could result in better predictive performance.

In this tutorial, you will discover how to identify overfitting for machine learning models in Python. 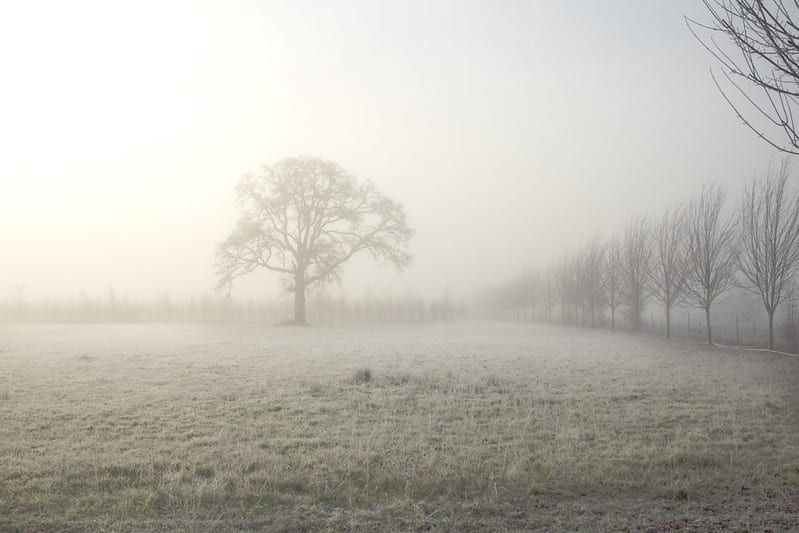 Overfitting refers to an unwanted behavior of a machine learning algorithm used for predictive modeling.

It is the case where model performance on the training dataset is improved at the cost of worse performance on data not seen during training, such as a holdout test dataset or new data.

We care about overfitting because it is a common cause for “poor generalization” of the model as measured by high “generalization error.” That is error made by the model when making predictions on new data.

This means, if our model has poor performance, maybe it is because it has overfit.

But what does it mean if a model’s performance is “significantly better” on the training set compared to the test set?

For example, it is common and perhaps normal for the model to have better performance on the training set than the test set.

As such, we can perform an analysis of the algorithm on the dataset to better expose the overfitting behavior.

How to Perform an Overfitting Analysis

It is a tool that can help you learn more about the learning dynamics of a machine learning model.

This might be achieved by reviewing the model behavior during a single run for algorithms like neural networks that are fit on the training dataset incrementally.

If you would like to learn more about learning curves for algorithms that learn incrementally, see the tutorial:

If this pattern is observed, then training should stop at that point where performance gets worse on the test or validation set for algorithms that learn incrementally

This makes sense for algorithms that learn incrementally like neural networks, but what about other algorithms?

One approach for performing an overfitting analysis on algorithms that do not learn incrementally is by varying a key model hyperparameter and evaluating the model performance on the train and test sets for each configuration.

To make this clear, let’s explore a case of analyzing a model for overfitting in the next section.

Example of Overfitting in Scikit-Learn

In this section, we will look at an example of overfitting a machine learning model to a training dataset.

We will use the make_classification() function to define a binary (two class) classification prediction problem with 10,000 examples (rows) and 20 input features (columns).

The example below creates the dataset and summarizes the shape of the input and output components.

Running the example creates the dataset and reports the shape, confirming our expectations.

Next, we need to split the dataset into train and test subsets.

We will use the train_test_split() function and split the data into 70 percent for training a model and 30 percent for evaluating it.

Running the example splits the dataset and we can confirm that we have 7,000 examples for training and 3,000 for evaluating a model.

Next, we can explore a machine learning model overfitting the training dataset.

We will use a decision tree via the DecisionTreeClassifier and test different tree depths with the “max_depth” argument.

Shallow decision trees (e.g. few levels) generally do not overfit but have poor performance (high bias, low variance). Whereas deep trees (e.g. many levels) generally do overfit and have good performance (low bias, high variance). A desirable tree is one that is not so shallow that it has low skill and not so deep that it overfits the training dataset.

We evaluate decision tree depths from 1 to 20.

We will enumerate each tree depth, fit a tree with a given depth on the training dataset, then evaluate the tree on both the train and test sets.

The expectation is that as the depth of the tree increases, performance on train and test will improve to a point, and as the tree gets too deep, it will begin to overfit the training dataset at the expense of worse performance on the holdout test set.

At the end of the run, we will then plot all model accuracy scores on the train and test sets for visual comparison.

Tying this together, the complete example of exploring different tree depths on the synthetic binary classification dataset is listed below.

Running the example fits and evaluates a decision tree on the train and test sets for each tree depth and reports the accuracy scores.

We can also see that the accuracy on the test set improves with tree depth until a depth of about eight or nine levels, after which accuracy begins to get worse with each increase in tree depth.

This is exactly what we would expect to see in a pattern of overfitting.

We would choose a tree depth of eight or nine before the model begins to overfit the training dataset.

A figure is also created that shows line plots of the model accuracy on the train and test sets with different tree depths.

The plot clearly shows that increasing the tree depth in the early stages results in a corresponding improvement in both train and test sets.

This continues until a depth of around 10 levels, after which the model is shown to overfit the training dataset at the cost of worse performance on the holdout dataset. 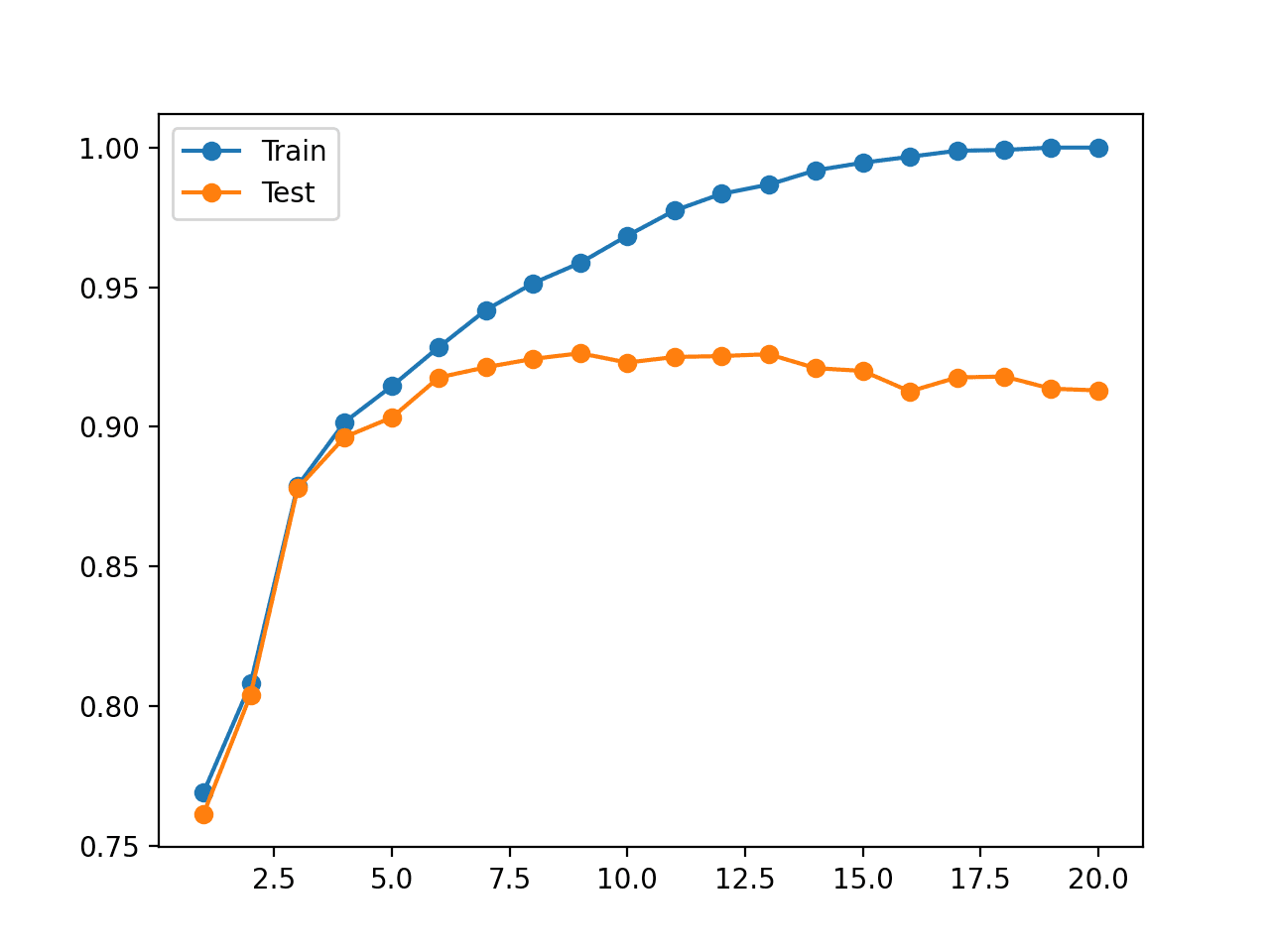 This analysis is interesting. It shows why the model has a worse hold-out test set performance when “max_depth” is set to large values.

But it is not required.

We can just as easily choose a “max_depth” using a grid search without performing an analysis on why some values result in better performance and some result in worse performance.

In fact, in the next section, we will show where this analysis can be misleading.

Counterexample of Overfitting in Scikit-Learn

Sometimes, we may perform an analysis of machine learning model behavior and be deceived by the results.

A good example of this is varying the number of neighbors for the k-nearest neighbors algorithms, which we can implement using the KNeighborsClassifier class and configure via the “n_neighbors” argument.

Let’s forget how KNN works for the moment.

We can perform the same analysis of the KNN algorithm as we did in the previous section for the decision tree and see if our model overfits for different configuration values. In this case, we will vary the number of neighbors from 1 to 50 to get more of the effect.

Running the example fits and evaluates a KNN model on the train and test sets for each number of neighbors and reports the accuracy scores.

We do not see this pattern.

Instead, we see that accuracy on the training dataset starts at perfect accuracy and falls with almost every increase in the number of neighbors.

We also see that performance of the model on the holdout test improves to a value of about five neighbors, holds level and begins a downward trend after that.

A figure is also created that shows line plots of the model accuracy on the train and test sets with different numbers of neighbors.

The plots make the situation clearer. It looks as though the line plot for the training set is dropping to converge with the line for the test set. Indeed, this is exactly what is happening. 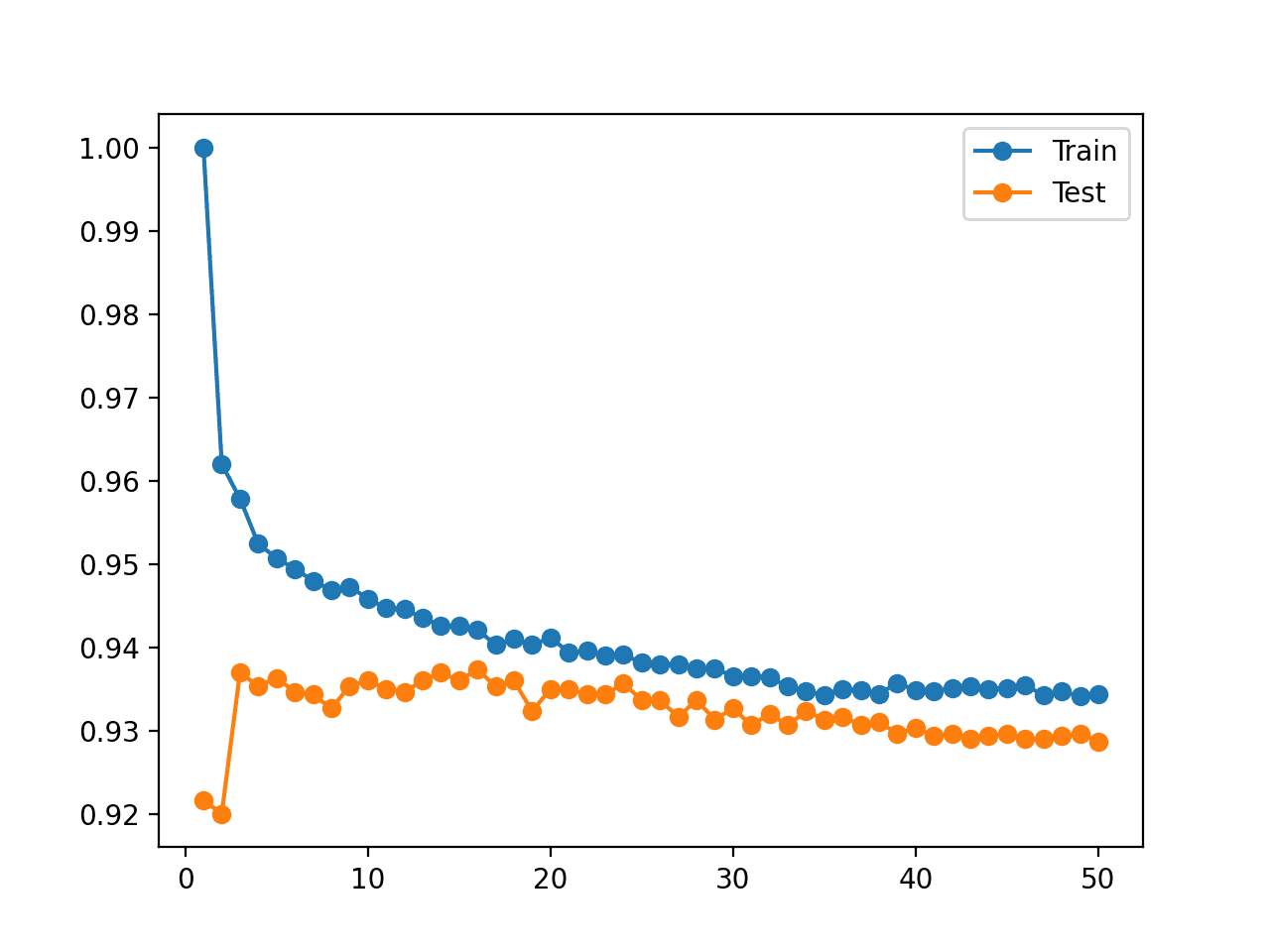 In fact, this argument holds for any machine learning algorithm and slices to the core of the confusion around overfitting for beginners.

Overfitting can be an explanation for poor performance of a predictive model.

Creating learning curve plots that show the learning dynamics of a model on the train and test dataset is a helpful analysis for learning more about a model on a dataset.

But overfitting should not be confused with model selection.

We choose a predictive model or model configuration based on its out-of-sample performance. That is, its performance on new data not seen during training.

The reason we do this is that in predictive modeling, we are primarily interested in a model that makes skillful predictions. We want the model that can make the best possible predictions given the time and computational resources we have available.

It might also mean that the model has poor or terrible performance on the training dataset.

Maybe. But, maybe not.

This argument is based on the idea that a model that performs well on both train and test sets has a better understanding of the underlying problem.

I believe this is the sticking point for beginners that often ask how to fix overfitting for their scikit-learn machine learning model.

The worry is that a model must perform well on both train and test sets, otherwise, they are in trouble.

This is not the case.

Performance on the training set is not relevant during model selection. You must focus on the out-of-sample performance only when choosing a predictive model.

In this tutorial, you discovered how to identify overfitting for machine learning models in Python.

Jason Brownlee, PhD is a machine learning specialist who teaches developers how to get results with modern machine learning methods via hands-on tutorials.
View all posts by Jason Brownlee →
Develop an Intuition for How Ensemble Learning Works
Multivariate Adaptive Regression Splines (MARS) in Python