By Jason Brownlee on January 2, 2017 in Time Series

Autoregression is a time series model that uses observations from previous time steps as input to a regression equation to predict the value at the next time step.

It is a very simple idea that can result in accurate forecasts on a range of time series problems.

In this tutorial, you will discover how to implement an autoregressive model for time series forecasting with Python. 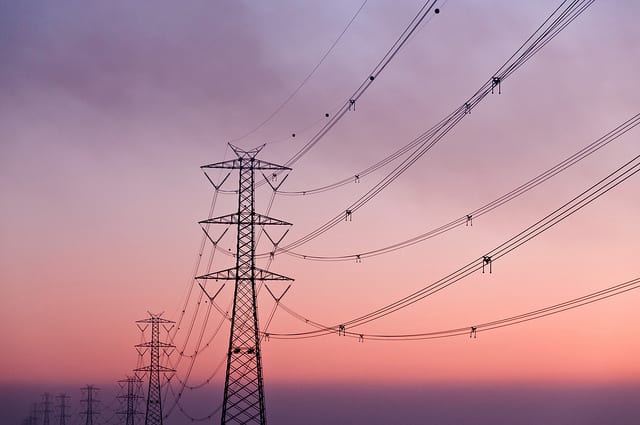 A regression model, such as linear regression, models an output value based on a linear combination of input values.

Where yhat is the prediction, b0 and b1 are coefficients found by optimizing the model on training data, and X is an input value.

This technique can be used on time series where input variables are taken as observations at previous time steps, called lag variables.

For example, we can predict the value for the next time step (t+1) given the observations at the last two time steps (t-1 and t-2). As a regression model, this would look as follows:

Because the regression model uses data from the same input variable at previous time steps, it is referred to as an autoregression (regression of self).

An autoregression model makes an assumption that the observations at previous time steps are useful to predict the value at the next time step.

This relationship between variables is called correlation.

Again, because the correlation is calculated between the variable and itself at previous time steps, it is called an autocorrelation. It is also called serial correlation because of the sequenced structure of time series data.

The correlation statistics can also help to choose which lag variables will be useful in a model and which will not.

Interestingly, if all lag variables show low or no correlation with the output variable, then it suggests that the time series problem may not be predictable. This can be very useful when getting started on a new dataset.

In this tutorial, we will investigate the autocorrelation of a univariate time series then develop an autoregression model and use it to make predictions.

Before we do that, let’s first review the Minimum Daily Temperatures data that will be used in the examples.

Download the dataset into your current working directory with the filename “daily-min-temperatures.csv“.

The code below will load the dataset as a Pandas Series.

Running the example prints the first 5 rows from the loaded dataset.

A line plot of the dataset is then created. 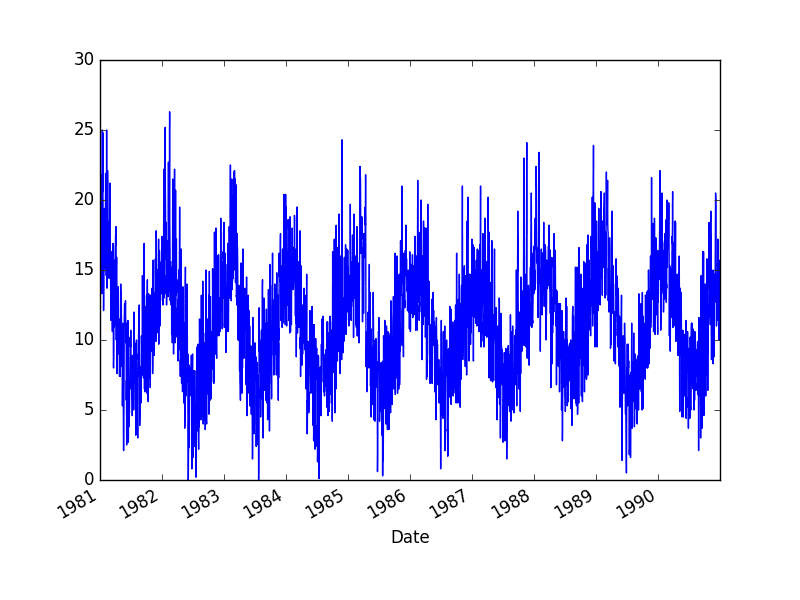 There is a quick, visual check that we can do to see if there is an autocorrelation in our time series dataset.

This could be done manually by first creating a lag version of the time series dataset and using a built-in scatter plot function in the Pandas library.

But there is an easier way.

Pandas provides a built-in plot to do exactly this, called the lag_plot() function.

Below is an example of creating a lag plot of the Minimum Daily Temperatures dataset. 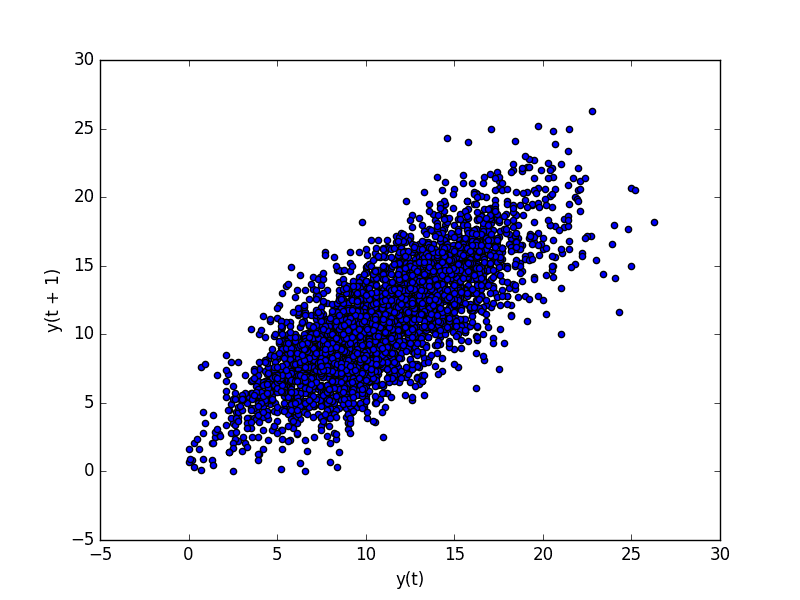 We can see a large ball of observations along a diagonal line of the plot. It clearly shows a relationship or some correlation.

This process could be repeated for any other lagged observation, such as if we wanted to review the relationship with the last 7 days or with the same day last month or last year.

Another quick check that we can do is to directly calculate the correlation between the observation and the lag variable.

Correlation can be calculated easily using the corr() function on the DataFrame of the lagged dataset.

The example below creates a lagged version of the Minimum Daily Temperatures dataset and calculates a correlation matrix of each column with other columns, including itself.

This is a good confirmation for the plot above.

It shows a strong positive correlation (0.77) between the observation and the lag=1 value.

This is good for one-off checks, but tedious if we want to check a large number of lag variables in our time series.

Next, we will look at a scaled-up version of this approach.

We can plot the correlation coefficient for each lag variable.

This can very quickly give an idea of which lag variables may be good candidates for use in a predictive model and how the relationship between the observation and its historic values changes over time.

We could manually calculate the correlation values for each lag variable and plot the result. Thankfully, Pandas provides a built-in plot called the autocorrelation_plot() function.

The plot provides the lag number along the x-axis and the correlation coefficient value between -1 and 1 on the y-axis. The plot also includes solid and dashed lines that indicate the 95% and 99% confidence interval for the correlation values. Correlation values above these lines are more significant than those below the line, providing a threshold or cutoff for selecting more relevant lag values.

Running the example shows the swing in positive and negative correlation as the temperature values change across summer and winter seasons each previous year. 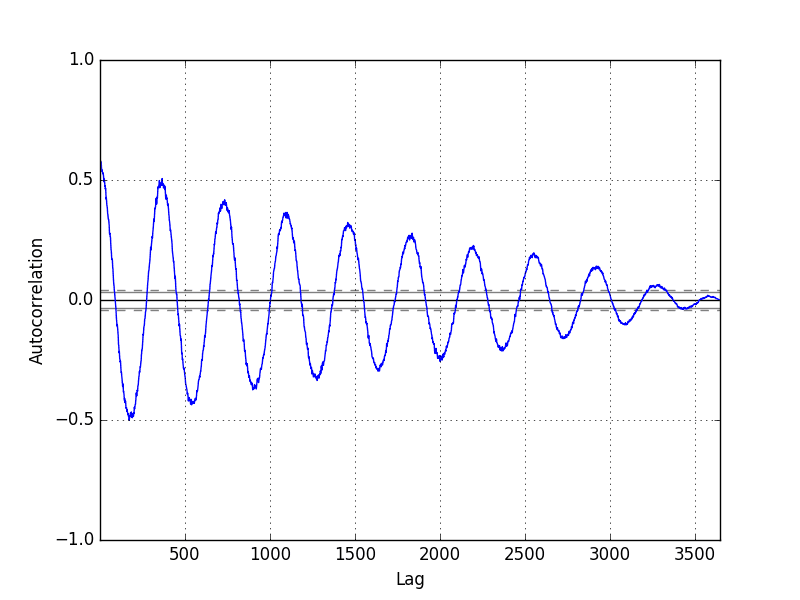 The statsmodels library also provides a version of the plot in the plot_acf() function as a line plot.

In this example, we limit the lag variables evaluated to 31 for readability. 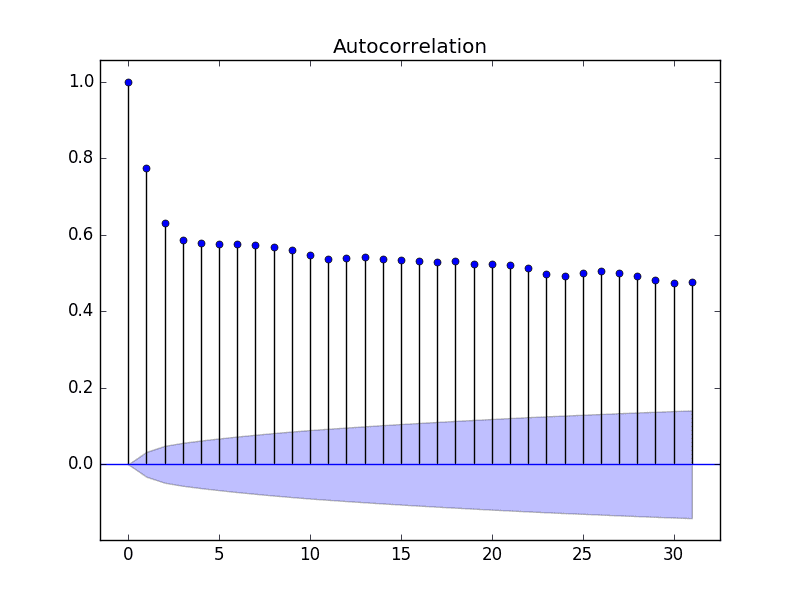 Now that we know how to review the autocorrelation in our time series, let’s look at modeling it with an autoregression.

Before we do that, let’s establish a baseline performance.

Let’s say that we want to develop a model to predict the last 7 days of minimum temperatures in the dataset given all prior observations.

The simplest model that we could use to make predictions would be to persist the last observation. We can call this a persistence model and it provides a baseline of performance for the problem that we can use for comparison with an autoregression model.

We can develop a test harness for the problem by splitting the observations into training and test sets, with only the last 7 observations in the dataset assigned to the test set as “unseen” data that we wish to predict.

The predictions are made using a walk-forward validation model so that we can persist the most recent observations for the next day. This means that we are not making a 7-day forecast, but 7 1-day forecasts.

The value provides a baseline performance for the problem.

The expected values for the next 7 days are plotted (blue) compared to the predictions from the model (red). 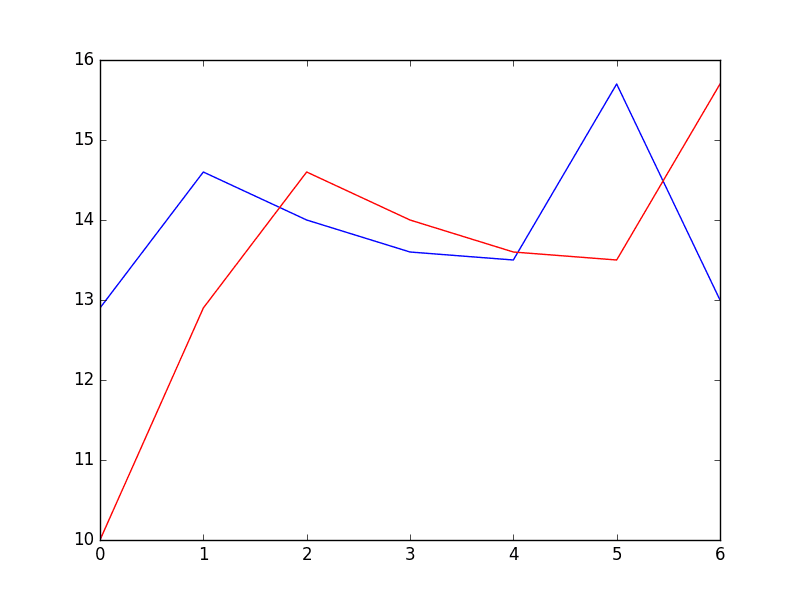 We could calculate the linear regression model manually using the LinearRegession class in scikit-learn and manually specify the lag input variables to use.

Alternately, the statsmodels library provides an autoregression model where you must specify an appropriate lag value and trains a linear regression model. It is provided in the AutoReg class.

We can use this model by first creating the model AutoReg() and then calling fit() to train it on our dataset. This returns an AutoRegResults object.

Once fit, we can use the model to make a prediction by calling the predict() function for a number of observations in the future. This creates 1 7-day forecast, which is different from the persistence example above.

Running the example the list of coefficients in the trained linear regression model.

The 7 day forecast is then printed and the mean squared error of the forecast is summarized.

A plot of the expected (blue) vs the predicted values (red) is made.

The forecast does look pretty good (about 1 degree Celsius out each day), with big deviation on day 5. 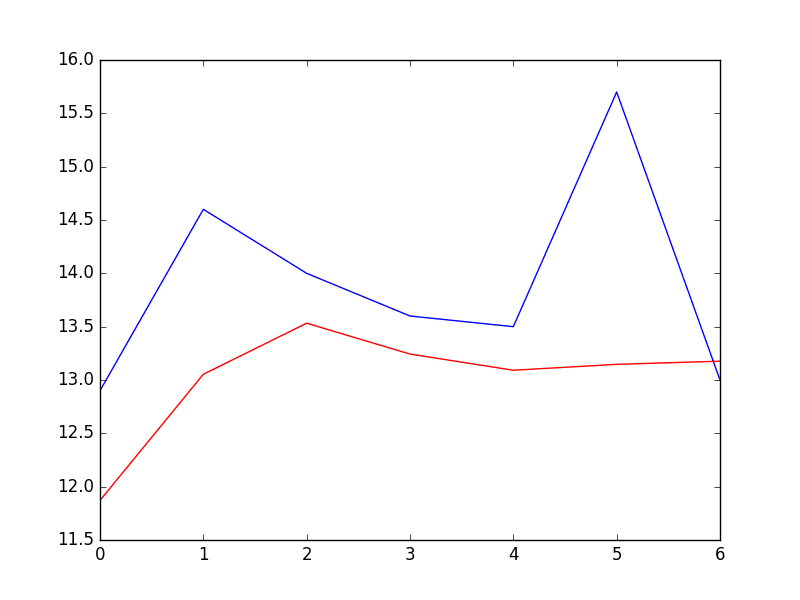 The statsmodels API does not make it easy to update the model as new observations become available.

One way would be to re-train the AutoReg model each day as new observations become available, and that may be a valid approach, if not computationally expensive.

An alternative would be to use the learned coefficients and manually make predictions. This requires that the history of 29 prior observations be kept and that the coefficients be retrieved from the model and used in the regression equation to come up with new forecasts.

The coefficients are provided in an array with the intercept term followed by the coefficients for each lag variable starting at t-1 to t-n. We simply need to use them in the right order on the history of observations, as follows:

Again, running the example prints the forecast and the mean squared error.

We can see a small improvement in the forecast when comparing the error scores. 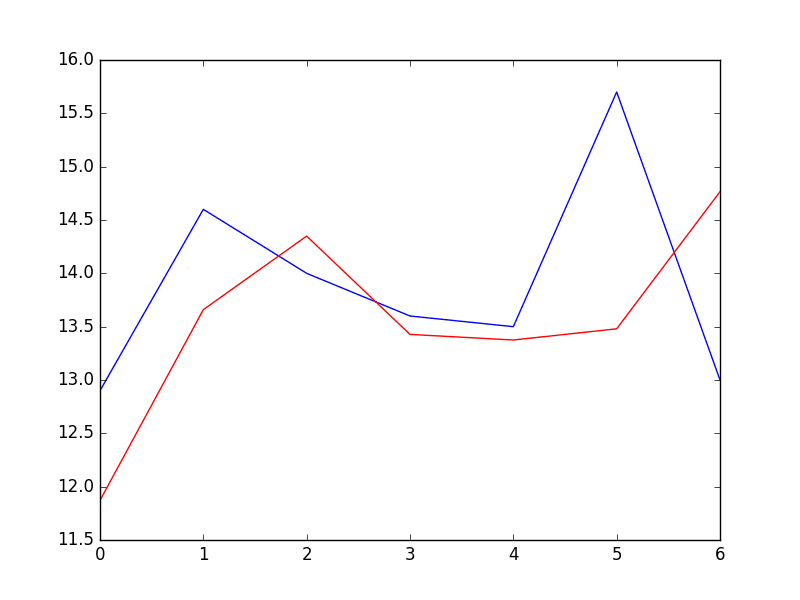 This section provides some resources if you are looking to dig deeper into autocorrelation and autoregression.

In this tutorial, you discovered how to make autoregression forecasts for time series data using Python.

Do you have any questions about autoregression, or about this tutorial?
Ask your questions in the comments below and I will do my best to answer.

211 Responses to Autoregression Models for Time Series Forecasting With Python