By Jason Brownlee on November 4, 2019 in Probability

Monte Carlo methods are a class of techniques for randomly sampling a probability distribution.

There are many problem domains where describing or estimating the probability distribution is relatively straightforward, but calculating a desired quantity is intractable. This may be due to many reasons, such as the stochastic nature of the domain or an exponential number of random variables.

Instead, a desired quantity can be approximated by using random sampling, referred to as Monte Carlo methods. These methods were initially used around the time that the first computers were created and remain pervasive through all fields of science and engineering, including artificial intelligence and machine learning.

In this post, you will discover Monte Carlo methods for sampling probability distributions. 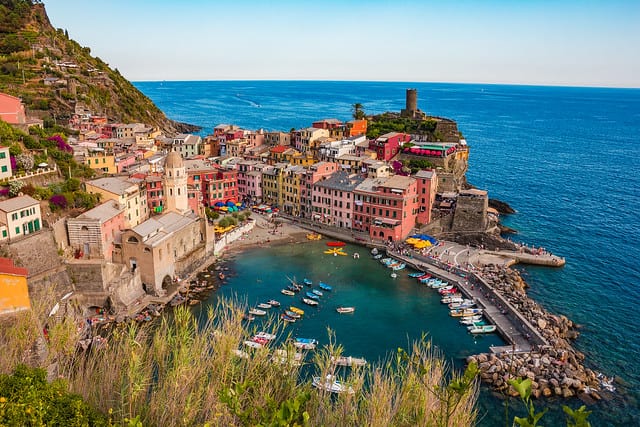 A Gentle Introduction to the Monte Carlo Sampling for Probability
Photo by Med Cruise Guide, some rights reserved.

There are many problems in probability, and more broadly in machine learning, where we cannot calculate an analytical solution directly.

In fact, there may be an argument that exact inference may be intractable for most practical probabilistic models.

For most probabilistic models of practical interest, exact inference is intractable, and so we have to resort to some form of approximation.

In problems of this kind, it is often possible to define or estimate the probability distributions for the random variables involved, either directly or indirectly via a computational simulation.

Instead of calculating the quantity directly, sampling can be used.

Sampling provides a flexible way to approximate many sums and integrals at reduced cost.

Samples can be drawn randomly from the probability distribution and used to approximate the desired quantity.

This general class of techniques for random sampling from a probability distribution is referred to as Monte Carlo methods.

What Are Monte Carlo Methods?

Monte Carlo methods, or MC for short, are a class of techniques for randomly sampling a probability distribution.

There are three main reasons to use Monte Carlo methods to randomly sample a probability distribution; they are:

Monte Carlo methods are named for the casino in Monaco and were first developed to solve problems in particle physics at around the time of the development of the first computers and the Manhattan project for developing the first atomic bomb.

This is called a Monte Carlo approximation, named after a city in Europe known for its plush gambling casinos. Monte Carlo techniques were first developed in the area of statistical physics – in particular, during development of the atomic bomb – but are now widely used in statistics and machine learning as well.

Drawing a sample may be as simple as calculating the probability for a randomly selected event, or may be as complex as running a computational simulation, with the latter often referred to as a Monte Carlo simulation.

Multiple samples are collected and used to approximate the desired quantity.

Given the law of large numbers from statistics, the more random trials that are performed, the more accurate the approximated quantity will become.

… the law of large numbers states that if the samples x(i) are i.i.d., then the average converges almost surely to the expected value

As such, the number of samples provides control over the precision of the quantity that is being approximated, often limited by the computational complexity of drawing a sample.

By generating enough samples, we can achieve any desired level of accuracy we like. The main issue is: how do we efficiently generate samples from a probability distribution, particularly in high dimensions?

Additionally, given the central limit theorem, the distribution of the samples will form a Normal distribution, the mean of which can be taken as the approximated quantity and the variance used to provide a confidence interval for the quantity.

Monte Carlo methods are defined in terms of the way that samples are drawn or the constraints imposed on the sampling process.

It’s a huge topic with many books dedicated to it. Next, let’s make the idea of Monte Carlo sampling concrete with some familiar examples.

We use Monte Carlo methods all the time without thinking about it.

We are also using the Monte Carlo method when we gather a random sample of data from the domain and estimate the probability distribution of the data using a histogram or density estimation method.

There are many examples of the use of Monte Carlo methods across a range of scientific disciplines.

For example, Monte Carlo methods can be used for:

The methods are used to address difficult inference in problems in applied probability, such as sampling from probabilistic graphical models.

Related is the idea of sequential Monte Carlo methods used in Bayesian models that are often referred to as particle filters.

Particle filtering (PF) is a Monte Carlo, or simulation based, algorithm for recursive Bayesian inference.

Many important technologies used to accomplish machine learning goals are based on drawing samples from some probability distribution and using these samples to form a Monte Carlo estimate of some desired quantity.

They provide the basis for estimating the likelihood of outcomes in artificial intelligence problems via simulation, such as robotics. More simply, Monte Carlo methods are used to solve intractable integration problems, such as firing random rays in path tracing for computer graphics when rendering a computer-generated scene.

In machine learning, Monte Carlo methods provide the basis for resampling techniques like the bootstrap method for estimating a quantity, such as the accuracy of a model on a limited dataset.

The bootstrap is a simple Monte Carlo technique to approximate the sampling distribution. This is particularly useful in cases where the estimator is a complex function of the true parameters.

Random sampling of model hyperparameters when tuning a model is a Monte Carlo method, as are ensemble models used to overcome challenges such as the limited size and noise in a small data sample and the stochastic variance in a learning algorithm.

Monte Carlo algorithms, of which simulated annealing is an example, are used in many branches of science to estimate quantities that are difficult to calculate exactly.

We can make Monte Carlo sampling concrete with a worked example.

In this case, we will have a function that defines the probability distribution of a random variable. We will use a Gaussian distribution with a mean of 50 and a standard deviation of 5 and draw random samples from this distribution.

Let’s pretend we don’t know the form of the probability distribution for this random variable and we want to sample the function to get an idea of the probability density. We can draw a sample of a given size and plot a histogram to estimate the density.

The normal() NumPy function can be used to randomly draw samples from a Gaussian distribution with the specified mean (mu), standard deviation (sigma), and sample size.

To make the example more interesting, we will repeat this experiment four times with different sized samples. We would expect that as the size of the sample is increased, the probability density will better approximate the true density of the target function, given the law of large numbers.

Running the example creates four differently sized samples and plots a histogram for each.

We can see that the small sample sizes of 10 and 50 do not effectively capture the density of the target function. We can see that 100 samples is better, but it is not until 1,000 samples that we clearly see the familiar bell-shape of the Gaussian probability distribution.

This highlights the need to draw many samples, even for a simple random variable, and the benefit of increased accuracy of the approximation with the number of samples drawn. 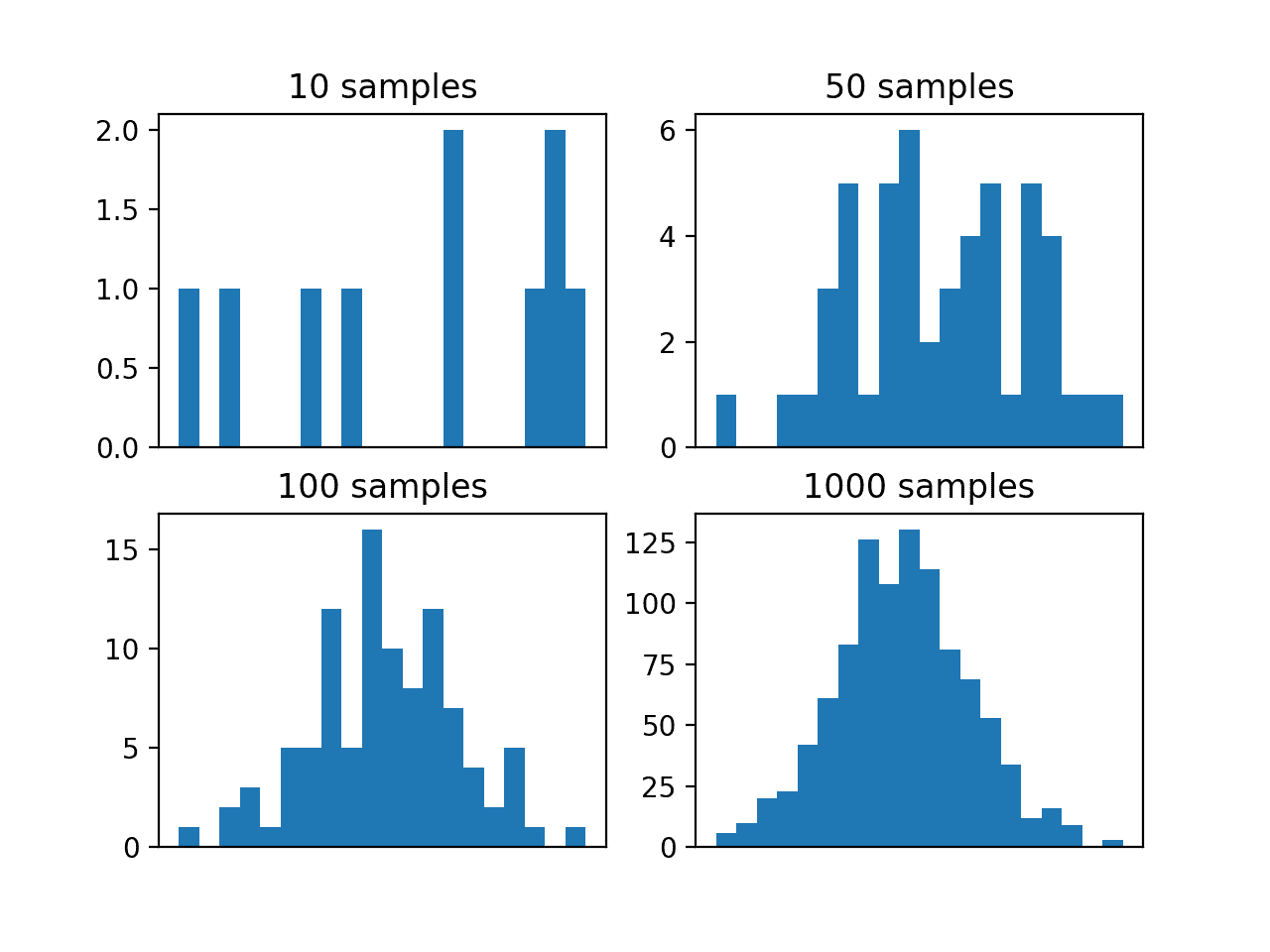 In this post, you discovered Monte Carlo methods for sampling probability distributions.