By Jason Brownlee on September 5, 2018 in Probability

How to Score Probability Predictions in Python and
Develop an Intuition for Different Metrics.

Predicting probabilities instead of class labels for a classification problem can provide additional nuance and uncertainty for the predictions.

In this tutorial, you will discover three scoring methods that you can use to evaluate the predicted probabilities on your classification predictive modeling problem. 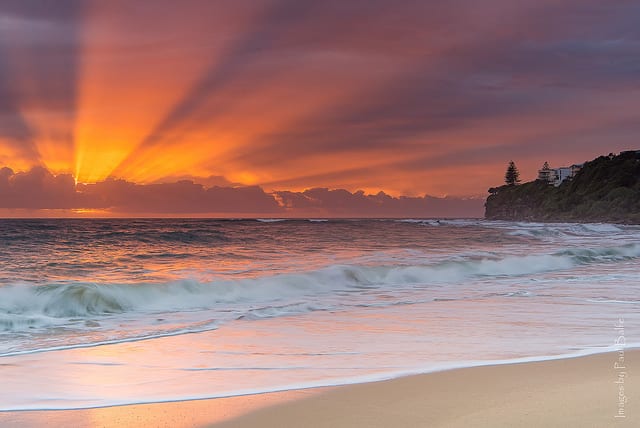 A Gentle Introduction to Probability Scoring Methods in Python
Photo by Paul Balfe, some rights reserved.

Each predicted probability is compared to the actual class output value (0 or 1) and a score is calculated that penalizes the probability based on the distance from the expected value. The penalty is logarithmic, offering a small score for small differences (0.1 or 0.2) and enormous score for a large difference (0.9 or 1.0).

A model with perfect skill has a log loss score of 0.0.

In order to summarize the skill of a model using log loss, the log loss is calculated for each predicted probability, and the average loss is reported.

The log loss can be implemented in Python using the log_loss() function in scikit-learn.

In the binary classification case, the function takes a list of true outcome values and a list of probabilities as arguments and calculates the average log loss for the predictions.

We can make a single log loss score concrete with an example.

Given a specific known outcome of 0, we can predict values of 0.0 to 1.0 in 0.01 increments (101 predictions) and calculate the log loss for each. The result is a curve showing how much each prediction is penalized as the probability gets further away from the expected value. We can repeat this for a known outcome of 1 and see the same curve in reverse.

Running the example creates a line plot showing the loss scores for probability predictions from 0.0 to 1.0 for both the case where the true label is 0 and 1.

This helps to build an intuition for the effect that the loss score has when evaluating predictions. 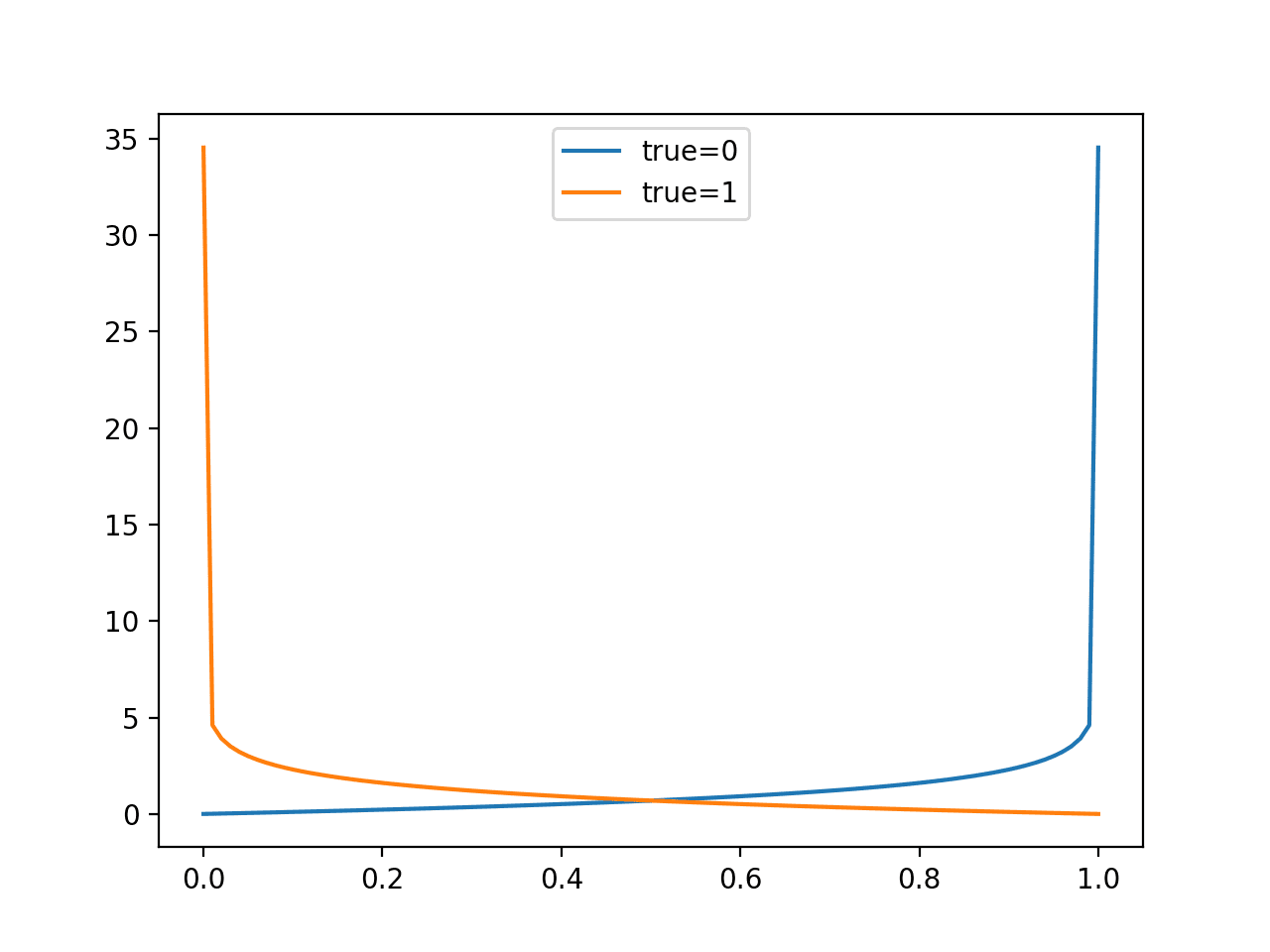 Model skill is reported as the average log loss across the predictions in a test dataset.

As an average, we can expect that the score will be suitable with a balanced dataset and misleading when there is a large imbalance between the two classes in the test set. This is because predicting 0 or small probabilities will result in a small loss.

We can demonstrate this by comparing the distribution of loss values when predicting different constant probabilities for a balanced and an imbalanced dataset.

First, the example below predicts values from 0.0 to 1.0 in 0.1 increments for a balanced dataset of 50 examples of class 0 and 1.

Running the example, we can see that a model is better-off predicting probabilities values that are not sharp (close to the edge) and are back towards the middle of the distribution.

The penalty of being wrong with a sharp probability is very large. 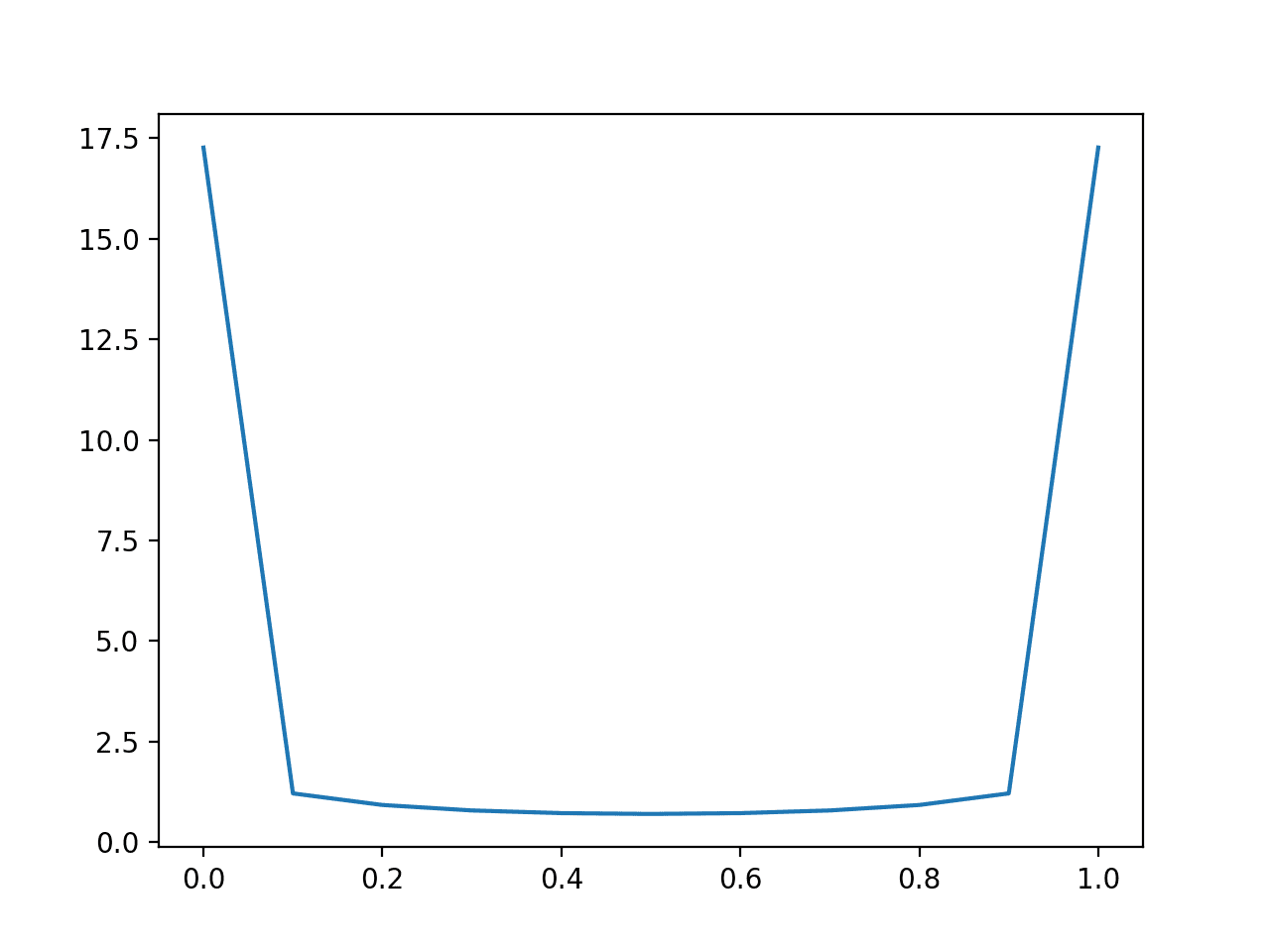 We can repeat this experiment with an imbalanced dataset with a 10:1 ratio of class 0 to class 1.

Here, we can see that a model that is skewed towards predicting very small probabilities will perform well, optimistically so.

The naive model that predicts a constant probability of 0.1 will be the baseline model to beat.

The result suggests that model skill evaluated with log loss should be interpreted carefully in the case of an imbalanced dataset, perhaps adjusted relative to the base rate for class 1 in the dataset. 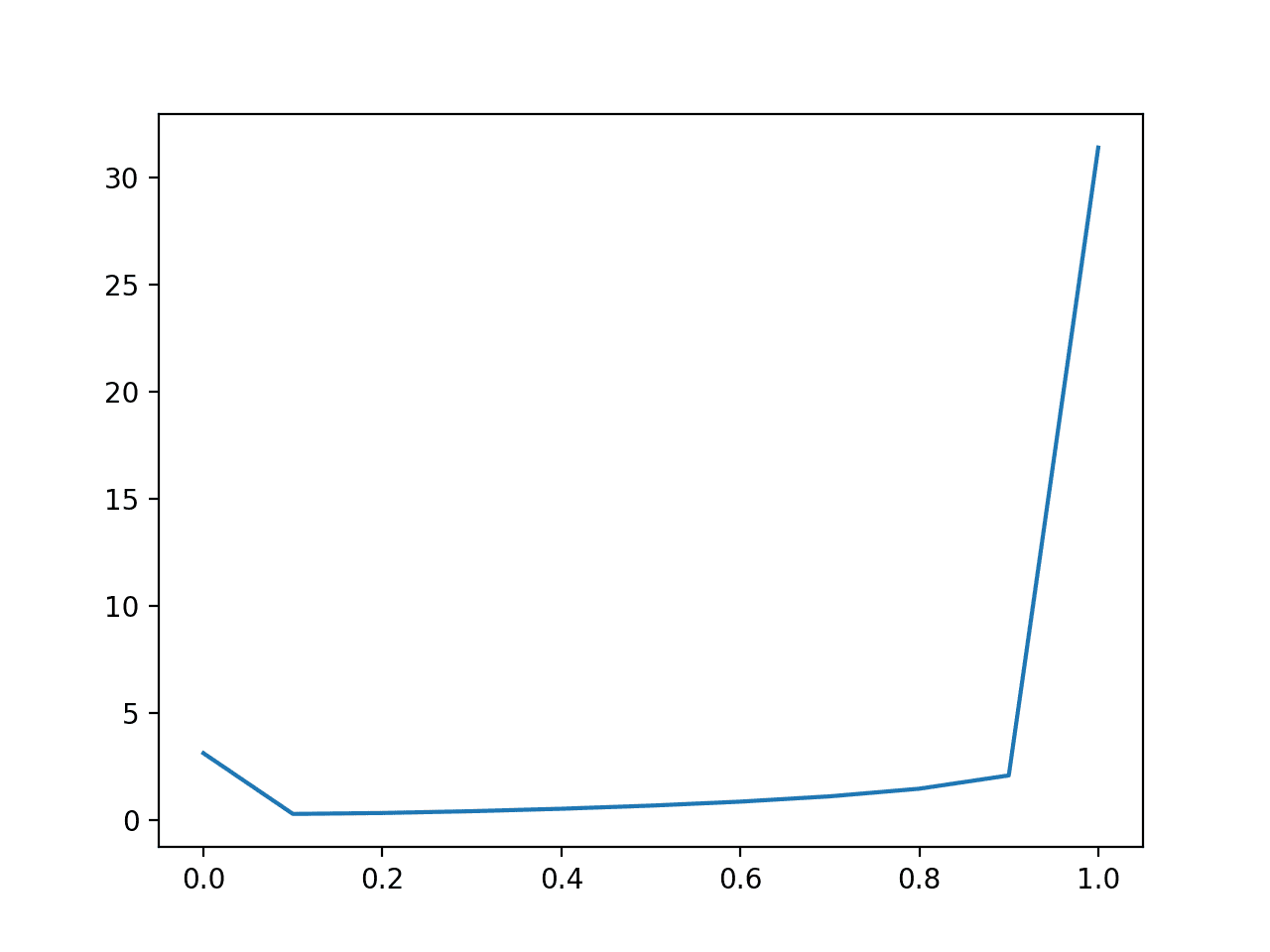 The Brier score, named for Glenn Brier, calculates the mean squared error between predicted probabilities and the expected values.

The score summarizes the magnitude of the error in the probability forecasts.

Predictions that are further away from the expected probability are penalized, but less severely as in the case of log loss.

The skill of a model can be summarized as the average Brier score across all probabilities predicted for a test dataset.

The Brier score can be calculated in Python using the brier_score_loss() function in scikit-learn. It takes the true class values (0, 1) and the predicted probabilities for all examples in a test dataset as arguments and returns the average Brier score.

We can evaluate the impact of prediction errors by comparing the Brier score for single probability forecasts in increasing error from 0.0 to 1.0.

Running the example creates a plot of the probability prediction error in absolute terms (x-axis) to the calculated Brier score (y axis).

We can see a familiar quadratic curve, increasing from 0 to 1 with the squared error. 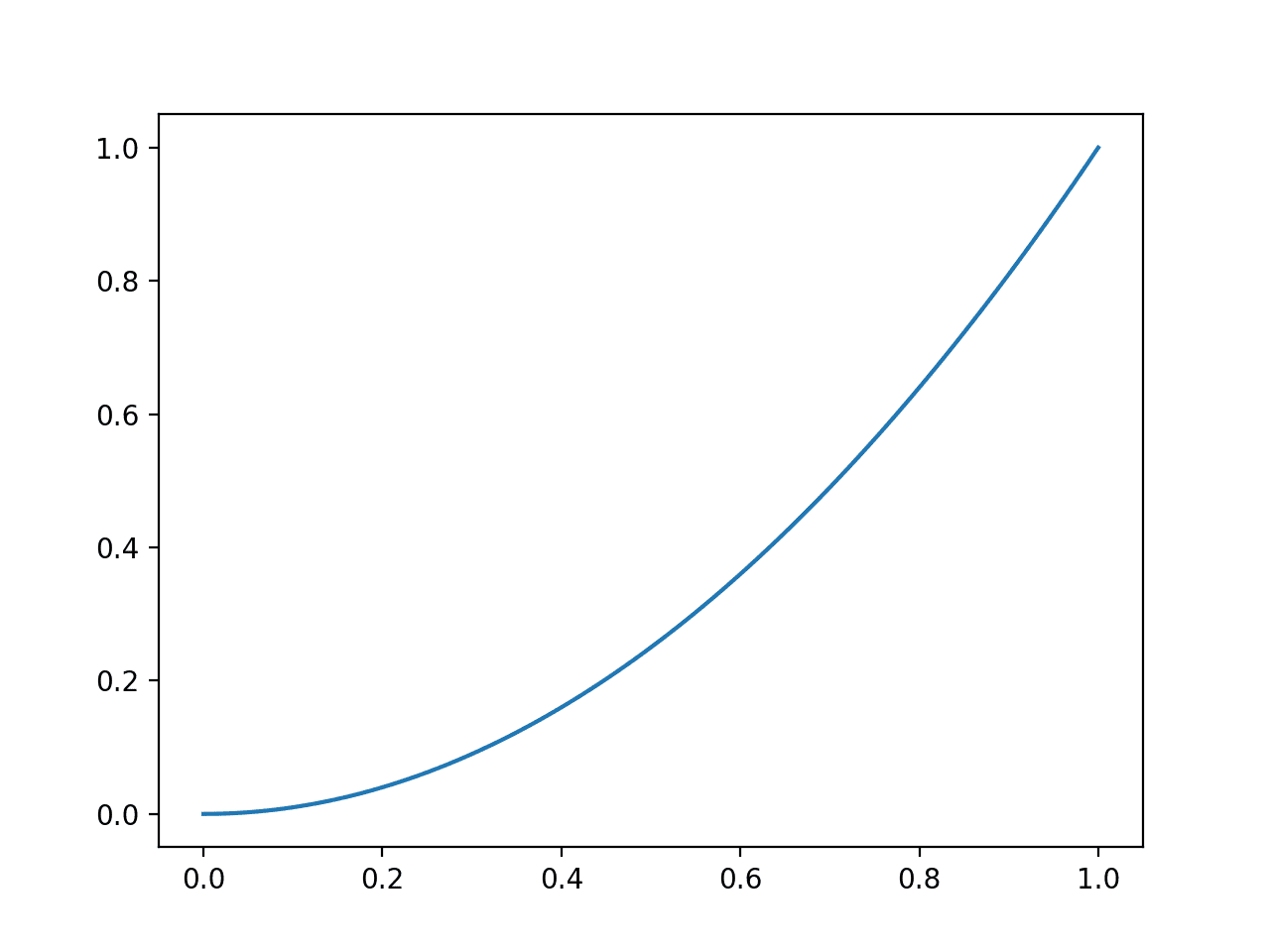 Model skill is reported as the average Brier across the predictions in a test dataset.

As with log loss, we can expect that the score will be suitable with a balanced dataset and misleading when there is a large imbalance between the two classes in the test set.

We can demonstrate this by comparing the distribution of loss values when predicting different constant probabilities for a balanced and an imbalanced dataset.

First, the example below predicts values from 0.0 to 1.0 in 0.1 increments for a balanced dataset of 50 examples of class 0 and 1.

Running the example, we can see that a model is better-off predicting middle of the road probabilities values like 0.5.

Unlike log loss that is quite flat for close probabilities, the parabolic shape shows the clear quadratic increase in the score penalty as the error is increased. 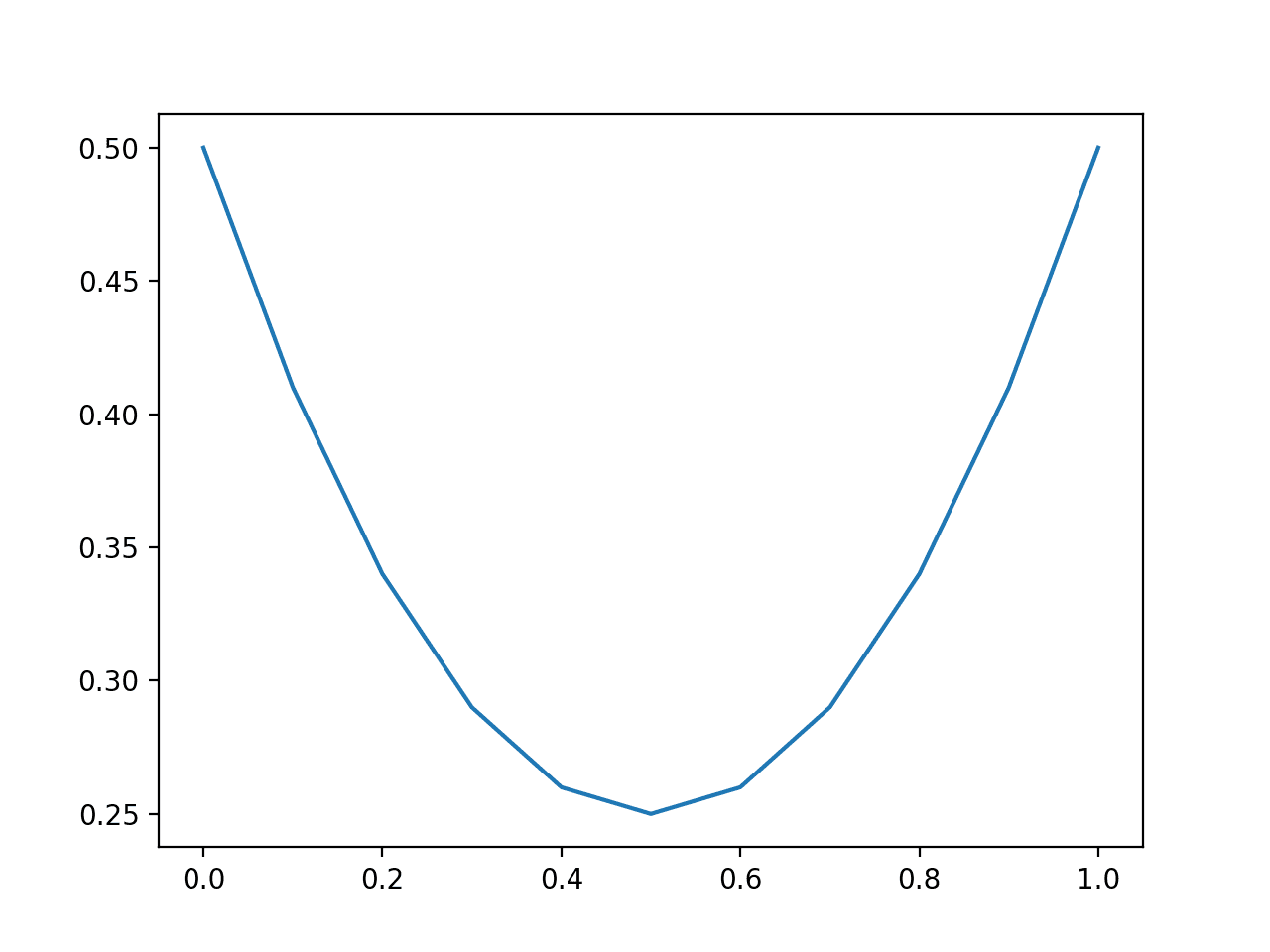 We can repeat this experiment with an imbalanced dataset with a 10:1 ratio of class 0 to class 1.

Running the example, we see a very different picture for the imbalanced dataset.

Like the average log loss, the average Brier score will present optimistic scores on an imbalanced dataset, rewarding small prediction values that reduce error on the majority class.

In these cases, Brier score should be compared relative to the naive prediction (e.g. the base rate of the minority class or 0.1 in the above example) or normalized by the naive score.

This latter example is common and is called the Brier Skill Score (BSS).

The Brier Skill Score reports the relative skill of the probability prediction over the naive forecast.

A good update to the scikit-learn API would be to add a parameter to the brier_score_loss() to support the calculation of the Brier Skill Score. 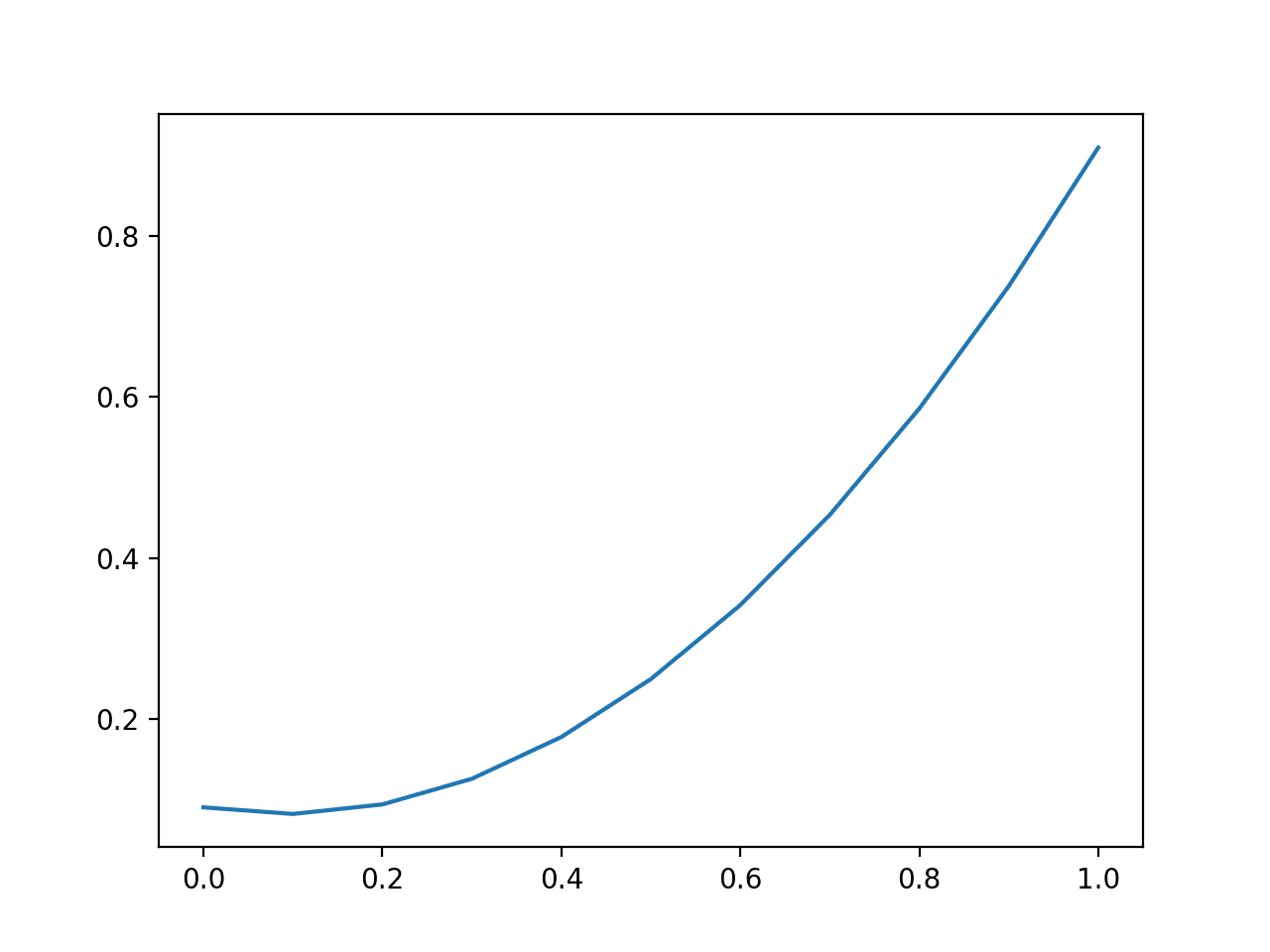 A predicted probability for a binary (two-class) classification problem can be interpreted with a threshold.

The threshold defines the point at which the probability is mapped to class 0 versus class 1, where the default threshold is 0.5. Alternate threshold values allow the model to be tuned for higher or lower false positives and false negatives.

The Receiver Operating Characteristic, or ROC, curve is a plot of the true positive rate versus the false positive rate for the predictions of a model for multiple thresholds between 0.0 and 1.0.

Predictions that have no skill for a given threshold are drawn on the diagonal of the plot from the bottom left to the top right. This line represents no-skill predictions for each threshold.

Models that have skill have a curve above this diagonal line that bows towards the top left corner.

Below is an example of fitting a logistic regression model on a binary classification problem and calculating and plotting the ROC curve for the predicted probabilities on a test set of 500 new data instances.

Running the example creates an example of a ROC curve that can be compared to the no skill line on the main diagonal. 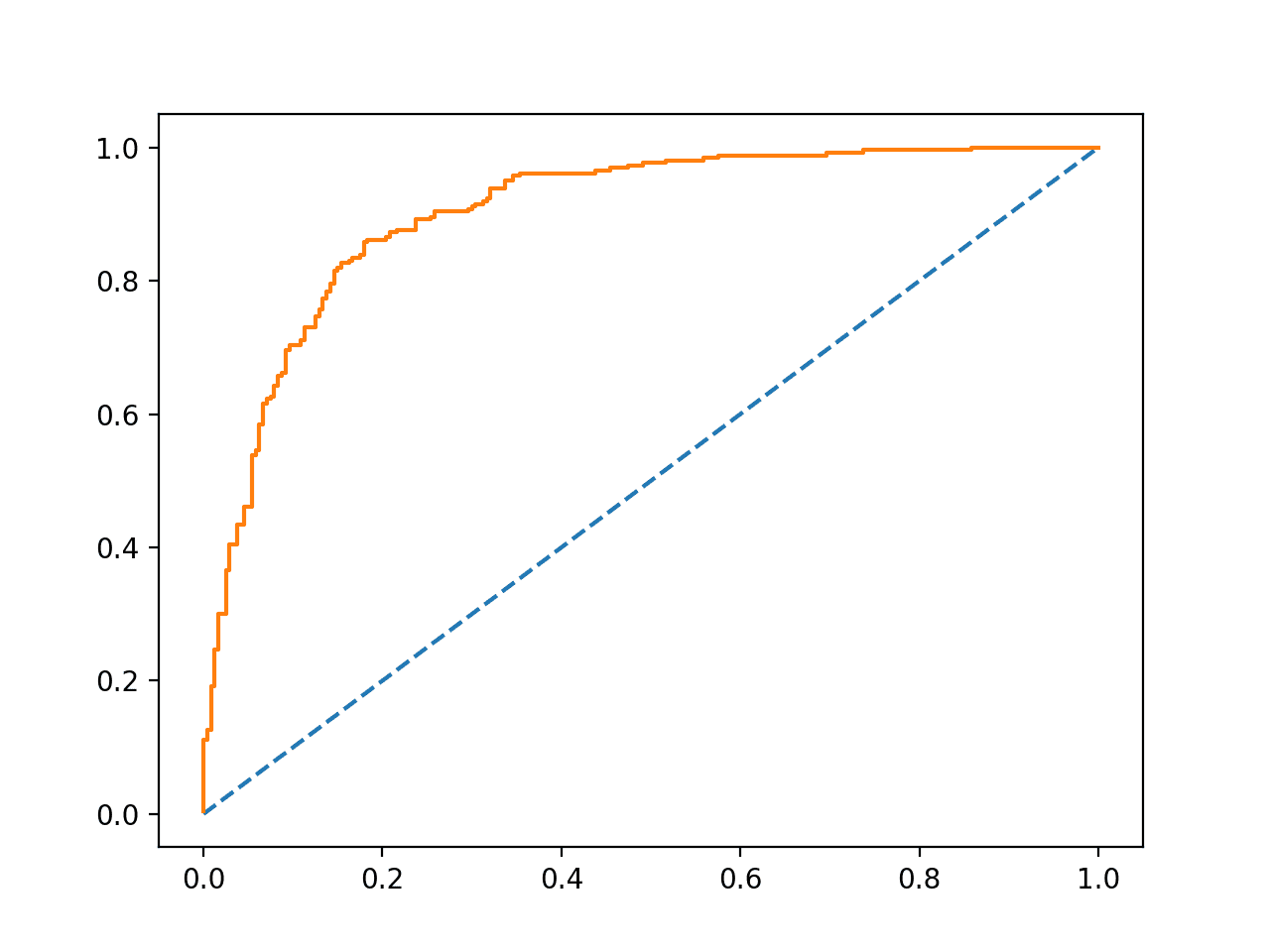 The integrated area under the ROC curve, called AUC or ROC AUC, provides a measure of the skill of the model across all evaluated thresholds.

Predictions by models that have a larger area have better skill across the thresholds, although the specific shape of the curves between models will vary, potentially offering opportunity to optimize models by a pre-chosen threshold. Typically, the threshold is chosen by the operator after the model has been prepared.

The AUC can be calculated in Python using the roc_auc_score() function in scikit-learn.

This function takes a list of true output values and predicted probabilities as arguments and returns the ROC AUC.

This is an instructive definition that offers two important intuitions:

Below, the example demonstrating the ROC curve is updated to calculate and display the AUC.

Running the example calculates and prints the ROC AUC for the logistic regression model evaluated on 500 new examples.

It might be a better tool for model selection rather than in quantifying the practical skill of a model’s predicted probabilities.

Predicted probabilities can be tuned to improve or even game a performance measure.

For example, the log loss and Brier scores quantify the average amount of error in the probabilities. As such, predicted probabilities can be tuned to improve these scores in a few ways:

Generally, it may be useful to review the calibration of the probabilities using tools like a reliability diagram. This can be achieved using the calibration_curve() function in scikit-learn.

In this tutorial, you discovered three metrics that you can use to evaluate the predicted probabilities on your classification predictive modeling problem.