By Jason Brownlee on November 1, 2019 in Probability

Maximum likelihood estimation is an approach to density estimation for a dataset by searching across probability distributions and their parameters.

It is a general and effective approach that underlies many machine learning algorithms, although it requires that the training dataset is complete, e.g. all relevant interacting random variables are present. Maximum likelihood becomes intractable if there are variables that interact with those in the dataset but were hidden or not observed, so-called latent variables.

The expectation-maximization algorithm is an approach for performing maximum likelihood estimation in the presence of latent variables. It does this by first estimating the values for the latent variables, then optimizing the model, then repeating these two steps until convergence. It is an effective and general approach and is most commonly used for density estimation with missing data, such as clustering algorithms like the Gaussian Mixture Model.

In this post, you will discover the expectation-maximization algorithm. 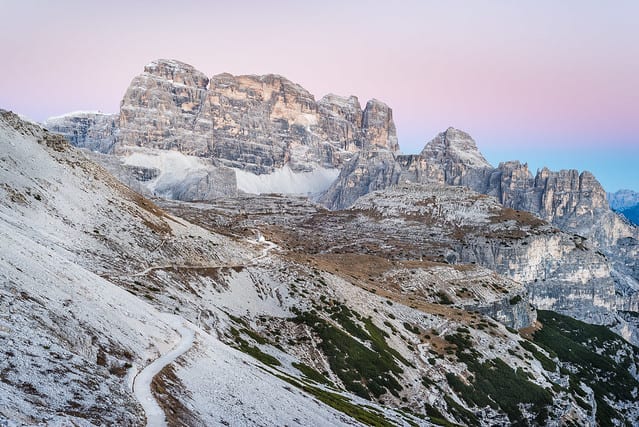 A common modeling problem involves how to estimate a joint probability distribution for a dataset.

Maximum Likelihood Estimation involves treating the problem as an optimization or search problem, where we seek a set of parameters that results in the best fit for the joint probability of the data sample.

A limitation of maximum likelihood estimation is that it assumes that the dataset is complete, or fully observed. This does not mean that the model has access to all data; instead, it assumes that all variables that are relevant to the problem are present.

This is not always the case. There may be datasets where only some of the relevant variables can be observed, and some cannot, and although they influence other random variables in the dataset, they remain hidden.

More generally, these unobserved or hidden variables are referred to as latent variables.

Many real-world problems have hidden variables (sometimes called latent variables), which are not observable in the data that are available for learning.

Conventional maximum likelihood estimation does not work well in the presence of latent variables.

… if we have missing data and/or latent variables, then computing the [maximum likelihood] estimate becomes hard.

Instead, an alternate formulation of maximum likelihood is required for searching for the appropriate model parameters in the presence of latent variables.

The Expectation-Maximization algorithm is one such approach.

The Expectation-Maximization Algorithm, or EM algorithm for short, is an approach for maximum likelihood estimation in the presence of latent variables.

The EM algorithm can be applied quite widely, although is perhaps most well known in machine learning for use in unsupervised learning problems, such as density estimation and clustering.

Perhaps the most discussed application of the EM algorithm is for clustering with a mixture model.

A mixture model is a model comprised of an unspecified combination of multiple probability distribution functions.

A statistical procedure or learning algorithm is used to estimate the parameters of the probability distributions to best fit the density of a given training dataset.

The Gaussian Mixture Model, or GMM for short, is a mixture model that uses a combination of Gaussian (Normal) probability distributions and requires the estimation of the mean and standard deviation parameters for each.

There are many techniques for estimating the parameters for a GMM, although a maximum likelihood estimate is perhaps the most common.

Consider the case where a dataset is comprised of many points that happen to be generated by two different processes. The points for each process have a Gaussian probability distribution, but the data is combined and the distributions are similar enough that it is not obvious to which distribution a given point may belong.

The processes used to generate the data point represents a latent variable, e.g. process 0 and process 1. It influences the data but is not observable. As such, the EM algorithm is an appropriate approach to use to estimate the parameters of the distributions.

In the EM algorithm, the estimation-step would estimate a value for the process latent variable for each data point, and the maximization step would optimize the parameters of the probability distributions in an attempt to best capture the density of the data. The process is repeated until a good set of latent values and a maximum likelihood is achieved that fits the data.

We can imagine how this optimization procedure could be constrained to just the distribution means, or generalized to a mixture of many different Gaussian distributions.

We can make the application of the EM algorithm to a Gaussian Mixture Model concrete with a worked example.

We can then plot a histogram of the points to give an intuition for the dataset. We expect to see a bimodal distribution with a peak for each of the means of the two distributions.

Running the example creates the dataset and then creates a histogram plot for the data points.

We can see that for many of the points in the middle of the two peaks that it is ambiguous as to which distribution they were drawn from. 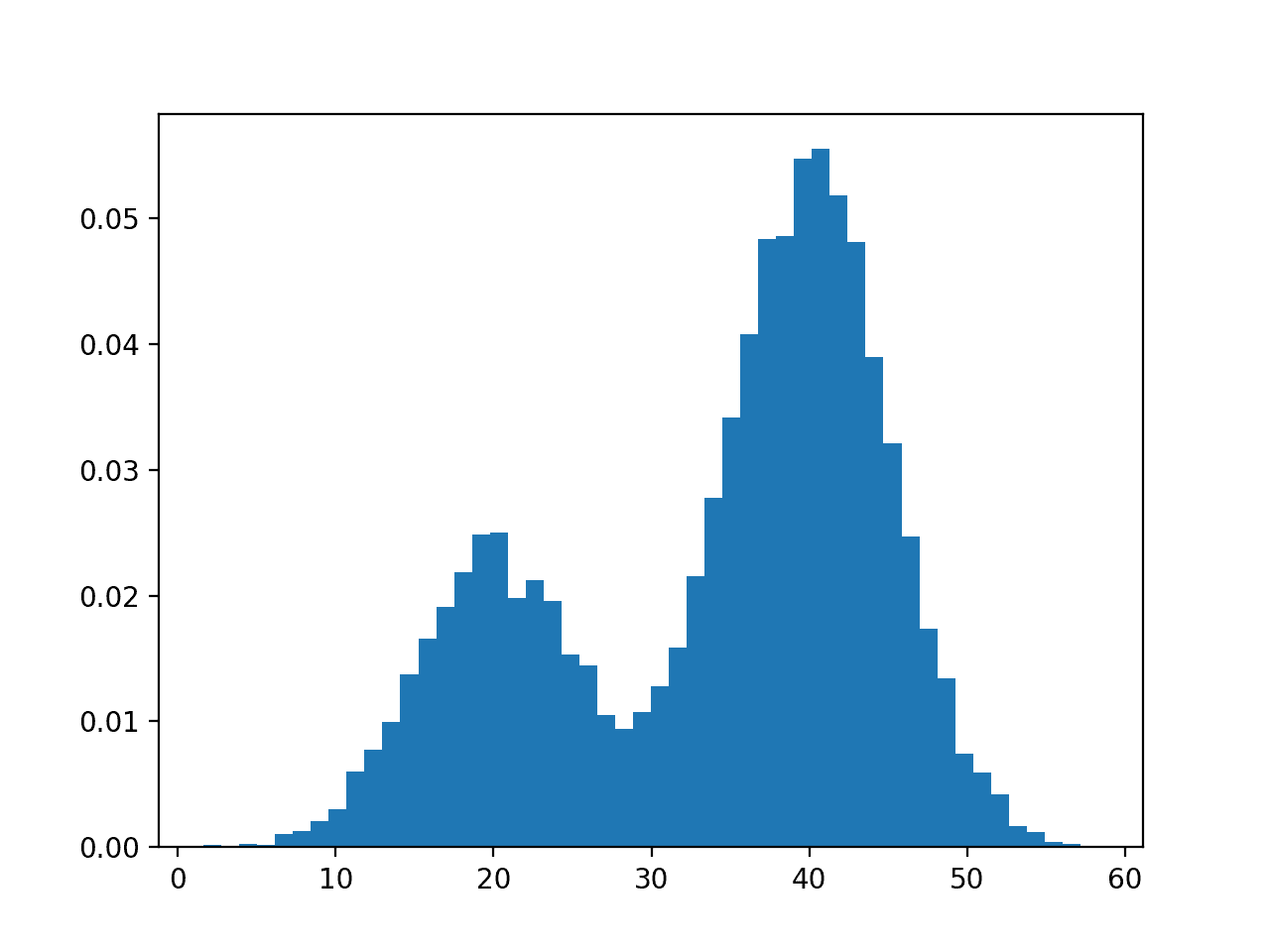 We can model the problem of estimating the density of this dataset using a Gaussian Mixture Model.

The GaussianMixture scikit-learn class can be used to model this problem and estimate the parameters of the distributions using the expectation-maximization algorithm.

The class allows us to specify the suspected number of underlying processes used to generate the data via the n_components argument when defining the model. We will set this to 2 for the two processes or distributions.

If the number of processes was not known, a range of different numbers of components could be tested and the model with the best fit could be chosen, where models could be evaluated using scores such as Akaike or Bayesian Information Criterion (AIC or BIC).

There are also many ways we can configure the model to incorporate other information we may know about the data, such as how to estimate initial values for the distributions. In this case, we will randomly guess the initial parameters, by setting the init_params argument to ‘random’.

Once the model is fit, we can access the learned parameters via arguments on the model, such as the means, covariances, mixing weights, and more.

More usefully, we can use the fit model to estimate the latent parameters for existing and new data points.

Running the example fits the Gaussian mixture model on the prepared dataset using the EM algorithm. Once fit, the model is used to predict the latent variable values for the examples in the training dataset.

In this case, we can see that at least for the first few and last few examples in the dataset, that the model mostly predicts the correct value for the latent variable. It’s a generally challenging problem and it is expected that the points between the peaks of the distribution will remain ambiguous and assigned to one process or another holistically.

Jason Brownlee, PhD is a machine learning specialist who teaches developers how to get results with modern machine learning methods via hands-on tutorials.
View all posts by Jason Brownlee →
Probabilistic Model Selection with AIC, BIC, and MDL
A Gentle Introduction to Monte Carlo Sampling for Probability

26 Responses to A Gentle Introduction to Expectation-Maximization (EM Algorithm)