An important decision point when working with a sample of data is whether to use parametric or nonparametric statistical methods.

There are a range of techniques that you can use to check if your data sample deviates from a Gaussian distribution, called normality tests.

In this tutorial, you will discover the importance of checking whether a data sample deviates from the normal distribution and a suite of techniques that you can use to evaluate your data sample. 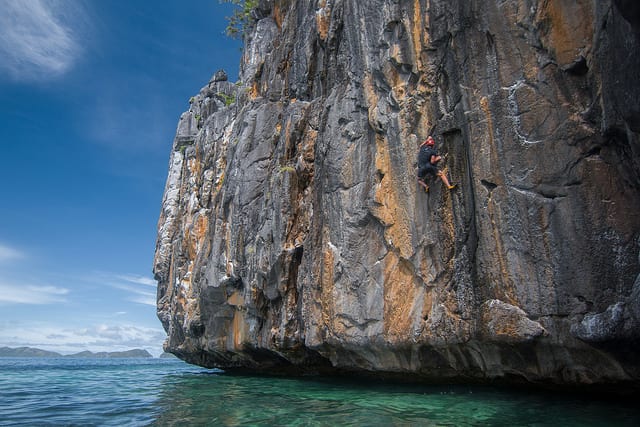 A Gentle Introduction to Normality Tests in Python
Photo by Ramoun Cabuhay, some rights reserved.

A large fraction of the field of statistics is concerned with data that assumes that it was drawn from a Gaussian distribution.

If methods are used that assume a Gaussian distribution, and your data was drawn from a different distribution, the findings may be misleading or plain wrong.

There are a number of techniques that you can check if your data sample is Gaussian or sufficiently Gaussian-like to use the standard techniques, or sufficiently non-Gaussian to instead use non-parametric statistical methods.

This is a key decision point when it comes to choosing statistical methods for your data sample. We can summarize this decision as follows:

There are three main areas where you may need to make this evaluation of a data sample in a machine learning project; they are:

In this tutorial, we will look at two classes of techniques for checking whether a sample of data is Gaussian:

Methods of this type are often called normality tests.

Before we start looking at normality tests, let’s first develop a test dataset that we can use throughout this tutorial.

We will generate a small sample of random numbers drawn from a Gaussian distribution.

The choice of Gaussian random numbers for the test dataset means that we do expect each test to correctly identify the distribution, nevertheless, the small-ish sample size may introduce some noise into the results.

Running the example generates the sample and prints the mean and standard deviation of the sample.

We can create plots of the data to check whether it is Gaussian.

These checks are qualitative, so less accurate than the statistical methods we will calculate in the next section. Nevertheless, they are fast and like the statistical tests, must still be interpreted before you can make a call about your data sample.

In this section, we will look at two common methods for visually inspecting a dataset to check if it was drawn from a Gaussian distribution.

A simple and commonly used plot to quickly check the distribution of a sample of data is the histogram.

In the histogram, the data is divided into a pre-specified number of groups called bins. The data is then sorted into each bin and the count of the number of observations in each bin is retained.

The plot shows the bins across the x-axis maintaining their ordinal relationship, and the count in each bin on the y-axis.

A sample of data has a Gaussian distribution of the histogram plot, showing the familiar bell shape.

A histogram can be created using the hist() matplotlib function. By default, the number of bins is automatically estimated from the data sample.

A complete example demonstrating the histogram plot on the test problem is listed below.

Running the example creates a histogram plot showing the number of observations in each bin.

We can see a Gaussian-like shape to the data, that although is not strongly the familiar bell-shape, is a rough approximation. 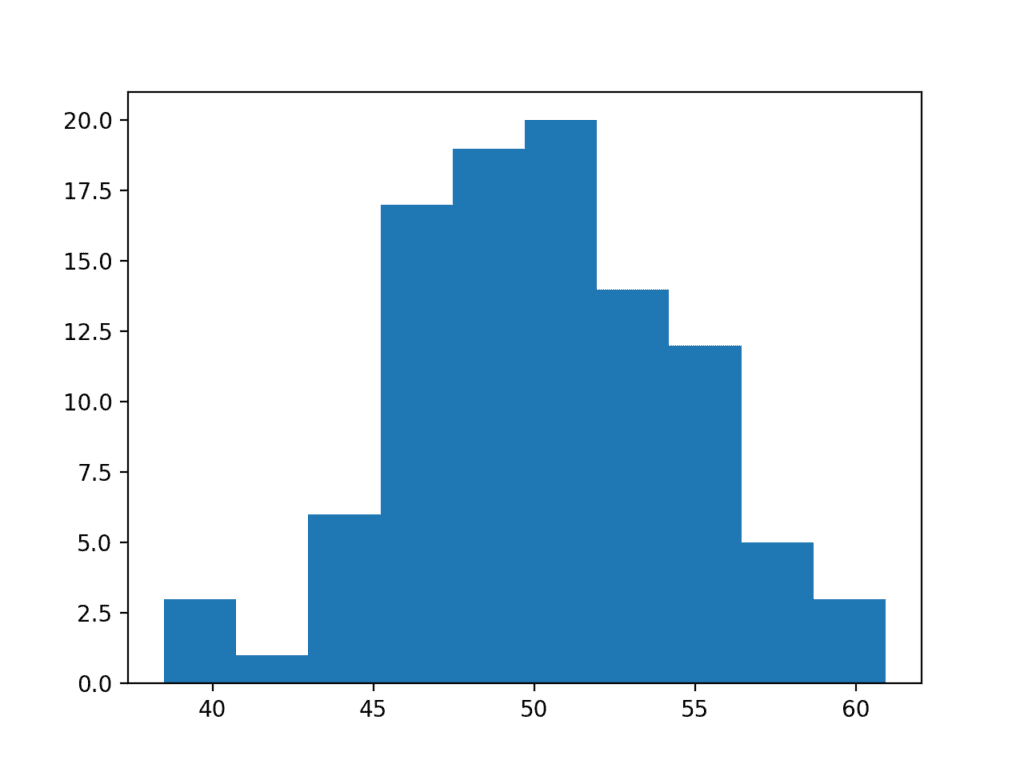 Another popular plot for checking the distribution of a data sample is the quantile-quantile plot, Q-Q plot, or QQ plot for short.

The resulting points are plotted as a scatter plot with the idealized value on the x-axis and the data sample on the y-axis.

A perfect match for the distribution will be shown by a line of dots on a 45-degree angle from the bottom left of the plot to the top right. Often a line is drawn on the plot to help make this expectation clear. Deviations by the dots from the line shows a deviation from the expected distribution.

We can develop a QQ plot in Python using the qqplot() statsmodels function. The function takes the data sample and by default assumes we are comparing it to a Gaussian distribution. We can draw the standardized line by setting the ‘line‘ argument to ‘s‘.

A complete example of plotting the test dataset as a QQ plot is provided below.

Running the example creates the QQ plot showing the scatter plot of points in a diagonal line, closely fitting the expected diagonal pattern for a sample from a Gaussian distribution.

There are a few small deviations, especially at the bottom of the plot, which is to be expected given the small data sample. 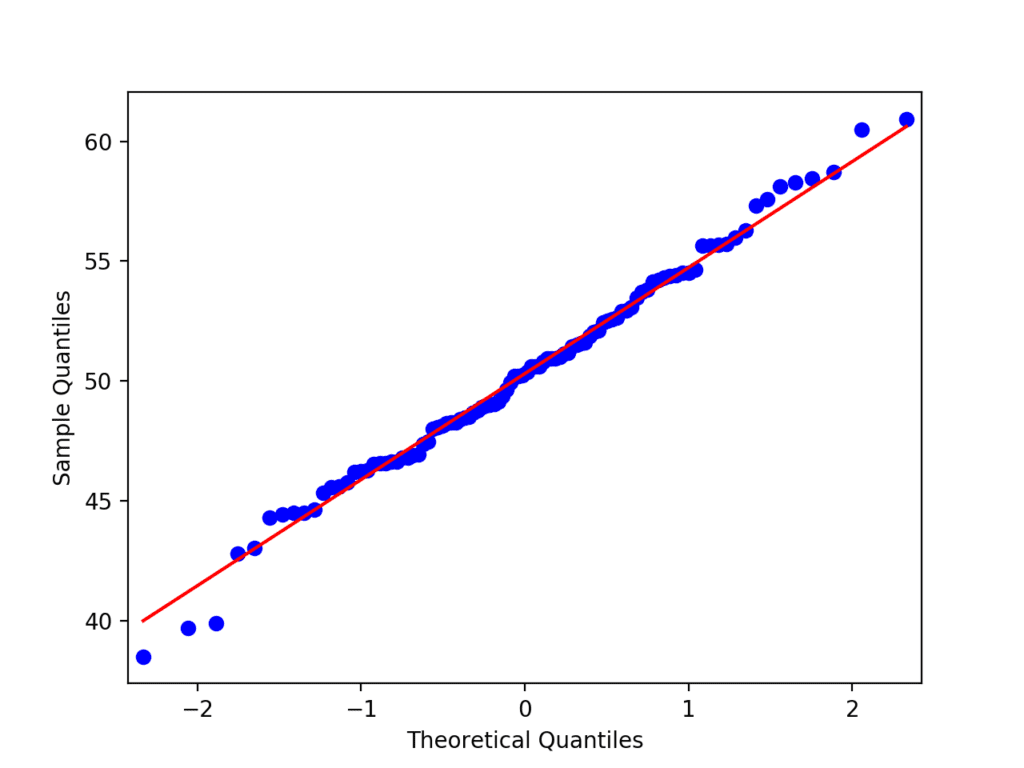 There are many statistical tests that we can use to quantify whether a sample of data looks as though it was drawn from a Gaussian distribution.

We will look at 3 commonly used tests in this section that you can apply to your own data samples.

Interpretation of a Test

Before you can apply the statistical tests, you must know how to interpret the results.

Each test will return at least two things:

Each test calculates a test-specific statistic. This statistic can aid in the interpretation of the result, although it may require a deeper proficiency with statistics and a deeper knowledge of the specific statistical test. Instead, the p-value can be used to quickly and accurately interpret the statistic in practical applications.

The tests assume that that the sample was drawn from a Gaussian distribution. Technically this is called the null hypothesis, or H0. A threshold level is chosen called alpha, typically 5% (or 0.05), that is used to interpret the p-value.

In the SciPy implementation of these tests, you can interpret the p value as follows.

This means that, in general, we are seeking results with a larger p-value to confirm that our sample was likely drawn from a Gaussian distribution.

A result above 5% does not mean that the null hypothesis is true. It means that it is very likely true given available evidence. The p-value is not the probability of the data fitting a Gaussian distribution; it can be thought of as a value that helps us interpret the statistical test.

The Shapiro-Wilk test evaluates a data sample and quantifies how likely it is that the data was drawn from a Gaussian distribution, named for Samuel Shapiro and Martin Wilk.

In practice, the Shapiro-Wilk test is believed to be a reliable test of normality, although there is some suggestion that the test may be suitable for smaller samples of data, e.g. thousands of observations or fewer.

The shapiro() SciPy function will calculate the Shapiro-Wilk on a given dataset. The function returns both the W-statistic calculated by the test and the p-value.

The complete example of performing the Shapiro-Wilk test on the dataset is listed below.

Running the example first calculates the test on the data sample, then prints the statistic and calculated p-value.

The p-value is interested and finds that the data is likely drawn from a Gaussian distribution.

The D’Agostino’s K^2 test calculates summary statistics from the data, namely kurtosis and skewness, to determine if the data distribution departs from the normal distribution, named for Ralph D’Agostino.

The D’Agostino’s K^2 test is available via the normaltest() SciPy function and returns the test statistic and the p-value.

The complete example of the D’Agostino’s K^2 test on the dataset is listed below.

The p-value is interpreted against an alpha of 5% and finds that the test dataset does not significantly deviate from normal.

Anderson-Darling Test is a statistical test that can be used to evaluate whether a data sample comes from one of among many known data samples, named for Theodore Anderson and Donald Darling.

It can be used to check whether a data sample is normal. The test is a modified version of a more sophisticated nonparametric goodness-of-fit statistical test called the Kolmogorov-Smirnov test.

A feature of the Anderson-Darling test is that it returns a list of critical values rather than a single p-value. This can provide the basis for a more thorough interpretation of the result.

The anderson() SciPy function implements the Anderson-Darling test. It takes as parameters the data sample and the name of the distribution to test it against. By default, the test will check against the Gaussian distribution (dist=’norm’).

The complete example of calculating the Anderson-Darling test on the sample problem is listed below.

Running the example calculates the statistic on the test data set and prints the critical values.

We can interpret the results by failing to reject the null hypothesis that the data is normal if the calculated test statistic is less than the critical value at a chosen significance level.

We can see that at each significance level, the test has found that the data follows a normal distribution

What Test Should You Use?

We have covered a few normality tests, but this is not all of the tests that exist.

So which test do you use?

I recommend using them all on your data, where appropriate.

The question then becomes, how do you interpret the results? What if the tests disagree, which they often will?

I have two suggestions for you to help think about this question.

Your data may not be normal for lots of different reasons. Each test looks at the question of whether a sample was drawn from a Gaussian distribution from a slightly different perspective.

A failure of one normality test means that your data is not normal. As simple as that.

You can either investigate why your data is not normal and perhaps use data preparation techniques to make the data more normal.

Or you can start looking into the use of nonparametric statistical methods instead of the parametric methods.

If some of the methods suggest that the sample is Gaussian and some not, then perhaps take this as an indication that your data is Gaussian-like.

In many situations, you can treat your data as though it is Gaussian and proceed with your chosen parametric statistical methods.

In this tutorial, you discovered the importance of checking whether a data sample deviates from the normal distribution and a suite of techniques that you can use to evaluate your data sample.

128 Responses to A Gentle Introduction to Normality Tests in Python