By Jason Brownlee on July 17, 2017 in Long Short-Term Memory Networks

Sequence prediction is a problem that involves using historical sequence information to predict the next value or values in the sequence.

The sequence may be symbols like letters in a sentence or real values like those in a time series of prices. Sequence prediction may be easiest to understand in the context of time series forecasting as the problem is already generally understood.

The learned mapping function is static and may be thought of as a program that takes input variables and uses internal variables. Internal variables are represented by an internal state maintained by the network and built up or accumulated over each value in the input sequence.

… RNNs combine the input vector with their state vector with a fixed (but learned) function to produce a new state vector. This can in programming terms be interpreted as running a fixed program with certain inputs and some internal variables.

The static mapping function may be defined with a different number of inputs or outputs, as we will review in the next section.

In this section, will review the 4 primary models for sequence prediction.

We will use the following terminology:

A one-to-one model produces one output value for each input value. 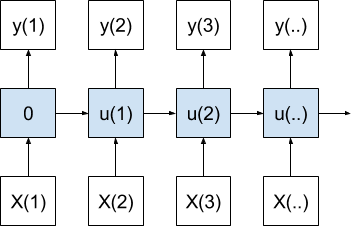 In the case of a sequence prediction, this model would produce one time step forecast for each observed time step received as input.

This is a poor use for RNNs as the model has no chance to learn over input or output time steps (e.g. BPTT). If you find implementing this model for sequence prediction, you may intend to be using a many-to-one model instead. 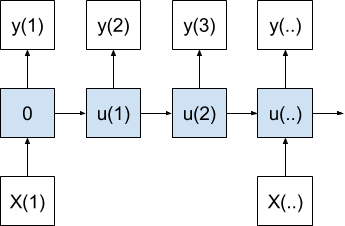 The internal state is accumulated as each value in the output sequence is produced.

This model can be used for image captioning where one image is provided as input and a sequence of words are generated as output. 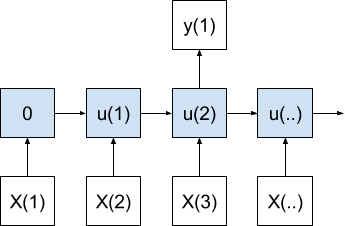 The internal state is accumulated with each input value before a final output value is produced.

In the case of time series, this model would use a sequence of recent observations to forecast the next time step. This architecture would represent the classical autoregressive time series model. 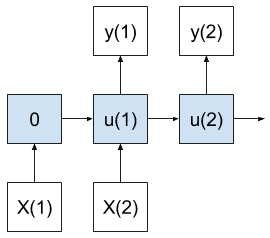 As with the many-to-one case, state is accumulated until the first output is created, but in this case multiple time steps are output.

In the case of time series forecasting, this model would use a sequence of recent observations to make a multi-step forecast.

In a sense, it combines the capabilities of the many-to-one and one-to-many models.

Cardinality from Timesteps (not Features!)

A common point of confusion is to conflate the above examples of sequence mapping models with multiple input and output features.

A sequence may be comprised of single values, one for each time step.

Alternately, a sequence could just as easily represent a vector of multiple observations at the time step. Each item in the vector for a time step may be thought of as its own separate time series. It does not affect the description of the models above.

The cardinality of the sequence prediction models defined above refers to time steps, not features (e.g. univariate or multivariate sequences).

The confusion of features vs time steps leads to two main misunderstandings when implementing recurrent neural networks by practitioners:

Observations at previous timesteps are framed as input features to the model.

This is the classical fixed-window-based approach of inputting sequence prediction problems used by multilayer Perceptrons. Instead, the sequence should be fed in one time step at a time.

This confusion may lead you to think you have implemented a many-to-one or many-to-many sequence prediction model when in fact you only have a single vector input for one time step.

Predictions at multiple future time steps are framed as output features to the model.

This is the classical fixed-window approach of making multi-step predictions used by multilayer Perceptrons and other machine learning algorithms. Instead, the sequence predictions should be generated one time step at a time.

This confusion may lead you to think you have implemented a one-to-many or many-to-many sequence prediction model when in fact you only have a single vector output for one time step (e.g. seq2vec not seq2seq).

Note: framing timesteps as features in sequence prediction problems is a valid strategy, and could lead to improved performance even when using recurrent neural networks (try it!). The important point here is to understand the common pitfalls and not trick yourself when framing your own prediction problems.

In this tutorial, you discovered the standard models for sequence prediction with recurrent neural networks.

Jason Brownlee, PhD is a machine learning specialist who teaches developers how to get results with modern machine learning methods via hands-on tutorials.
View all posts by Jason Brownlee →
What is the Difference Between Test and Validation Datasets?
5 Examples of Simple Sequence Prediction Problems for LSTMs