By Jason Brownlee on October 26, 2016 in Code Algorithms From Scratch

Linear regression is a prediction method that is more than 200 years old.

Simple linear regression is a great first machine learning algorithm to implement as it requires you to estimate properties from your training dataset, but is simple enough for beginners to understand.

In this tutorial, you will discover how to implement the simple linear regression algorithm from scratch in Python.

After completing this tutorial you will know: 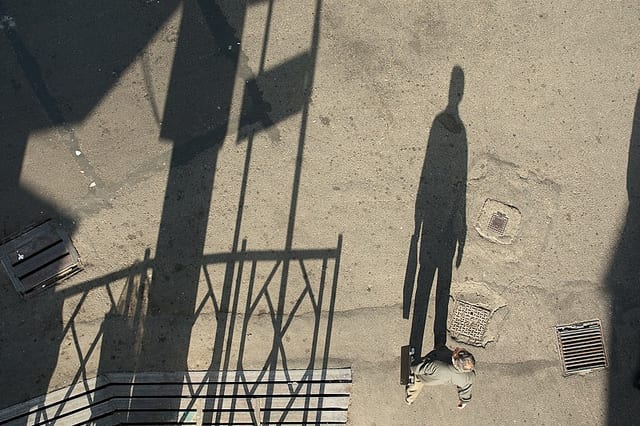 How To Implement Simple Linear Regression From Scratch With Python
Photo by Kamyar Adl, some rights reserved.

Linear regression assumes a linear or straight line relationship between the input variables (X) and the single output variable (y).

More specifically, that output (y) can be calculated from a linear combination of the input variables (X). When there is a single input variable, the method is referred to as a simple linear regression.

In simple linear regression we can use statistics on the training data to estimate the coefficients required by the model to make predictions on new data.

The line for a simple linear regression model can be written as:

where b0 and b1 are the coefficients we must estimate from the training data.

Once the coefficients are known, we can use this equation to estimate output values for y given new input examples of x.

It requires that you calculate statistical properties from the data such as mean, variance and covariance.

All the algebra has been taken care of and we are left with some arithmetic to implement to estimate the simple linear regression coefficients.

Briefly, we can estimate the coefficients as follows:

Don’t worry if this is not clear right now, these are the functions will implement in the tutorial.

We will use a real dataset to demonstrate simple linear regression.

The dataset is called the “Auto Insurance in Sweden” dataset and involves predicting the total payment for all the claims in thousands of Swedish Kronor (y) given the total number of claims (x).

This means that for a new number of claims (x) we will be able to predict the total payment of claims (y).

Here is a small sample of the first 5 records of the dataset.

Using the Zero Rule algorithm (that predicts the mean value) a Root Mean Squared Error or RMSE of about 81 (thousands of Kronor) is expected.

Below is a scatter plot of the entire dataset. 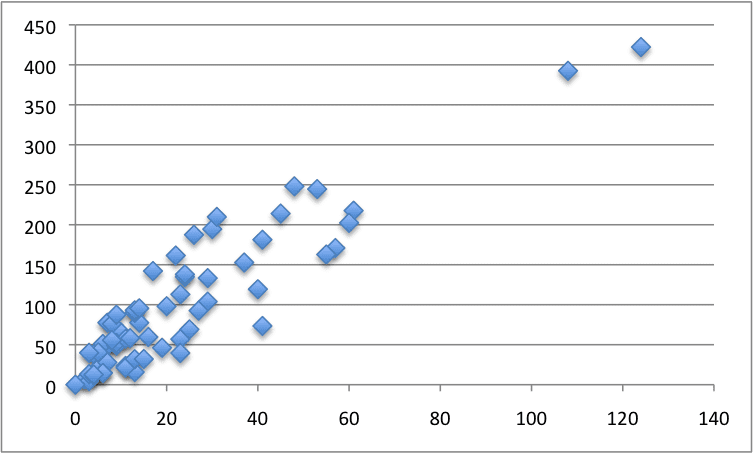 You can download the raw dataset from here or here.

Save it to a CSV file in your local working directory with the name “insurance.csv“.

Note, you may need to convert the European “,” to the decimal “.”. You will also need change the file from white-space-separated variables to CSV format.

This tutorial is broken down into five parts:

These steps will give you the foundation you need to implement and train simple linear regression models for your own prediction problems.

The first step is to estimate the mean and the variance of both the input and output variables from the training data.

The mean of a list of numbers can be calculated as:

Below is a function named mean() that implements this behavior for a list of numbers.

The variance is the sum squared difference for each value from the mean value.

Variance for a list of numbers can be calculated as:

Below is a function named variance() that calculates the sample variance of a list of numbers (Note that we are intentionally calculating the sum squared difference from the mean, instead of the average squared difference from the mean). It requires the mean of the list to be provided as an argument, just so we don’t have to calculate it more than once.

We can put these two functions together and test them on a small contrived dataset.

Below is a small dataset of x and y values.

NOTE: delete the column headers from this data if you save it to a .CSV file for use with the final code example.

We can plot this dataset on a scatter plot graph as follows: 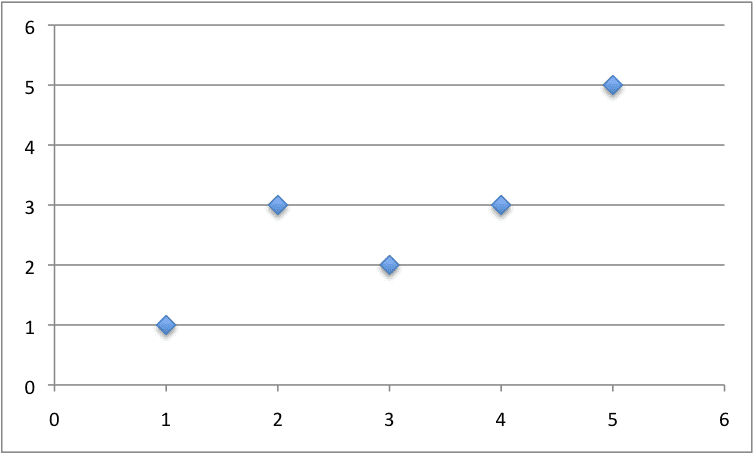 We can calculate the mean and variance for both the x and y values in the example below.

Running this example prints out the mean and variance for both columns.

This is our first step, next we need to put these values to use in calculating the covariance.

The covariance of two groups of numbers describes how those numbers change together.

Additionally, covariance can be normalized to produce a correlation value.

Nevertheless, we can calculate the covariance between two variables as follows:

Below is a function named covariance() that implements this statistic. It builds upon the previous step and takes the lists of x and y values as well as the mean of these values as arguments.

We can test the calculation of the covariance on the same small contrived dataset as in the previous section.

Putting it all together we get the example below.

Running this example prints the covariance for the x and y variables.

We now have all the pieces in place to calculate the coefficients for our model.

We must estimate the values for two coefficients in simple linear regression.

The first is B1 which can be estimated as:

We have learned some things above and can simplify this arithmetic to:

We already have functions to calculate covariance() and variance().

Next, we need to estimate a value for B0, also called the intercept as it controls the starting point of the line where it intersects the y-axis.

We can put all of this together into a function named coefficients() that takes the dataset as an argument and returns the coefficients.

We can put this together with all of the functions from the previous two steps and test out the calculation of coefficients.

Running this example calculates and prints the coefficients.

Now that we know how to estimate the coefficients, the next step is to use them.

The simple linear regression model is a line defined by coefficients estimated from training data.

Once the coefficients are estimated, we can use them to make predictions.

The equation to make predictions with a simple linear regression model is as follows:

Below is a function named simple_linear_regression() that implements the prediction equation to make predictions on a test dataset. It also ties together the estimation of the coefficients on training data from the steps above.

The coefficients prepared from the training data are used to make predictions on the test data, which are then returned.

Let’s pull together everything we have learned and make predictions for our simple contrived dataset.

The full example is listed below.

Running this example displays the following output that first lists the predictions and the RMSE of these predictions.

Finally, we can plot the predictions as a line and compare it to the original dataset. 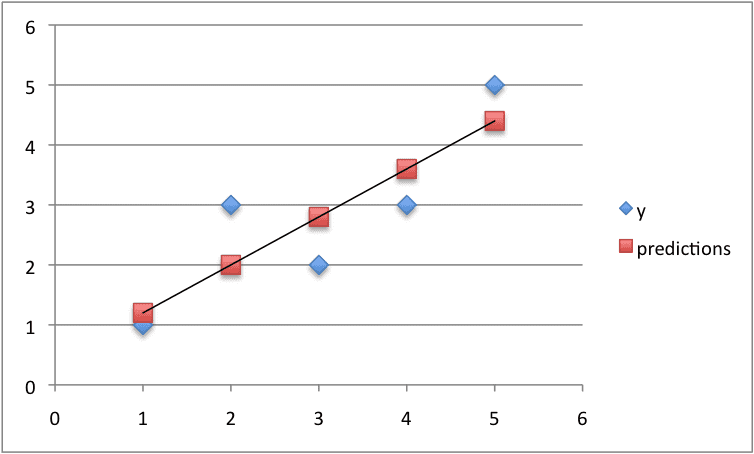 We now know how to implement a simple linear regression model.

Let’s apply it to the Swedish insurance dataset.

This section assumes that you have downloaded the dataset to the file insurance.csv and it is available in the current working directory.

We will add some convenience functions to the simple linear regression from the previous steps.

A training dataset of 60% of the data is used to prepare the model and predictions are made on the remaining 40%.

Running the algorithm prints the RMSE for the trained model on the training dataset.

The best extension to this tutorial is to try out the algorithm on more problems.

Small datasets with just an input (x) and output (y) columns are popular for demonstration in statistical books and courses. Many of these datasets are available online.

Did you apply simple linear regression to another dataset?
Share your experiences in the comments below.

In this tutorial, you discovered how to implement the simple linear regression algorithm from scratch in Python. 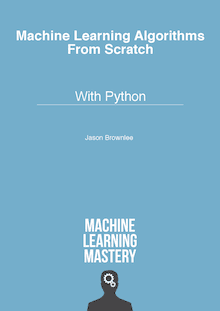