By Jason Brownlee on October 31, 2016 in Code Algorithms From Scratch

It is easy to implement, easy to understand and gets great results on a wide variety of problems, even when the expectations the method has of your data are violated.

In this tutorial, you will discover how to implement logistic regression with stochastic gradient descent from scratch with Python. 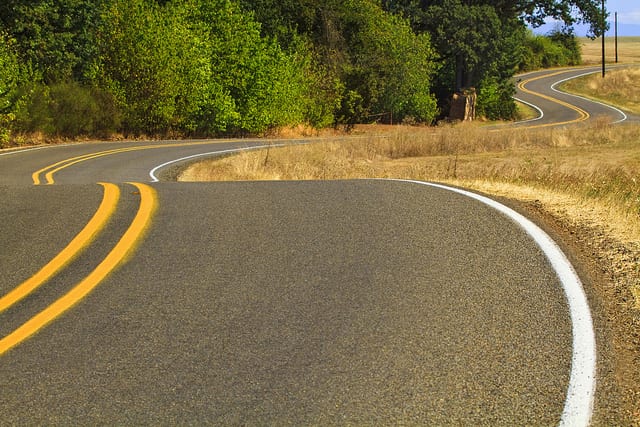 How To Implement Logistic Regression With Stochastic Gradient Descent From Scratch With Python
Photo by Ian Sane, some rights reserved.

This section will give a brief description of the logistic regression technique, stochastic gradient descent and the Pima Indians diabetes dataset we will use in this tutorial.

Logistic regression is named for the function used at the core of the method, the logistic function.

Logistic regression uses an equation as the representation, very much like linear regression. Input values (X) are combined linearly using weights or coefficient values to predict an output value (y).

A key difference from linear regression is that the output value being modeled is a binary value (0 or 1) rather than a numeric value.

This can be simplified as:

Where e is the base of the natural logarithms (Euler’s number), yhat is the predicted output, b0 is the bias or intercept term and b1 is the coefficient for the single input value (x1).

The yhat prediction is a real value between 0 and 1, that needs to be rounded to an integer value and mapped to a predicted class value.

Each column in your input data has an associated b coefficient (a constant real value) that must be learned from your training data. The actual representation of the model that you would store in memory or in a file are the coefficients in the equation (the beta value or b’s).

The coefficients of the logistic regression algorithm must be estimated from your training data.

In machine learning, we can use a technique that evaluates and updates the coefficients every iteration called stochastic gradient descent to minimize the error of a model on our training data.

This procedure can be used to find the set of coefficients in a model that result in the smallest error for the model on the training data. Each iteration, the coefficients (b) in machine learning language are updated using the equation:

The Pima Indians dataset involves predicting the onset of diabetes within 5 years in Pima Indians given basic medical details.

It is a binary classification problem, where the prediction is either 0 (no diabetes) or 1 (diabetes).

It contains 768 rows and 9 columns. All of the values in the file are numeric, specifically floating point values. Below is a small sample of the first few rows of the problem.

Predicting the majority class (Zero Rule Algorithm), the baseline performance on this problem is 65.098% classification accuracy.

Download the dataset and save it to your current working directory with the filename pima-indians-diabetes.csv.

This tutorial is broken down into 3 parts.

This will provide the foundation you need to implement and apply logistic regression with stochastic gradient descent on your own predictive modeling problems.

This will be needed both in the evaluation of candidate coefficient values in stochastic gradient descent and after the model is finalized and we wish to start making predictions on test data or new data.

Below is a function named predict() that predicts an output value for a row given a set of coefficients.

The first coefficient in is always the intercept, also called the bias or b0 as it is standalone and not responsible for a specific input value.

We can contrive a small dataset to test our predict() function.

Below is a plot of the dataset using different colors to show the different classes for each point. 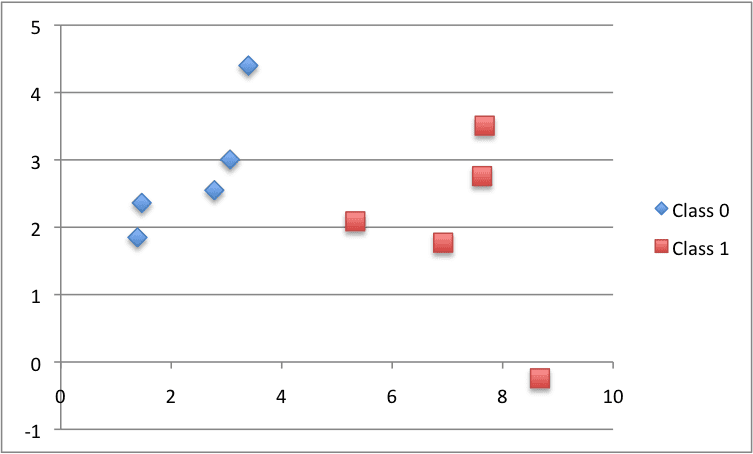 We can also use previously prepared coefficients to make predictions for this dataset.

There are two inputs values (X1 and X2) and three coefficient values (b0, b1 and b2). The prediction equation we have modeled for this problem is:

or, with the specific coefficient values we chose by hand as:

Running this function we get predictions that are reasonably close to the expected output (y) values and when rounded make correct predictions of the class.

Now we are ready to implement stochastic gradient descent to optimize our coefficient values.

We can estimate the coefficient values for our training data using stochastic gradient descent.

As you can see, we update each coefficient for each row in the training data, each epoch.

Coefficients are updated based on the error the model made. The error is calculated as the difference between the expected output value and the prediction made with the candidate coefficients.

There is one coefficient to weight each input attribute, and these are updated in a consistent way, for example:

The special coefficient at the beginning of the list, also called the intercept, is updated in a similar way, except without an input as it is not associated with a specific input value:

Now we can put all of this together. Below is a function named coefficients_sgd() that calculates coefficient values for a training dataset using stochastic gradient descent.

You can see, that in addition, we keep track of the sum of the squared error (a positive value) each epoch so that we can print out a nice message each outer loop.

We use a larger learning rate of 0.3 and train the model for 100 epochs, or 100 exposures of the coefficients to the entire training dataset.

Running the example prints a message each epoch with the sum squared error for that epoch and the final set of coefficients.

You can see how error continues to drop even in the final epoch. We could probably train for a lot longer (more epochs) or increase the amount we update the coefficients each epoch (higher learning rate).

Experiment and see what you come up with.

In this section, we will train a logistic regression model using stochastic gradient descent on the diabetes dataset.

The example assumes that a CSV copy of the dataset is in the current working directory with the filename pima-indians-diabetes.csv.

The dataset is first loaded, the string values converted to numeric and each column is normalized to values in the range of 0 to 1. This is achieved with the helper functions load_csv() and str_column_to_float() to load and prepare the dataset and dataset_minmax() and normalize_dataset() to normalize it.

We will use the predict(), coefficients_sgd() functions created above and a new logistic_regression() function to train the model.

A k value of 5 was used for cross-validation, giving each fold 768/5 = 153.6 or just over 150 records to be evaluated upon each iteration. A learning rate of 0.1 and 100 training epochs were chosen with a little experimentation.

Running this example prints the scores for each of the 5 cross-validation folds, then prints the mean classification accuracy.

We can see that the accuracy is about 77%, higher than the baseline value of 65% if we just predicted the majority class using the Zero Rule Algorithm.

This section lists a number of extensions to this tutorial that you may wish to consider exploring.

In this tutorial, you discovered how to implement logistic regression using stochastic gradient descent from scratch with Python.

Jason Brownlee, PhD is a machine learning specialist who teaches developers how to get results with modern machine learning methods via hands-on tutorials.
View all posts by Jason Brownlee →
How to Implement Linear Regression From Scratch in Python
Python is the Growing Platform for Applied Machine Learning