Whether it is a supervised learning problem or an unsupervised problem, there will be some optimization algorithm working in the background. Almost any classification, regression or clustering problem can be cast as an optimization problem.

In this tutorial, you will discover what is optimization and concepts related to it. 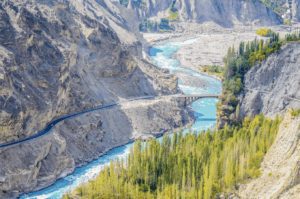 A gentle introduction to optimization. Photo by Mehtab Farooq, some rights reserved.

What Is Optimization or Mathematical Programming?

In calculus and mathematics, the optimization problem is also termed as mathematical programming. To describe this problem in simple words, it is the mechanism through which we can find an element, variable or quantity that best fits a set of given criterion or constraints.

Or we can have an equivalent maximization problem.

When we define functions quantifying errors or penalties, we apply a minimization problem. On the other hand, if a learning algorithm constructs a function modeling the accuracy of a method, we would maximize this function.

As the two problems are equivalent, we’ll only talk about either minimization or maximization problems in the rest of the tutorial. The same rules and definitions apply to its equivalent.

In machine learning, we often encounter functions, which are highly non-linear with a complex landscape. It is possible that there is a point where the function has the lowest value within a small or local region around that point. Such a point is called a local minimum point.

This is opposed to global minimum point, which is a point where the function has the least value over its entire domain. The following figure shows local and global maximum points. 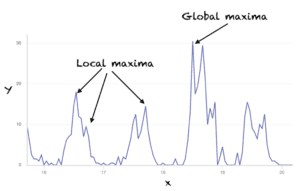 There are many problems in machine learning, where we are interested in finding the global optimum point without any constraints or restrictions on the region in space. Such problems are called unconstrained optimization problems.

Examples of constrained optimization are:

For an unconstrained optimization problem, the entire domain of the function is a feasible region.

An optimization problem where the function is linear and all equality or inequality constraints are also linear constraints is called a linear programming problem.

To visualize the difference between linear and non-linear functions you can check out the figure below. 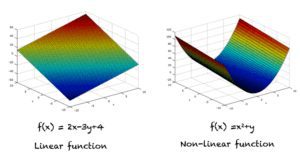 Examples of Optimization in Machine Learning

This section provides more resources on the topic if you are looking to go   deeper.

In this tutorial, you discovered what is mathematical programming or optimization problem. Specifically, you learned:

8 Responses to A Gentle Introduction to Optimization / Mathematical Programming