By Jason Brownlee on May 10, 2014 in Start Machine Learning

A question I get asked a lot is:

What is the best programming language for machine learning?

I’ve replied to this question many times now it’s about time to explore this further in a blog post.

Ultimately, the programming language you use for machine learning should consider your own requirements and predilections. No one can meaningfully address those concerns for you.

No one can meaningfully address those concerns for you.

What Languages Are Being Used

Before I give you my opinion, it is good to have  a look around to see what languages and platforms are popular in self-selected communities of data analysis and machine learning professionals.

KDnuggets has had language polls forever. A recent poll is titled “What programming/statistics languages you used for an analytics / data mining / data science work in 2013“. The trends are almost identical to the previous year. The results suggest heavy use of R and Python and SQL for data access. SAS and MATLAB rank higher than I would have expected. I’d expect SAS accounts for larger corporate (Fortune 500) data analysis and MATLAB for engineering, research and student use. 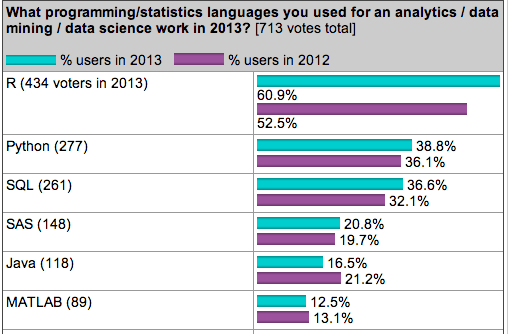 The most popular platforms for machine learning, taken from the KDnuggets 2013 poll.

Kaggle offer machine learning competitions and have polled their user base as to the tools and programming languages used by participants in competitions. They posted results in 2011 titled Kagglers’ Favorite Tools (also see the forum discussion). The results suggested the abundant use of R. The results also show good use of MATLAB and SAS with much lower Python representation. I can attest that I prefer R over Python for competition work. It just feels though it has more on offer in terms of data analysis and algorithm selection. 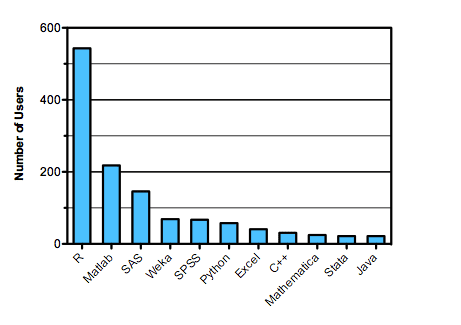 The most popular tools used on Kaggle, the machine learning competition website.

Ben Hamner, Kaggle Admin and author of the blog post above on the Kaggle blog goes into more detail on the options when it comes to programming languages for machine learning in a forum post titled “What tools do people generally use to solve problems“.

Ben comments that MATLAB/Octave is a good language for matrix operations and can be good when working with a well defined feature matrix. Python is fragmented by comprehensive and can be very slow unless you drop into C. He prefers Python when not working with a well defined feature matrix and uses Pandas and NLTK. Ben comments that “As a general rule, if it’s found to be interesting for statisticians, it’s been implemented in R” (well said). He also complains about the language itself being ugly and painful to work with. Finally, Ben comments on Julia that doesn’t have much to offer in the way of libraries but is his new favorite language. He comments that it has the conciseness of languages like MATLAB and Python with the speed of C.

Anthony Goldbloom, the CEO of Kaggle gave a presentation to the Bay Area R user group in 2011 on the popularity of R in Kaggle competitions titled Predictive modeling competitions: making data science a sport (see the powerpoint slides). The presentation slides give more detail on the use of programming languages and suggest an Other category that is as close to as large as large as the usage of R. It would be nice to have the raw data that was collected (why didn’t they release it to their own data community, seriously!?). 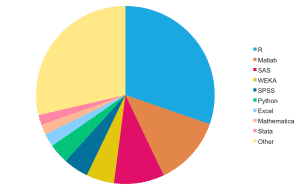 John Langford on his blog Hunch has an excellent article on the properties of a programming language to consider when working with machine learning algorithms titled “Programming Languages for Machine Learning Implementations“. He divides the properties into concerns of speed and the concerns of programability (programming ease). He points to powerful industry standard implementations of algorithms, all in C and comments that he has not used R or MATLAB (the post was written 8 years ago). Take some time and read some of the comments by academics and industry specialists alike. This is a deep and nuanced problem that really comes down to the specifics of the problem you are solving and the environment in which you are solving it.

I think of programming languages in the context of the machine learning activities I want to perform.

I think MATLAB is excellent for representing and working with matrices. As such, I think it’s an excellent language or platform to use when climbing into the linear algebra of a given method. I think it’s suited to learning about algorithms both superficially the first time around and deeply when you are trying to figure something out or go deep into the method. For example, it’s popular in university courses for beginners, like Andrew Ng’s Coursera Machine Learning course.

R is a workhorse for statistical analysis and by extension machine learning. Much talk is given to the learning curve, I didn’t really see the problem. It is the platform to use to understand and explore your data using statistical methods and graphs. It has an enormous number of machine learning algorithms, and advanced implementations too written by the developers of the algorithm.

I think you can explore, model and prototype with R. I think it suits one-off projects with an artifact like a set of predictions, report or research paper. For example, it is the most popular platform for machine learning competitors such as Kaggle.

Python if a popular scientific language and a rising star for machine learning. I’d be surprised if it can take the data analysis mantle from R, but matrix handling in NumPy may challenge MATLAB and communication tools like IPython are very attractive and a step into the future of reproducibility.

I think the SciPy stack for machine learning and data analysis can be used for one-off projects (like papers), and frameworks like scikit-learn are mature enough to be used in production systems.

There are robust libraries, for example, Java has Weka and Mahout. Also, note that the deeper implementations of core algorithms like regression (LIBLINEAR) and SVM (LIBSVM) are written in C and leveraged by Python and other toolkits. I think you are serious you may prototype in R or Python, but you will implement in a heavier language for reasons such as execution speed and system reliability. For example, the backend of BigML is implemented in Clojure.

The question of machine learning programming language is popular on blogs and question and answer sites. A few choice discussions include:

What programming language do you use for machine learning and data analysis why do you recommend it?

I’m keen to hear your thoughts, leave a comment.