Calculus for Machine Learning Crash Course.
Get familiar with the calculus techniques in machine learning in 7 days.

As a practitioner, we are most likely not going to encounter very hard calculus problems. If we need to do one, there are tools such as computer algebra systems to help, or at least, verify our solution. However, what is more important is understanding the idea behind calculus and relating the calculus terms to its use in our machine learning algorithms.

In this crash course, you will discover some common calculus ideas used in machine learning. You will learn with exercises in Python in seven days. 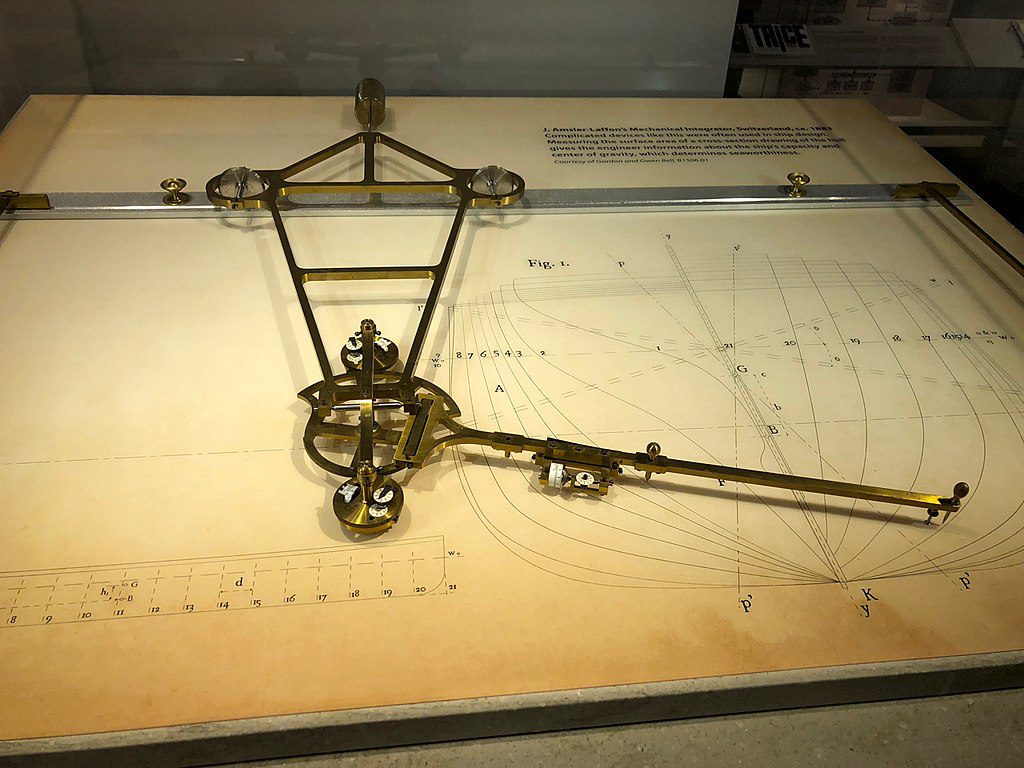 Who Is This Crash-Course For?

Before we get started, let’s make sure you are in the right place.

This course is for developers who may know some applied machine learning. Maybe you know how to work through a predictive modeling problem end to end, or at least most of the main steps, with popular tools.

The lessons in this course do assume a few things about you, such as:

You do NOT need to be:

Note: This crash course assumes you have a working Python 3.7 environment with some libraries such as SciPy and SymPy installed. If you need help with your environment, you can follow the step-by-step tutorial here:

This crash course is broken down into seven lessons.

You could complete one lesson per day (recommended) or complete all of the lessons in one day (hardcore). It really depends on the time you have available and your level of enthusiasm.

Below is a list of the seven lessons that will get you started and productive with data preparation in Python:

Each lesson could take you 5 minutes or up to 1 hour. Take your time and complete the lessons at your own pace. Ask questions, and even post results in the comments below.

The lessons might expect you to go off and find out how to do things. I will give you hints, but part of the point of each lesson is to force you to learn where to go to look for help with and about the algorithms and the best-of-breed tools in Python. (Hint: I have all of the answers on this blog; use the search box.)

Post your results in the comments; I’ll cheer you on!

Hang in there; don’t give up.

In this lesson, you will discover what is differential calculus or differentiation.

Differentiation is the operation of transforming one mathematical function to another, called the derivative. The derivative tells the slope, or the rate of change, of the original function.

Usually we will define the above in the form of a limit, i.e.,

to mean $\delta x$ should be as close to zero as possible.

In the plot above, we can see the derivative function found using the rate of change and then using the rule of differentiation coincide perfectly.

In the next lesson, you will discover that integration is the reverse of differentiation.

In this lesson, you will discover integration is the reverse of differentiation.

Obviously, if we have a smaller step $\delta x$, there are more terms in the above.

If we multiply each of the above with the step size and then add them up, i.e., 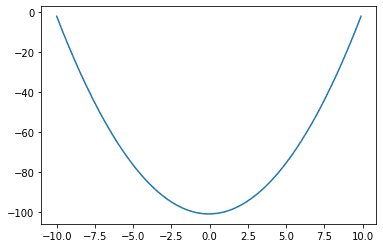 This plot has the same shape as $f(x)$ in Lesson 01. Indeed, all functions differ by a constant (e.g., $f(x)$ and $f(x)+5$) that have the same derivative. Hence the plot of the antiderivative computed will be the original shifted vertically.

Consider $f(x)=3x^2-4x$, find the antiderivative of this function and plot it. Also, try to replace the Python code above with this function. If you plot both together, you should see the following: 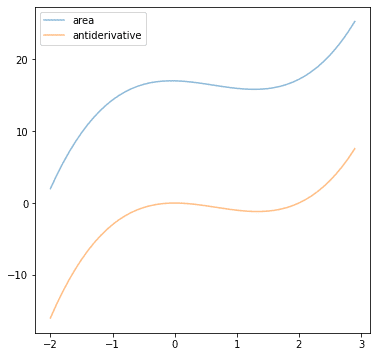 Lesson 03: Gradient of a vector function

In this lesson, you will learn the concept of gradient of a multivariate function.

Here we introduced the notation of a partial derivative, meaning to differentiate a function on one variable while assuming the other variables are constants. Hence in the above, when we compute $\frac{\partial f}{\partial x}$, we ignored the $y^3$ part in the function $f(x,y)$. 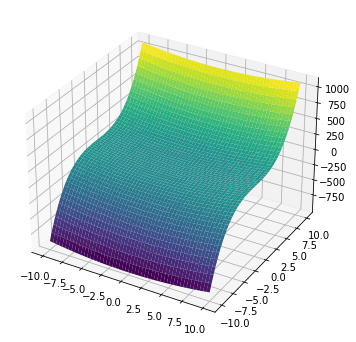 The gradient of this function is denoted as:

Therefore, at each coordinate $(x,y)$, the gradient $\nabla f(x,y)$ is a vector. This vector tells us two things:

One way to visualize the gradient is to consider it as a vector field: 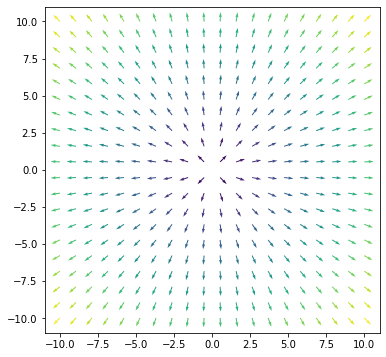 The viridis color map in matplotlib will show a larger value in yellow and a lower value in purple. Hence we see the gradient is “steeper” at the edges than in the center in the above plot.

If we consider the coordinate (2,3), we can check which direction $f(x,y)$ will increase the fastest using the following:

The gradient vector according to the formula is (4,27), which the numerical result above is close enough.

Consider the function $f(x,y)=x^2+y^2$, what is the gradient vector at (1,1)? If you get the answer from partial differentiation, can you modify the above Python code to confirm it by checking the rate of change at different directions?

In the next lesson, you will discover the differentiation of a function that takes vector input and produces vector output.

In this lesson, you will learn about Jacobian matrix.

The function $f(x,y)=(p(x,y), q(x,y))=(2xy, x^2y)$ is one with two input and two outputs. Sometimes we call this function taking vector arguments and returning a vector value. The differentiation of this function is a matrix called the Jacobian. The Jacobian of the above function is:

We will see the use of Jacobian later. Since finding a Jacobian matrix involves a lot of partial differentiations, it would be great if we could let a computer check our math. In Python, we can verify the above result using SymPy:

We asked SymPy to define the symbols x and y and then defined the vector function f. Afterward, the Jacobian can be found by calling the jacobian() function.

where $p,q,r,s,t,u$ are constants. What is the Jacobian matrix of $f(x,y)$? Can you verify it with SymPy?

In the next lesson, you will discover the application of the Jacobian matrix in a neural network’s backpropagation algorithm.

In this lesson, you will see how the backpropagation algorithm uses the Jacobian matrix.

If we consider a neural network with one hidden layer, we can represent it as a function:

This is how the backpropagation algorithm works in training a neural network! For a network with multiple hidden layers, we need to compute the Jacobian matrix for each layer.

The code below implements a neural network model that you can try yourself. It has two hidden layers and a classification network to separate points in 2-dimension into two classes. Try to look at the function backward() and identify which is the Jacobian matrix.

If you play with this code, the class mlp should not be modified, but you can change the parameters on how a model is created.

In the next lesson, you will discover the use of differentiation to find the optimal value of a function.

In this lesson, you will learn an important use of differentiation.

If a function attained its maximum, we would expect it to move from a lower point to the maximum, and if we move further, it falls to another lower point. Hence at the point of maximum, the rate of change of a function is zero. And vice versa for the minimum.

Consider the function $f(x)=\log x$ and find its derivative. What will be the value of $x$ when $f'(x)=0$? What does it tell you about the maximum or minimum of the log function? Try to plot the function of $\log x$ to visually confirm your answer.

In the next lesson, you will discover the application of this technique in finding the support vector.

In this lesson, you will learn how we can convert support vector machine into an optimization problem.

In a two-dimensional plane, any straight line can be represented by the equation:

in the $xy$-coordinate system. A result from the study of coordinate geometry says that for any point $(x_0,y_0)$, its distance to the line $ax+by+c=0$ is:

Consider the points (0,0), (1,2), and (2,1) in the $xy$-plane, in which the first point and the latter two points are in different classes. What is the line that best separates these two classes? This is the basis of a support vector machine classifier. The support vector is the line of maximum separation in this case.

To find such a line, we are looking for:

The objective $a^2+b^2$ is to be minimized so that the distances from each data point to the line are maximized. The condition $-1(0a+0b+c)\ge 1$ means the point (0,0) is of class $-1$; similarly for the other two points, they are of class $+1$. The straight line should put these two classes in different sides of the plane.

and set the partial differentials to zero, then solve for $a$, $b$, and $c$. It would be too lengthy to demonstrate here, but we can use SciPy to find the solution to the above numerically:

Let’s consider the points (-1,-1) and (-3,-1) to be the first class together with (0,0) and point (3,3) to be the second class together with points (1,2) and (2,1). In this problem of six points, can you modify the above program and find the line that separates the two classes? Don’t be surprised to see the solution remain the same as above. There is a reason for it. Can you tell?

This was the final lesson.

The End!
(Look How Far You Have Come)

You made it. Well done!

Take a moment and look back at how far you have come.

How did you do with the mini-course?
Did you enjoy this crash course?

Do you have any questions? Were there any sticking points?
Let me know. Leave a comment below.

Adrian Tam, PhD is a data scientist and software engineer.
View all posts by Adrian Tam →
Exploring the Python Ecosystem
Data Visualization in Python with matplotlib, Seaborn, and Bokeh