By Mehreen Saeed on March 22, 2022 in Python for Machine Learning

Data visualization is an important aspect of all AI and machine learning applications. You can gain key insights into your data through different graphical representations. In this tutorial, we’ll talk about a few options for data visualization in Python. We’ll use the MNIST dataset and the Tensorflow library for number crunching and data manipulation. To illustrate various methods for creating different types of graphs, we’ll use Python’s graphing libraries, namely matplotlib, Seaborn, and Bokeh. 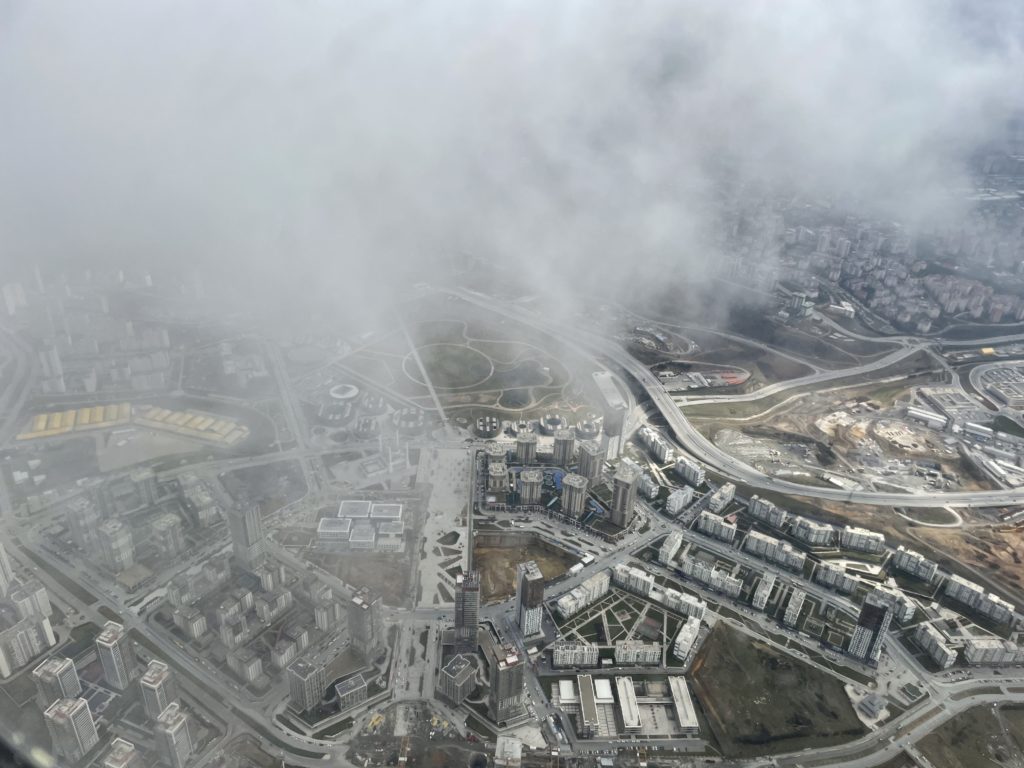 Data Visualization in Python With matplotlib, Seaborn, and Bokeh
Photo by Mehreen Saeed, some rights reserved.

This tutorial is divided into seven parts; they are:

In this post, we will use matplotlib, Seaborn, and Bokeh. They are all external libraries that need to be installed. To install them using pip, run the following command:

The code afterward will assume the following imports are executed:

We load the MNIST dataset from the keras.datasets library. To keep things simple, we’ll retain only the subset of data containing the first three digits. We’ll also ignore the test set for now.

Seaborn is indeed an add-on to matplotlib. Therefore, you need to understand how matplotlib handles plots even if using Seaborn.

Matplotlib calls its canvas the figure. You can divide the figure into several sections called subplots, so you can put two visualizations side-by-side.

Here we can see a few properties of matplotlib. There is a default figure and default axes in matplotlib. There are a number of functions defined in matplotlib under the pyplot submodule for plotting on the default axes. If we want to plot on a particular axis, we can use the plotting function under the axes objects. The operations to manipulate a figure are procedural. Meaning, there is a data structure remembered internally by matplotlib, and our operations will mutate it. The show() function simply displays the result of a series of operations. Because of that, we can gradually fine-tune a lot of details in the figure. In the example above, we hid the “ticks” (i.e., the markers on the axes) by setting xticks and yticks to empty lists.

Scatter Plots in matplotlib and Seaborn

One common visualization we use in machine learning projects is the scatter plot.

The eigenvalues printed are as follows:

The array x_pca is in the shape 18623 x 784. Let’s consider the last two columns as the x- and y-coordinates and make the point of each row in the plot. We can further color the point according to which digit it corresponds to.

The following code generates a scatter plot using matplotlib. The plot is created using the axes object’s scatter() function, which takes the x- and y-coordinates as the first two arguments. The c argument to the scatter() method specifies a value that will become its color. The s argument specifies its size. The code also creates a legend and adds a title to the plot. 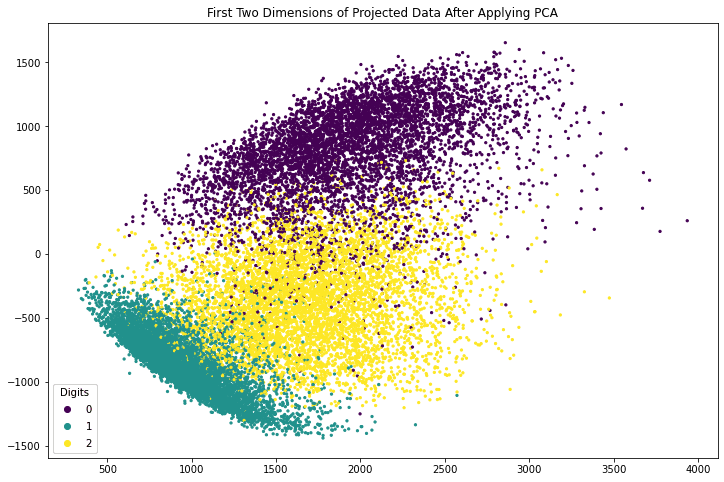 Putting the above altogether, the following is the complete code to generate the 2D scatter plot using matplotlib:

Matplotlib also allows a 3D scatter plot to be produced. To do so, you need to create an axes object with 3D projection first. Then the 3D scatter plot is created with the scatter3D() function, with the x-, y-, and z-coordinates as the first three arguments. The code below uses the data projected along the eigenvectors corresponding to the three largest eigenvalues. Instead of creating a legend, this code creates a color bar: 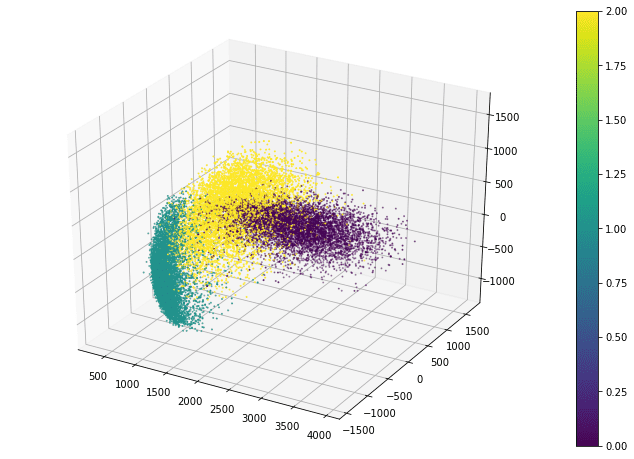 The scatter3D() function just puts the points onto the 3D space. Afterward, we can still modify how the figure displays, such as the label of each axis and the background color. But in 3D plots, one common tweak is the viewport, namely, the angle we look at the 3D space. The viewport is controlled by the view_init() function in the axes object:

Putting everything together, the following is the complete code to create the 3D scatter plot in matplotlib:

Creating scatter plots in Seaborn is similarly easy. The scatterplot() method automatically creates a legend and uses different symbols for different classes when plotting the points. By default, the plot is created on the “current axes” from matplotlib, unless the axes object is specified by the ax argument. 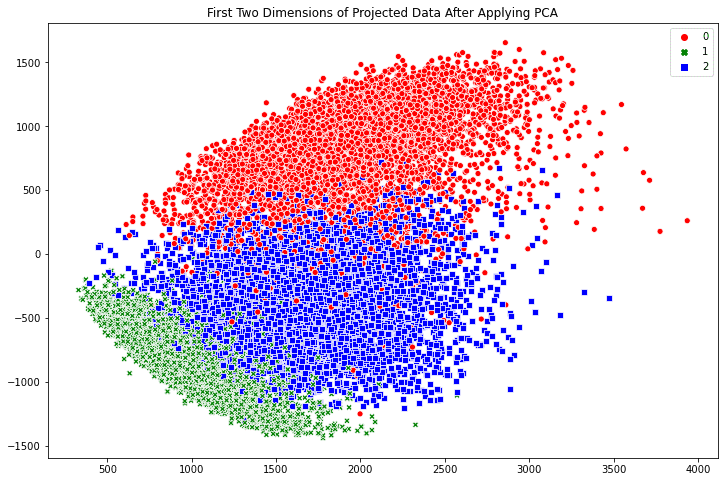 The benefit of Seaborn over matplotlib is twofold: First, we have a polished default style. For example, if we compare the point style in the two scatter plots above, the Seaborn one has a border around the dot to prevent the many points from being smudged together. Indeed, if we run the following line before calling any matplotlib functions:

We can still use the matplotlib functions but get a better looking figure by using Seaborn’s style. Secondly, it is more convenient to use Seaborn if we are using a pandas DataFrame to hold our data. As an example, let’s convert our MNIST data from a tensor into a pandas DataFrame:

Then, we can reproduce the Seaborn’s scatter plot with the following:

We do not pass in arrays as coordinates to the scatterplot() function but use column names for the data argument instead.

The following is the complete code to generate a scatter plot using Seaborn with the data stored in pandas:

The plots created by matplotlib and Seaborn are static images. If you need to zoom in, pan, or toggle the display of some part of the plot, you should use Bokeh instead.

Creating scatter plots in Bokeh is also easy. The following code generates a scatter plot and adds a legend. The show() method from the Bokeh library opens a new browser window to display the image. You can interact with the plot by scaling, zooming, scrolling, and more using options that are shown in the toolbar next to the rendered plot. You can also hide part of the scatter by clicking on the legend.

Bokeh will produce the plot in HTML with Javascript. All your actions to control the plot are handled by some Javascript functions. Its output will look like the following: 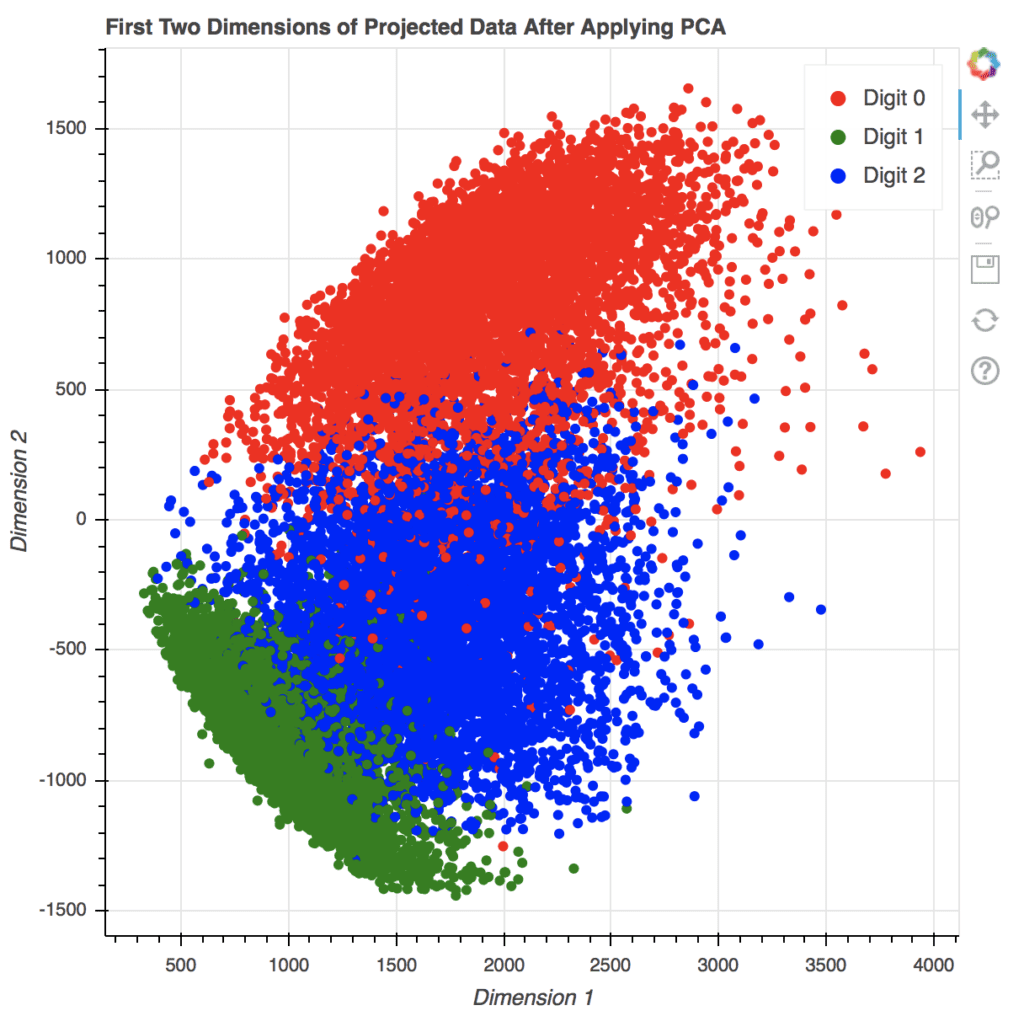 2D scatter plot generated using Bokeh in a new browser window. Note the various options on the right for interacting with the plot.

The following is the complete code to generate the above scatter plot using Bokeh:

Also, note that we create the scatter plot of the three digits in a loop, one digit at a time. This is required to make the legend interactive since each time scatter() is called, a new object is created. If we create all scatter points at once, like the following, clicking on the legend will hide and show everything instead of only the points of one of the digits.

Before we move on to show how we can visualize line plot data, let’s generate some data for illustration. Below is a simple classifier using the Keras library, which we train to learn the handwritten digit classification. The history object returned by the fit() method is a dictionary that contains all the learning history of the training stage. For simplicity, we’ll train the model using only 10 epochs.

The code above will produce a dictionary with keys loss, accuracy, val_loss, and val_accuracy, as follows:

Let’s look at various options for visualizing the learning history obtained from training our classifier.

Creating a multi-line plot in matplotlib is as trivial as the following. We obtain the list of values of the training and validation accuracies from the history, and by default, matplotlib will consider that as sequential data (i.e., x-coordinates are integers counting from 0 onward). 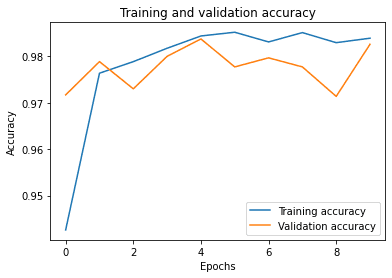 The complete code for creating the multi-line plot is as follows:

Similarly, we can do the same in Seaborn. As we have seen in the case of scatter plots, we can pass in the data to Seaborn as a series of values explicitly or through a pandas DataFrame. Let’s plot the training loss and validation loss in the following using a pandas DataFrame:

It will print the following table, which is the DataFrame we created from the history:

And the plot it generated is as follows: 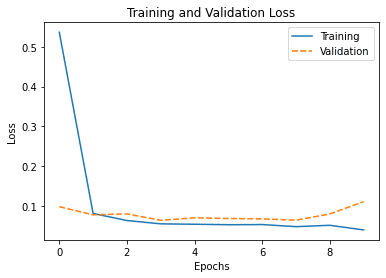 By default, Seaborn will understand the column labels from the DataFrame and use them as a legend. In the above, we provide a new label for each plot. Moreover, the x-axis of the line plot is taken from the index of the DataFrame by default, which is an integer running from 0 to 9 in our case, as we can see above.

The complete code of producing the plot in Seaborn is as follows:

As you can expect, we can also provide arguments x and y together with data to our call to lineplot() as in our example of the Seaborn scatter plot above if we want to control the x- and y-coordinates precisely.

Bokeh can also generate multi-line plots, as illustrated in the code below. As we saw in the scatter plot example, we need to provide the x- and y-coordinates explicitly and do one line at a time. Again, the show() method opens a new browser window to display the plot, and you can interact with it. 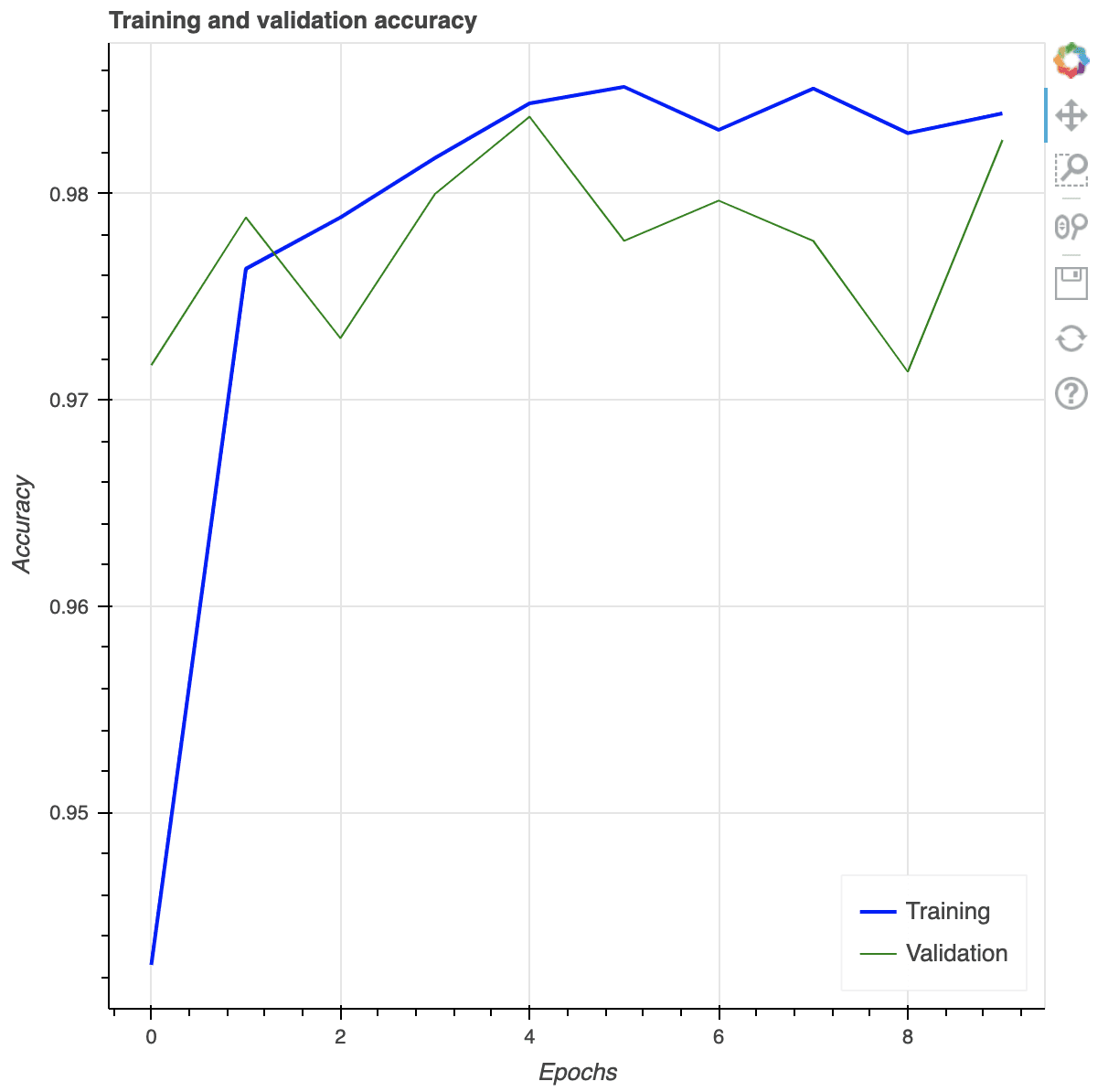 Multi-line plot using Bokeh. Note the options for user interaction shown on the toolbar on the right.

The complete code for making the Bokeh plot is as follows:

Each of the tools we introduced above has a lot more functions for us to control the bits and pieces of the details in the visualization. It is important to search their respective documentation to find how you can polish your plots. It is equally important to check out the example code in their documentation to learn how you can possibly make your visualization better.

Without providing too much detail, here are some ideas that you may want to add to your visualization:

Before we conclude this post, the following is an example to create a side-by-side visualization in matplotlib, where one of them is created using Seaborn:

The equivalent in Bokeh is to create each subplot separately and then specify the layout when we show it:

In this tutorial, you discovered various options for data visualization in Python.

Do you have any questions about the data visualization options discussed in this post? Ask your questions in the comments below, and I will do my best to answer.

4 Responses to Data Visualization in Python with matplotlib, Seaborn, and Bokeh