Gradient descent procedure is a method that holds paramount importance in machine learning. It is often used for minimizing error functions in classification and regression problems. It is also used in training neural networks, and deep learning architectures.

In this tutorial, you will discover the gradient descent procedure. 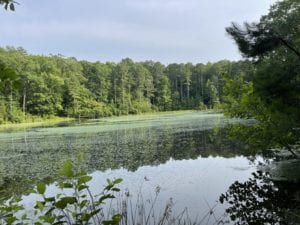 A Gentle Introduction to gradient descent. Photo by Mehreen Saeed, some rights reserved.

For this tutorial the prerequisite knowledge of the following topics is assumed:

You can review these concepts by clicking on the link given above.

The gradient descent procedure is an algorithm for finding the minimum of a function.

We have the following variables:

The steps for the gradient descent algorithm are given below. This is also called the training method.

It is as simple as that!

The learning rate 𝜂 is a user defined variable for the gradient descent procedure. Its value lies in the range [0,1].

Let’s find the minimum of the following function of two variables, whose graphs and contours are shown in the figure below:

The general form of the gradient vector is given by:

Two iterations of the algorithm, T=2 and 𝜂=0.1 are shown below

If you keep running the above iterations, the procedure will eventually end up at the point where the function is minimum, i.e., (0,0).

At iteration t=1, the algorithm is illustrated in the figure below: 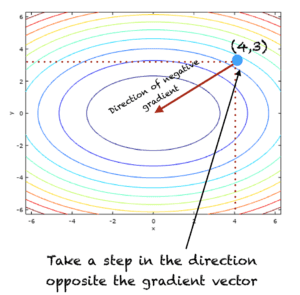 How Many Iterations to Run?

Normally gradient descent is run till the value of x does not change or the change in x is below a certain threshold. The stopping criterion can also be a user defined maximum number of iterations (that we defined earlier as T).

Gradient descent can run into problems such as:

To take care of the above problems, a momentum term can be added to the update equation of gradient descent algorithm as:

Why Is The Gradient Descent Important In Machine Learning?

Gradient ascent is used similarly, for problems that involve maximizing a function.

In this tutorial, you discovered the algorithm for gradient descent. Specifically, you learned:

5 Responses to A Gentle Introduction To Gradient Descent Procedure