By Jason Brownlee on August 21, 2020 in Statistics

The solution is to use a statistical hypothesis test to evaluate whether the difference in the mean performance between any two algorithms is real or not.

In this tutorial, you will discover how to use statistical hypothesis tests for comparing machine learning algorithms. 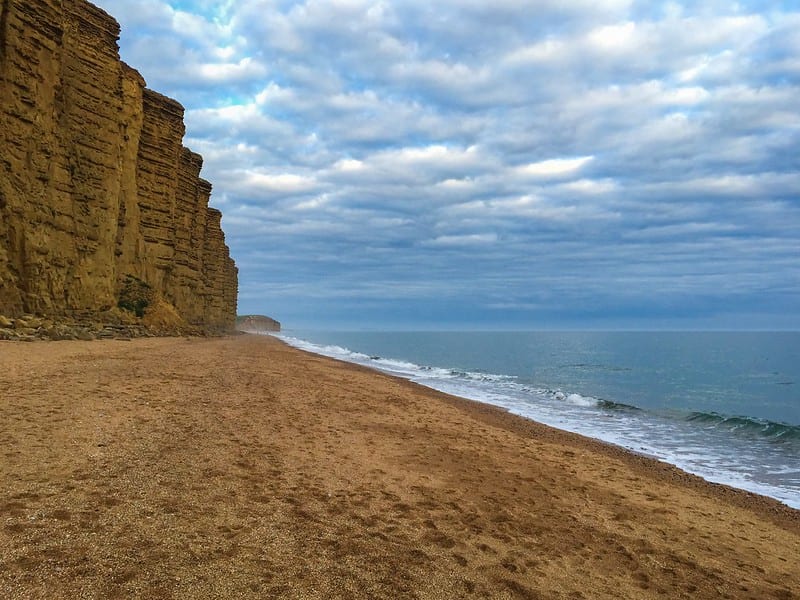 Model selection involves evaluating a suite of different machine learning algorithms or modeling pipelines and comparing them based on their performance.

The model or modeling pipeline that achieves the best performance according to your performance metric is then selected as your final model that you can then use to start making predictions on new data.

The problem is, how do you know the difference between two models is real and not just a statistical fluke?

This problem can be addressed using a statistical hypothesis test.

One approach is to evaluate each model on the same k-fold cross-validation split of the data (e.g. using the same random number seed to split the data in each case) and calculate a score for each split. This would give a sample of 10 scores for 10-fold cross-validation. The scores can then be compared using a paired statistical hypothesis test because the same treatment (rows of data) was used for each algorithm to come up with each score. The Paired Student’s t-Test could be used.

A problem with using the Paired Student’s t-Test, in this case, is that each evaluation of the model is not independent. This is because the same rows of data are used to train the data multiple times — actually, each time, except for the time a row of data is used in the hold-out test fold. This lack of independence in the evaluation means that the Paired Student’s t-Test is optimistically biased.

This statistical test can be adjusted to take the lack of independence into account. Additionally, the number of folds and repeats of the procedure can be configured to achieve a good sampling of model performance that generalizes well to a wide range of problems and algorithms. Specifically two-fold cross-validation with five repeats, so-called 5×2-fold cross-validation.

This approach was proposed by Thomas Dietterich in his 1998 paper titled “Approximate Statistical Tests for Comparing Supervised Classification Learning Algorithms.”

For more on this topic, see the tutorial:

Thankfully, we don’t need to implement this procedure ourselves.

The MLxtend library by Sebastian Raschka provides an implementation via the paired_ttest_5x2cv() function.

First, you must install the mlxtend library, for example:

To use the evaluation, you must first load your dataset, then define the two models that you wish to compare.

You can then call the paired_ttest_5x2cv() function and pass in your data and models and it will report the t-statistic value and the p-value as to whether the difference in the performance of the two algorithms is significant or not.

The p-value must be interpreted using an alpha value, which is the significance level that you are willing to accept.

The smaller the alpha value, the better, and a common value is 5 percent (0.05).

Now that we are familiar with the way to use a hypothesis test to compare algorithms, let’s look at some examples.

In this section, let’s compare the performance of two machine learning algorithms on a binary classification task, then check if the observed difference is statistically significant or not.

First, we can use the make_classification() function to create a synthetic dataset with 1,000 samples and 20 input variables.

The example below creates the dataset and summarizes its shape.

Running the example creates the dataset and summarizes the number of rows and columns, confirming our expectations.

We can use this data as the basis for comparing two algorithms.

We will compare the performance of two linear algorithms on this dataset. Specifically, a logistic regression algorithm and a linear discriminant analysis (LDA) algorithm.

The procedure I like is to use repeated stratified k-fold cross-validation with 10 folds and three repeats. We will use this procedure to evaluate each algorithm and return and report the mean classification accuracy.

Running the example first reports the mean classification accuracy for each algorithm.

In this case, the results suggest that LDA has better performance if we just look at the mean scores: 89.2 percent for logistic regression and 89.3 percent for LDA.

A box and whisker plot is also created summarizing the distribution of accuracy scores.

This plot would support my decision in choosing LDA over LR. 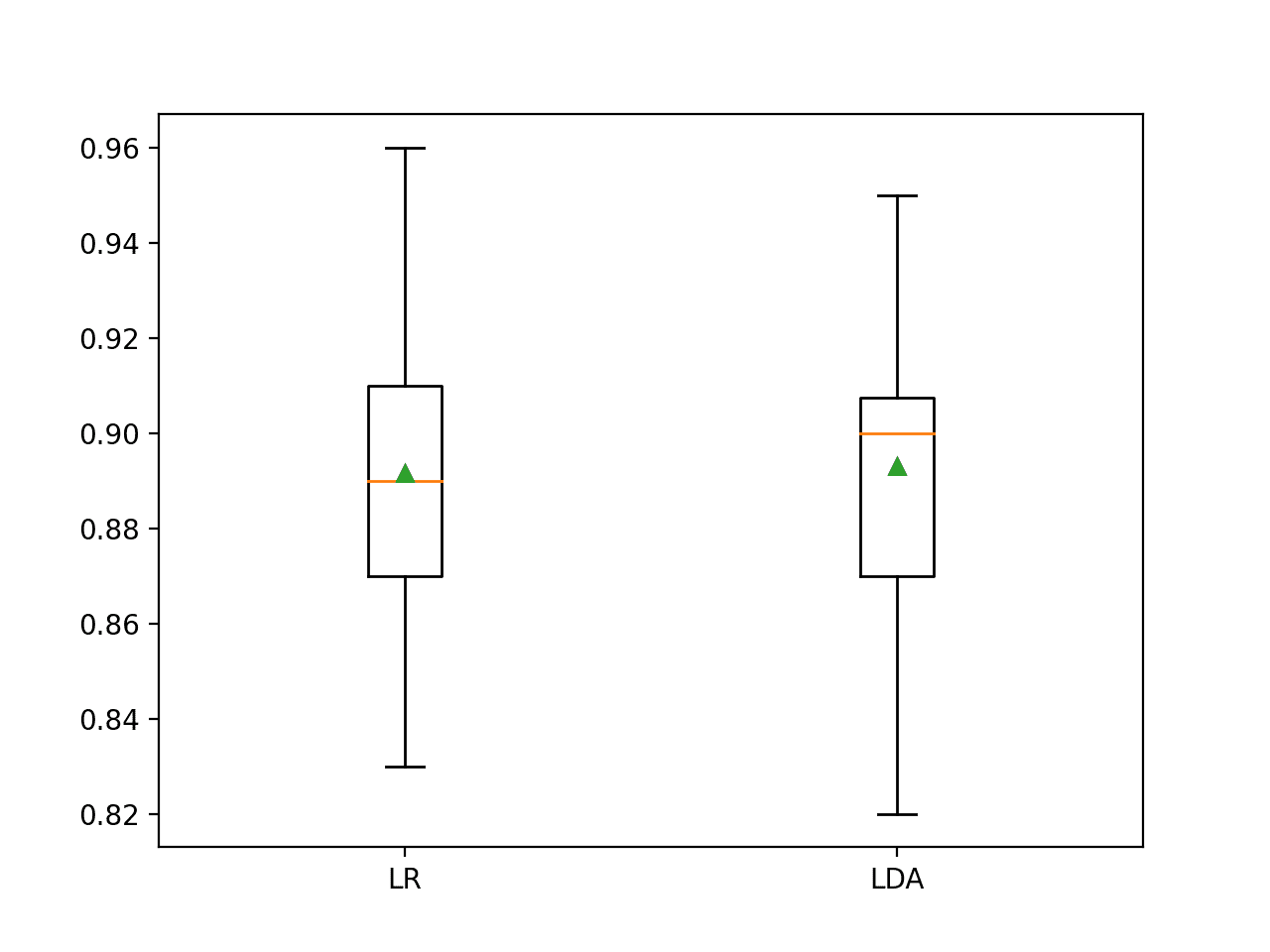 Now we can use a hypothesis test to see if the observed results are statistically significant.

First, we will use the 5×2 procedure to evaluate the algorithms and calculate a p-value and test statistic value.

We can then interpret the p-value using an alpha of 5 percent.

Running the example, we first evaluate the algorithms before, then report on the result of the statistical hypothesis test.

In this case, we can see that the p-value is about 0.3, which is much larger than 0.05. This leads us to fail to reject the null hypothesis, suggesting that any observed difference between the algorithms is probably not real.

We could just as easily choose logistic regression or LDA and both would perform about the same on average.

This highlights that performing model selection based only on the mean performance may not be sufficient.

Recall that we are reporting performance using a different procedure (3×10 CV) than the procedure used to estimate the performance in the statistical test (5×2 CV). Perhaps results would be different if we looked at scores using five repeats of two-fold cross-validation?

The example below is updated to report classification accuracy for each algorithm using 5×2 CV.

Running the example reports the mean accuracy for both algorithms and the results of the statistical test.

In this case, we can see that the difference in the mean performance for the two algorithms is even larger, 89.4 percent vs. 89.0 percent in favor of logistic regression instead of LDA as we saw with 3×10 CV.

In this tutorial, you discovered how to use statistical hypothesis tests for comparing machine learning algorithms.

Jason Brownlee, PhD is a machine learning specialist who teaches developers how to get results with modern machine learning methods via hands-on tutorials.
View all posts by Jason Brownlee →
How to Calculate the Bias-Variance Trade-off with Python
How to Set Axis for Rows and Columns in NumPy