By Jason Brownlee on November 26, 2014 in Machine Learning Process

The most commonly reported measure of classifier performance is accuracy: the percent of correct classifications obtained.

What Is Meant By Classifier Performance?

Classifier performance is more than just a count of correct classifications.

Consider, for interest, the problem of screening for a relatively rare condition such as cervical cancer, which has a prevalence of about 10% (actual stats). If a lazy Pap smear screener was to classify every slide they see as “normal”, they would have a 90% accuracy. Very impressive! But that figure completely ignores the fact that the 10% of women who do have the disease have not been diagnosed at all.

In a previous blog post we discussed some of the other performance metrics which can be applied to the assessment of a classifier. To review:

Most classifiers produce a score, which is then thresholded to decide the classification. If a classifier produces a score between 0.0 (definitely negative) and 1.0 (definitely positive), it is common to consider anything over 0.5 as positive. 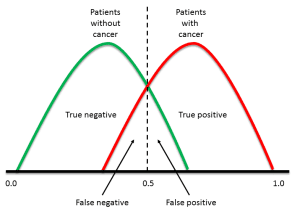 Once you have numbers for all of these measures, some useful metrics can be calculated.

Let’s calculate these metrics for some reasonable real-world numbers. If we have 100,000 patients, of which 200 (20%) actually have cancer, we might see the following test results (Table 1):

In other words, our test will correctly identify 80% of people with the disease, but 30% of healthy people will incorrectly test positive. By only considering the sensitivity (or accuracy) of the test, potentially important information is lost.

By considering our wrong results as well as our correct ones we get much greater insight into the performance of the classifier.

One way to overcome the problem of having to choose a cutoff is to start with a threshold of 0.0, so that every case is considered as positive. We correctly classify all of the positive cases, and incorrectly classify all of the negative cases. We then move the threshold over every value between 0.0 and 1.0, progressively decreasing the number of false positives and increasing the number of true positives.

TP (sensitivity) can then be plotted against FP (1 – specificity) for each threshold used. The resulting graph is called a Receiver Operating Characteristic (ROC) curve (Figure 2). ROC curves were developed for use in signal detection in radar returns in the 1950’s, and have since been applied to a wide range of problems. 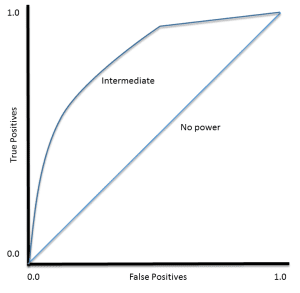 For a perfect classifier the ROC curve will go straight up the Y axis and then along the X axis. A classifier with no power will sit on the diagonal, whilst most classifiers fall somewhere in between.

It is immediately apparent that a ROC curve can be used to select a threshold for a classifier which maximises the true positives, while minimising the false positives.

However, different types of problems have different optimal classifier thresholds. For a cancer screening test, for example, we may be prepared to put up with a relatively high false positive rate in order to get a high true positive,  it is most important to identify possible cancer sufferers.

For a follow-up test after treatment, however, a different threshold might be more desirable, since we want to minimise false negatives, we don’t want to tell a patient they’re clear if this is not actually the case.

ROC curves also give us the ability to assess the performance of the classifier over its entire operating range. The most widely-used measure is the area under the curve (AUC). As you can see from Figure 2, the AUC for a classifier with no power, essentially random guessing, is 0.5, because the curve follows the diagonal. The AUC for that mythical being, the perfect classifier, is 1.0. Most classifiers have AUCs that fall somewhere between these two values.

An AUC of less than 0.5 might indicate that something interesting is happening. A very low AUC might indicate that the problem has been set up wrongly, the classifier is finding a relationship in the data which is, essentially, the opposite of that expected. In such a case, inspection of the entire ROC curve might give some clues as to what is going on: have the positives and negatives been mislabelled?

The AUC can be used to compare the performance of two or more classifiers. A single threshold can be selected and the classifiers’ performance at that point compared, or the overall performance can be compared by considering the AUC.

Most published reports compare AUCs in absolute terms: “Classifier 1 has an AUC of 0.85, and classifier 2 has an AUC of 0.79, so classifier 1 is clearly better“. It is, however, possible to calculate whether differences in AUC are statistically significant. For full details, see the Hanley & McNeil (1982) paper listed below.

When To Use ROC Curve Analysis

In this post I have used a biomedical example, and ROC curves are widely used in the biomedical sciences. The technique is, however, applicable to any classifier producing a score for each case, rather than a binary decision.

Neural networks and many statistical algorithms are examples of appropriate classifiers, while approaches such as decision trees are less suited. Algorithms which have only two possible outcomes (such as the cancer / no cancer example used here) are most suited to this approach.

Any sort of data which can be fed into appropriate classifiers can be subjected to ROC curve analysis.

Jason Brownlee, PhD is a machine learning specialist who teaches developers how to get results with modern machine learning methods via hands-on tutorials.
View all posts by Jason Brownlee →
Evaluate Yourself As a Data Scientist
Get Your Dream Job in Machine Learning by Delivering Results

17 Responses to Assessing and Comparing Classifier Performance with ROC Curves