The statistical power of a hypothesis test is the probability of detecting an effect, if there is a true effect present to detect.

Power can be calculated and reported for a completed experiment to comment on the confidence one might have in the conclusions drawn from the results of the study. It can also be used as a tool to estimate the number of observations or sample size required in order to detect an effect in an experiment.

In this tutorial, you will discover the importance of the statistical power of a hypothesis test and now to calculate power analyses and power curves as part of experimental design. 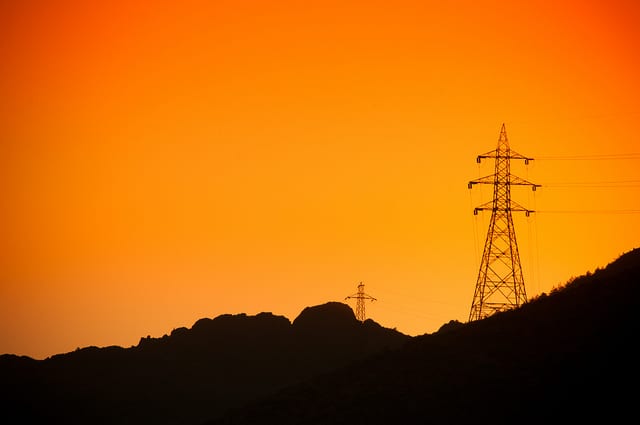 A Gentle Introduction to Statistical Power and Power Analysis in Python
Photo by Kamil Porembiński, some rights reserved.

A statistical hypothesis test makes an assumption about the outcome, called the null hypothesis.

The test is often interpreted using a p-value, which is the probability of observing the result given that the null hypothesis is true, not the reverse, as is often the case with misinterpretations.

We can see that the p-value is just a probability and that in actuality the result may be different. The test could be wrong. Given the p-value, we could make an error in our interpretation.

There are two types of errors; they are:

What Is Statistical Power?

Statistical power, or the power of a hypothesis test is the probability that the test correctly rejects the null hypothesis.

That is, the probability of a true positive result. It is only useful when the null hypothesis is rejected.

— Page 60, The Essential Guide to Effect Sizes: Statistical Power, Meta-Analysis, and the Interpretation of Research Results, 2010.

Statistical power is one piece in a puzzle that has four related parts; they are:

All four variables are related. For example, a larger sample size can make an effect easier to detect, and the statistical power can be increased in a test by increasing the significance level.

A power analysis involves estimating one of these four parameters given values for three other parameters. This is a powerful tool in both the design and in the analysis of experiments that we wish to interpret using statistical hypothesis tests.

Power analysis answers questions like “how much statistical power does my study have?” and “how big a sample size do I need?”.

— Page 56, The Essential Guide to Effect Sizes: Statistical Power, Meta-Analysis, and the Interpretation of Research Results, 2010.

Perhaps the most common use of a power analysis is in the estimation of the minimum sample size required for an experiment.

— Page 57, The Essential Guide to Effect Sizes: Statistical Power, Meta-Analysis, and the Interpretation of Research Results, 2010.

As a practitioner, we can start with sensible defaults for some parameters, such as a significance level of 0.05 and a power level of 0.80. We can then estimate a desirable minimum effect size, specific to the experiment being performed. A power analysis can then be used to estimate the minimum sample size required.

In addition, multiple power analyses can be performed to provide a curve of one parameter against another, such as the change in the size of an effect in an experiment given changes to the sample size. More elaborate plots can be created varying three of the parameters. This is a useful tool for experimental design.

We can make the idea of statistical power and power analysis concrete with a worked example.

In this section, we will look at the Student’s t test, which is a statistical hypothesis test for comparing the means from two samples of Gaussian variables. The assumption, or null hypothesis, of the test is that the sample populations have the same mean, e.g. that there is no difference between the samples or that the samples are drawn from the same underlying population.

The size of the effect of comparing two groups can be quantified with an effect size measure. A common measure for comparing the difference in the mean from two groups is the Cohen’s d measure. It calculates a standard score that describes the difference in terms of the number of standard deviations that the means are different. A large effect size for Cohen’s d is 0.80 or higher, as is commonly accepted when using the measure.

We can use the default and assume a minimum statistical power of 80% or 0.8.

For a given experiment with these defaults, we may be interested in estimating a suitable sample size. That is, how many observations are required from each sample in order to at least detect an effect of 0.80 with an 80% chance of detecting the effect if it is true (20% of a Type II error) and a 5% chance of detecting an effect if there is no such effect (Type I error).

We can solve this using a power analysis.

The function solve_power() can be used to calculate one of the four parameters in a power analysis. In our case, we are interested in calculating the sample size. We can use the function by providing the three pieces of information we know (alpha, effect, and power) and setting the size of argument we wish to calculate the answer of (nobs1) to “None“. This tells the function what to calculate.

The TTestIndPower instance must be created, then we can call the solve_power() with our arguments to estimate the sample size for the experiment.

We can go one step further and calculate power curves.

Power curves are line plots that show how the change in variables, such as effect size and sample size, impact the power of the statistical test.

The plot_power() function can be used to create power curves. The dependent variable (x-axis) must be specified by name in the ‘dep_var‘ argument. Arrays of values can then be specified for the sample size (nobs), effect size (effect_size), and significance (alpha) parameters. One or multiple curves will then be plotted showing the impact on statistical power.

For example, we can assume a significance of 0.05 (the default for the function) and explore the change in sample size between 5 and 100 with low, medium, and high effect sizes.

Running the example creates the plot showing the impact on statistical power (y-axis) for three different effect sizes (es) as the sample size (x-axis) is increased.

We can see that if we are interested in a large effect that a point of diminishing returns in terms of statistical power occurs at around 40-to-50 observations. 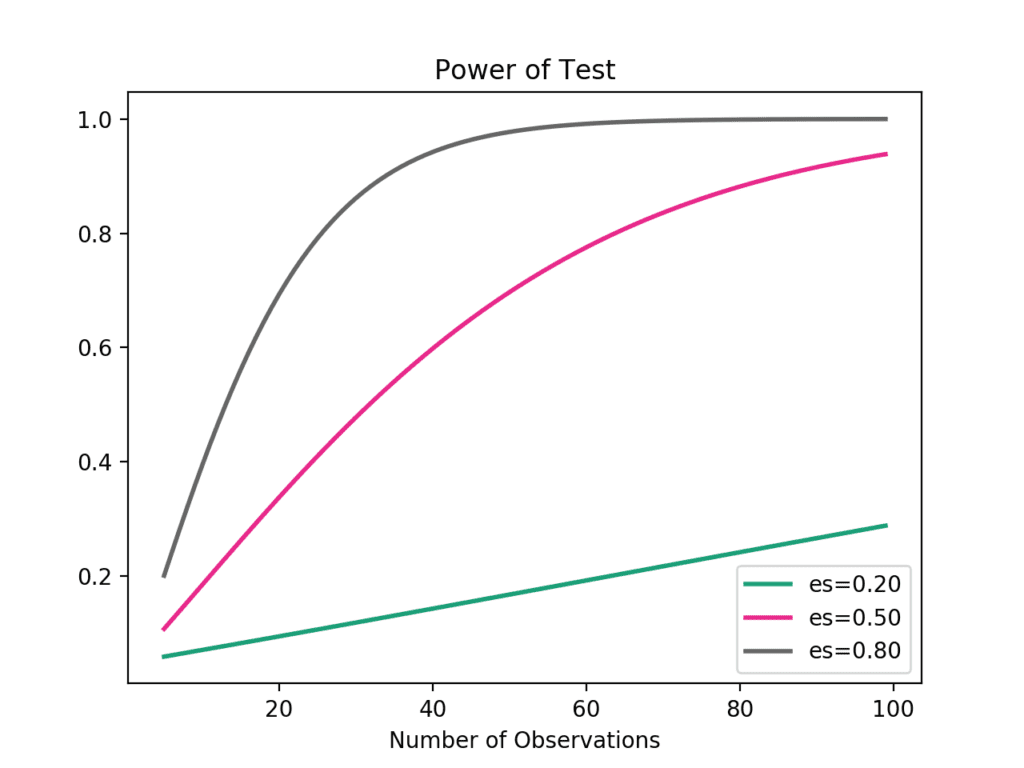 Usefully, statsmodels has classes to perform a power analysis with other statistical tests, such as the F-test, Z-test, and the Chi-Squared test.

In this tutorial, you discovered the statistical power of a hypothesis test and how to calculate power analyses and power curves as part of experimental design.