By Jason Brownlee on June 3, 2020 in Data Preparation

Datasets may have missing values, and this can cause problems for many machine learning algorithms.

As such, it is good practice to identify and replace missing values for each column in your input data prior to modeling your prediction task. This is called missing data imputation, or imputing for short.

A sophisticated approach involves defining a model to predict each missing feature as a function of all other features and to repeat this process of estimating feature values multiple times. The repetition allows the refined estimated values for other features to be used as input in subsequent iterations of predicting missing values. This is generally referred to as iterative imputation.

In this tutorial, you will discover how to use iterative imputation strategies for missing data in machine learning. 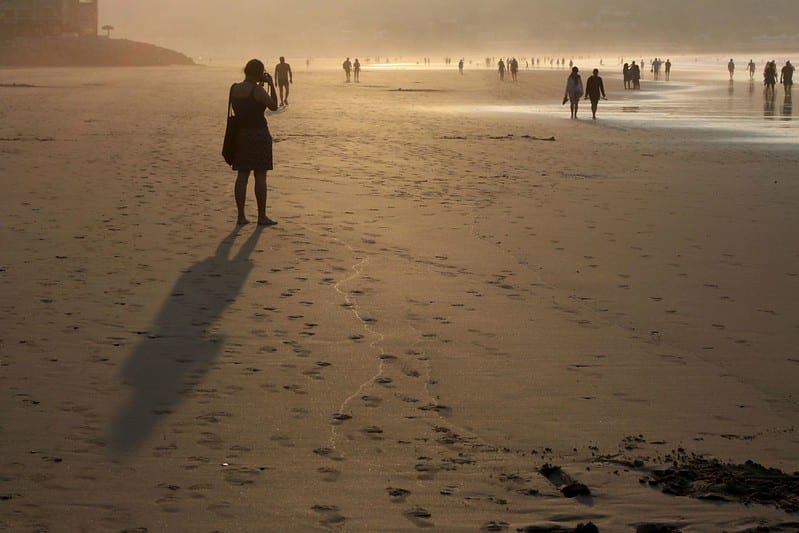 A dataset may have missing values.

These are rows of data where one or more values or columns in that row are not present. The values may be missing completely or they may be marked with a special character or value, such as a question mark “?”.

Values could be missing for many reasons, often specific to the problem domain, and might include reasons such as corrupt measurements or unavailability.

As such, it is common to identify missing values in a dataset and replace them with a numeric value. This is called data imputing, or missing data imputation.

One approach to imputing missing values is to use an iterative imputation model.

Iterative imputation refers to a process where each feature is modeled as a function of the other features, e.g. a regression problem where missing values are predicted. Each feature is imputed sequentially, one after the other, allowing prior imputed values to be used as part of a model in predicting subsequent features.

It is iterative because this process is repeated multiple times, allowing ever improved estimates of missing values to be calculated as missing values across all features are estimated.

This approach may be generally referred to as fully conditional specification (FCS) or multivariate imputation by chained equations (MICE).

This methodology is attractive if the multivariate distribution is a reasonable description of the data. FCS specifies the multivariate imputation model on a variable-by-variable basis by a set of conditional densities, one for each incomplete variable. Starting from an initial imputation, FCS draws imputations by iterating over the conditional densities. A low number of iterations (say 10–20) is often sufficient.

Now that we are familiar with iterative methods for missing value imputation, let’s take a look at a dataset with missing values.

The horse colic dataset describes medical characteristics of horses with colic and whether they lived or died.

There are 300 rows and 26 input variables with one output variable. It is a binary classification prediction task that involves predicting 1 if the horse lived and 2 if the horse died.

There are many fields we could select to predict in this dataset. In this case, we will predict whether the problem was surgical or not (column index 23), making it a binary classification problem.

The dataset has many missing values for many of the columns where each missing value is marked with a question mark character (“?”).

Below provides an example of rows from the dataset with marked missing values.

You can learn more about the dataset here:

Marking missing values with a NaN (not a number) value in a loaded dataset using Python is a best practice.

We can load the dataset using the read_csv() Pandas function and specify the “na_values” to load values of ‘?’ as missing, marked with a NaN value.

Once loaded, we can review the loaded data to confirm that “?” values are marked as NaN.

We can then enumerate each column and report the number of rows with missing values for the column.

Tying this together, the complete example of loading and summarizing the dataset is listed below.

Running the example first loads the dataset and summarizes the first five rows.

We can see that the missing values that were marked with a “?” character have been replaced with NaN values.

Next, we can see the list of all columns in the dataset and the number and percentage of missing values.

Now that we are familiar with the horse colic dataset that has missing values, let’s look at how we can use iterative imputation.

In this section, we will explore how to effectively use the IterativeImputer class.

It is a data transform that is first configured based on the method used to estimate the missing values. By default, a BayesianRidge model is employed that uses a function of all other input features. Features are filled in ascending order, from those with the fewest missing values to those with the most.

Then the imputer is fit on a dataset.

The fit imputer is then applied to a dataset to create a copy of the dataset with all missing values for each column replaced with an estimated value.

The IterativeImputer class cannot be used directly because it is experimental.

If you try to use it directly, you will get an error as follows:

Instead, you must add an additional import statement to add support for the IterativeImputer class, as follows:

We can demonstrate its usage on the horse colic dataset and confirm it works by summarizing the total number of missing values in the dataset before and after the transform.

Running the example first loads the dataset and reports the total number of missing values in the dataset as 1,605.

The transform is configured, fit, and performed and the resulting new dataset has no missing values, confirming it was performed as we expected.

Each missing value was replaced with a value estimated by the model.

It is a good practice to evaluate machine learning models on a dataset using k-fold cross-validation.

To correctly apply iterative missing data imputation and avoid data leakage, it is required that the models for each column are calculated on the training dataset only, then applied to the train and test sets for each fold in the dataset.

For example, the Pipeline below uses an IterativeImputer with the default strategy, followed by a random forest model.

We can evaluate the imputed dataset and random forest modeling pipeline for the horse colic dataset with repeated 10-fold cross-validation.

Running the example correctly applies data imputation to each fold of the cross-validation procedure.

The pipeline is evaluated using three repeats of 10-fold cross-validation and reports the mean classification accuracy on the dataset as about 86.3 percent which is a good score.

How do we know that using a default iterative strategy is good or best for this dataset?

The answer is that we don’t.

This makes sense as we want to have more complete data when it comes time to estimating missing values for columns where the majority of values are missing.

Nevertheless, we can experiment with different imputation order strategies, such as descending, right-to-left (Arabic), left-to-right (Roman), and random.

The example below evaluates and compares each available imputation order configuration.

At the end of the run, a box and whisker plot is created for each set of results, allowing the distribution of results to be compared. 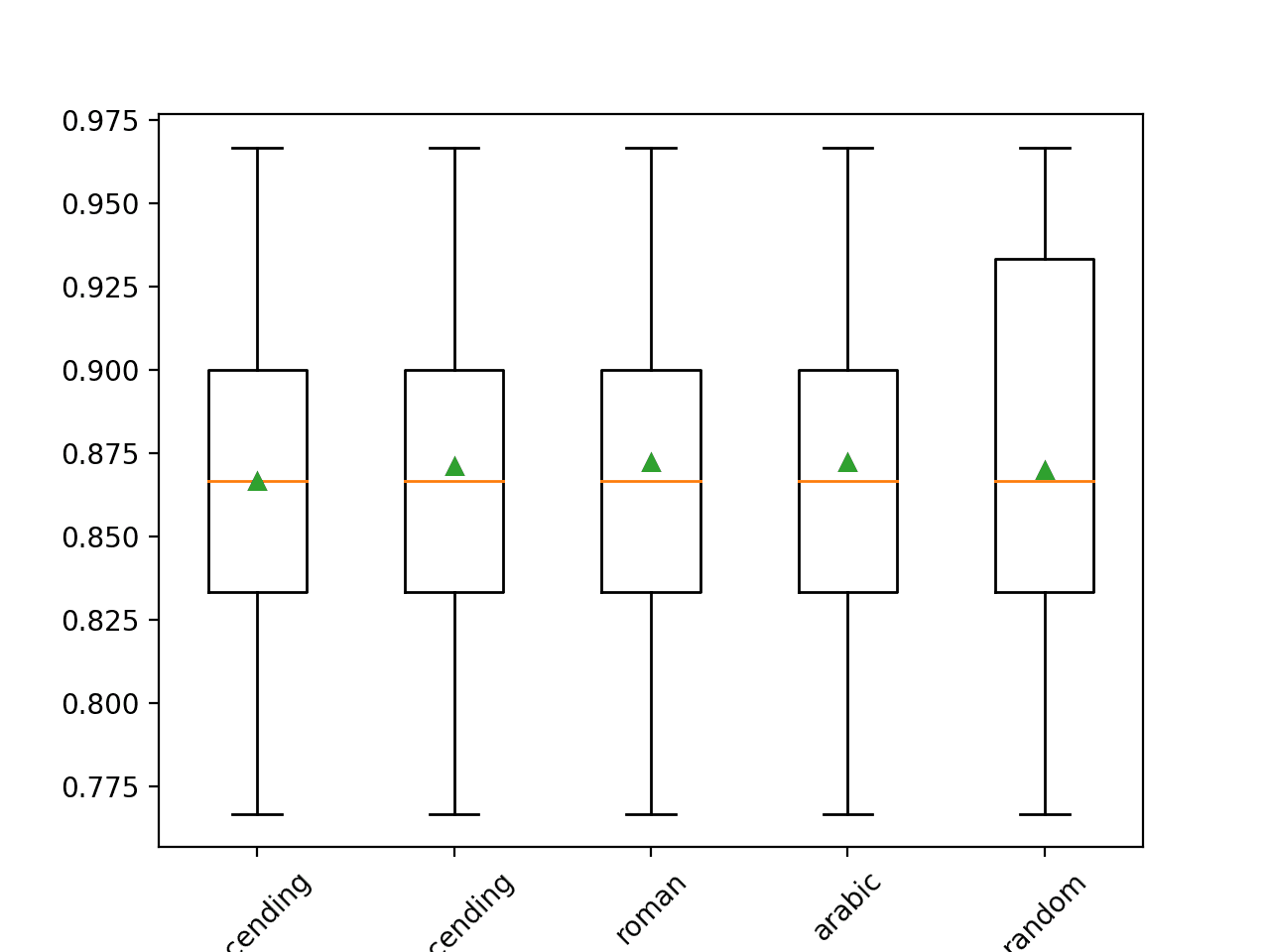 IterativeImputer and Different Number of Iterations

By default, the IterativeImputer will repeat the number of iterations 10 times.

It may be interesting to evaluate different numbers of iterations. The example below compares different values for “max_iter” from 1 to 20.

Running the example evaluates each number of iterations on the horse colic dataset using repeated cross-validation.

The results suggest that very few iterations, such as 3, might be as or more effective than 9-12 iterations on this dataset.

At the end of the run, a box and whisker plot is created for each set of results, allowing the distribution of results to be compared. 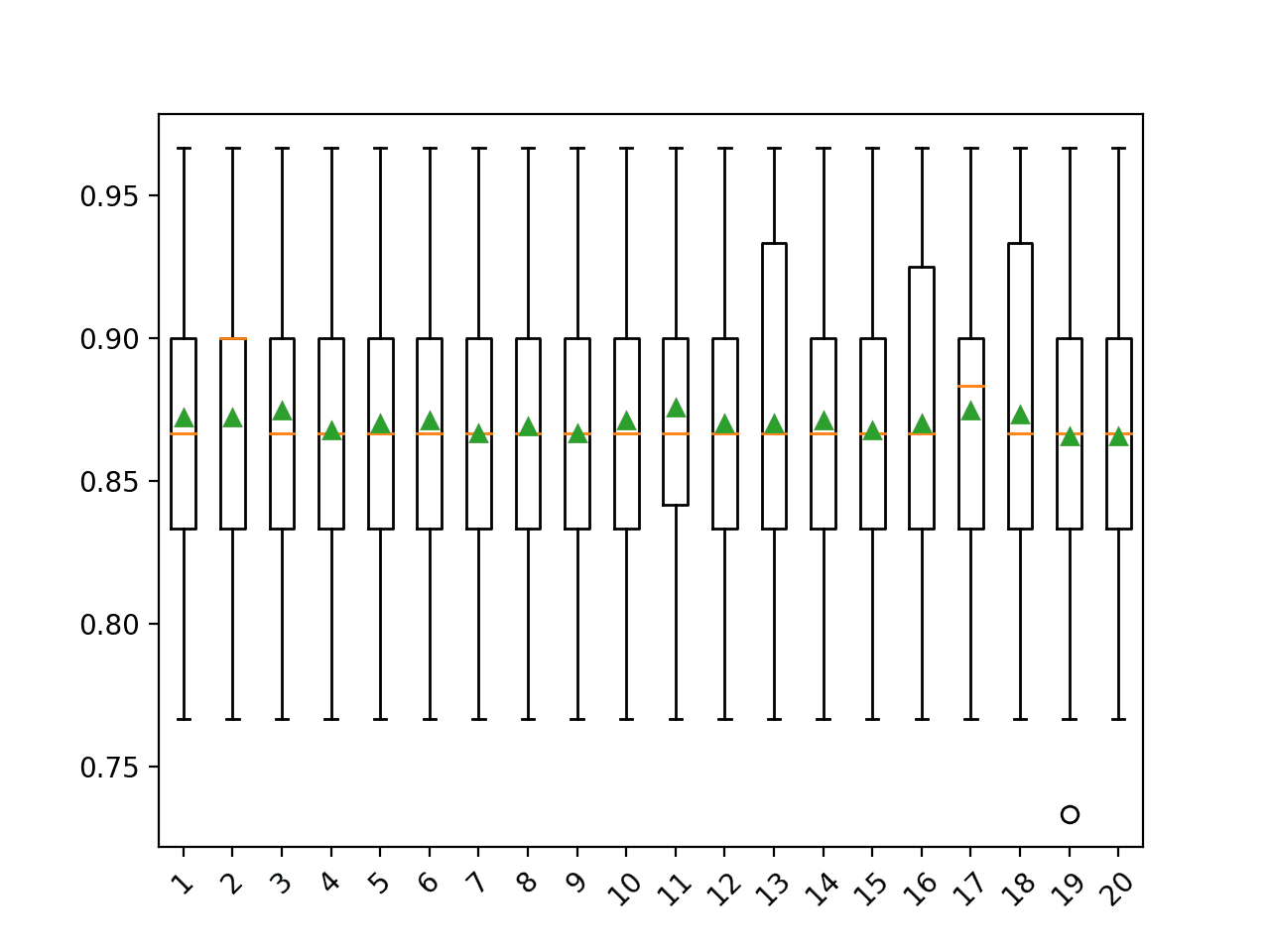 IterativeImputer Transform When Making a Prediction

We may wish to create a final modeling pipeline with the iterative imputation and random forest algorithm, then make a prediction for new data.

This can be achieved by defining the pipeline and fitting it on all available data, then calling the predict() function, passing new data in as an argument.

Importantly, the row of new data must mark any missing values using the NaN value.

Running the example fits the modeling pipeline on all available data.

A new row of data is defined with missing values marked with NaNs and a classification prediction is made.

In this tutorial, you discovered how to use iterative imputation strategies for missing data in machine learning.

Jason Brownlee, PhD is a machine learning specialist who teaches developers how to get results with modern machine learning methods via hands-on tutorials.
View all posts by Jason Brownlee →
Test-Time Augmentation For Tabular Data With Scikit-Learn
How to Perform Feature Selection With Numerical Input Data

40 Responses to Iterative Imputation for Missing Values in Machine Learning