By Jason Brownlee on December 9, 2016 in Time Series

Once loaded, Pandas also provides tools to explore and better understand your dataset.

In this post, you will discover how to load and explore your time series dataset.

In this post, we will use the Daily Female Births Dataset as an example.

This univariate time series dataset describes the number of daily female births in California in 1959. 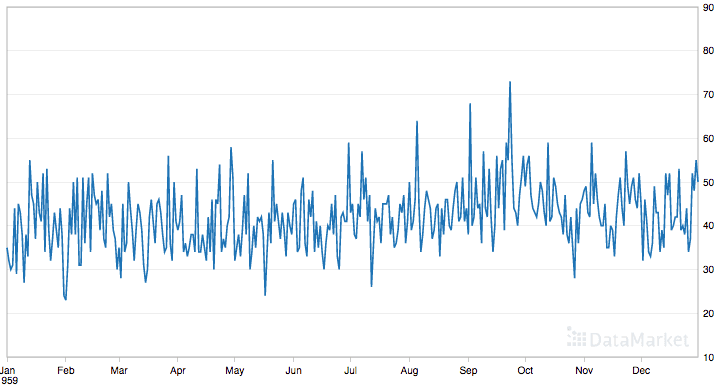 Download the dataset and place it in your current working directory with the file name “daily-total-female-births-in-cal.csv“.

A Series is a one-dimensional array with a time label for each row.

The series has a name, which is the column name of the data column.

You can see that each row has an associated date. This is in fact not a column, but instead a time index for value. As an index, there can be multiple values for one time, and values may be spaced evenly or unevenly across times.

The main function for loading CSV data in Pandas is the read_csv() function. We can use this to load the time series as a Series object, instead of a DataFrame, as follows:

Note the arguments to the read_csv() function.

We provide it a number of hints to ensure the data is loaded as a Series.

One more argument you may need to use for your own data is date_parser to specify the function to parse date-time values. In this example, the date format has been inferred, and this works in most cases. In those few cases where it does not, specify your own date parsing function and use the date_parser argument.

Running the example above prints the same output, but also confirms that the time series was indeed loaded as a Series object.

It is often easier to perform manipulations of your time series data in a DataFrame rather than a Series object.

In those situations, you can easily convert your loaded Series to a DataFrame as follows:

In this section, we’ll take a look at a few, common operations to explore and summarize your loaded time series data.

Peek at the Data

It is a good idea to take a peek at your loaded data to confirm that the types, dates, and data loaded as you intended.

You can use the head() function to peek at the first 5 records or specify the first n number of records to review.

For example, you can print the first 10 rows of data as follows.

Running the example prints the following:

You can also use the tail() function to get the last n records of the dataset.

Another quick check to perform on your data is the number of loaded observations.

This can help flush out issues with column headers not being handled as intended, and to get an idea on how to effectively divide up data later for use with supervised learning algorithms.

You can get the dimensionality of your Series using the size parameter.

Running this example we can see that as we would expect, there are 365 observations, one for each day of the year in 1959.

You can slice, dice, and query your series using the time index.

For example, you can access all observations in January as follows:

Running this displays the 31 observations for the month of January in 1959.

This type of index-based querying can help to prepare summary statistics and plots while exploring the dataset.

Calculating descriptive statistics on your time series can help get an idea of the distribution and spread of values.

This may help with ideas of data scaling and even data cleaning that you can perform later as part of preparing your dataset for modeling.

The describe() function creates a 7 number summary of the loaded time series including mean, standard deviation, median, minimum, and maximum of the observations.

Running this example prints a summary of the birth rate dataset.

This functionality is provided on the loaded Series by calling the plot() function.

Below is an example of plotting the entire loaded time series dataset.

Running the example creates a time series plot with the number of daily births on the y-axis and time in days along the x-axis. 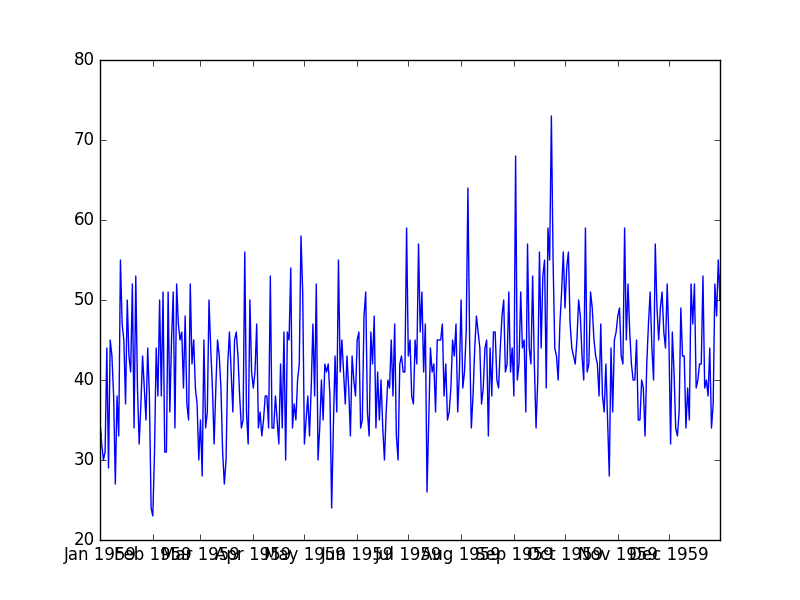 If you’re interested in learning more about Pandas’ functionality working with time series data, see some of the links below.

In this post, you discovered how to load and handle time series data using the Pandas Python library.

Do you have any questions about handling time series data in Python, or about this post?
Ask your questions in the comments below and I will do my best to answer.

Jason Brownlee, PhD is a machine learning specialist who teaches developers how to get results with modern machine learning methods via hands-on tutorials.
View all posts by Jason Brownlee →
How to Go From Working in a Bank To Hired as Senior Data Scientist at Target
How to Normalize and Standardize Time Series Data in Python