By Jason Brownlee on October 31, 2017 in Long Short-Term Memory Networks

Attention is an extension to the encoder-decoder model that improves the performance of the approach on longer sequences. Global attention is a simplification of attention that may be easier to implement in declarative deep learning libraries like Keras and may achieve better results than the classic attention mechanism.

In this post, you will discover the global attention mechanism for encoder-decoder recurrent neural network models. 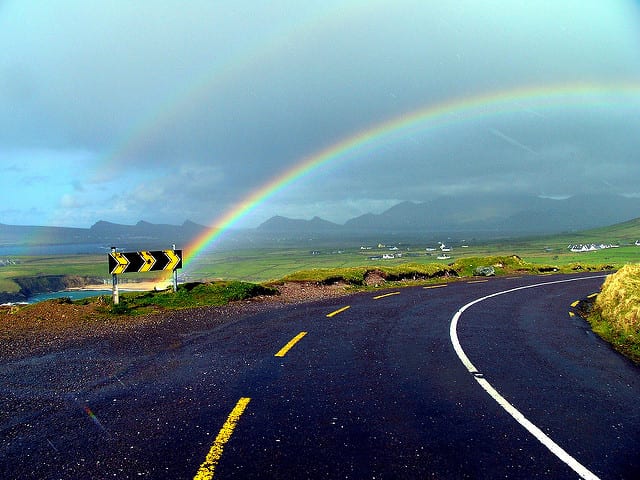 The encoder-decoder model is a way of organizing recurrent neural networks to tackle sequence-to-sequence prediction problems where the number of input and output time steps differ.

The model was developed for the problem of machine translation, such as translating sentences in French to English.

The image below shows the relationship between the encoder and the decoder models.

Example of an Encoder-Decode Network
Taken from “Sequence to Sequence Learning with Neural Networks,” 2014.

The Long Short-Term Memory recurrent neural network is commonly used for the encoder and decoder. The encoder output that describes the source sequence is used to start the decoding process, conditioned on the words already generated as output so far. Specifically, the hidden state of the encoder for the last time step of the input is used to initialize the state of the decoder.

The image below shows the explicit encoding of the source sequence to a context vector c which is used along with the words generated so far to output the next word in the target sequence. 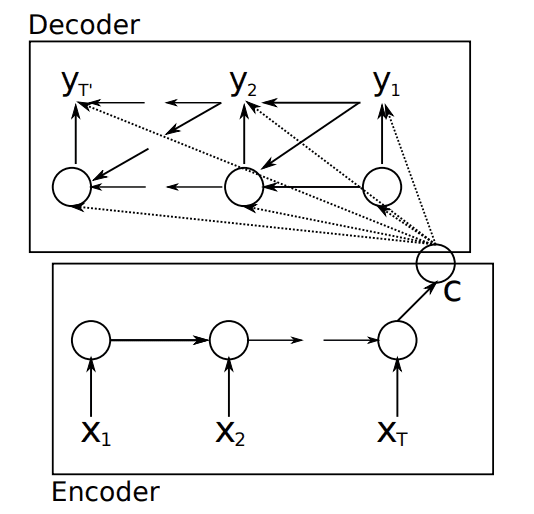 Encoding of Source Sequence to a Context Vector Which is Then Decoded
Taken from “Learning Phrase Representations using RNN Encoder-Decoder for Statistical Machine Translation,” 2014.

However, […], both yt and h(t) are also conditioned on yt−1 and on the summary c of the input sequence.

The encoder-decoder model was shown to be an end-to-end model that performed well on challenging sequence-to-sequence prediction problems such as machine translation.

The model appeared to be limited on very long sequences. The reason for this was believed to be the fixed-length encoding of the source sequence.

In their 2015 paper titled “Neural Machine Translation by Jointly Learning to Align and Translate,” Bahdanau, et al. describe an attention mechanisms to address this issue.

Attention is a mechanism that provides a richer encoding of the source sequence from which to construct a context vector that can then be used by the decoder.

Attention allows the model to learn what encoded words in the source sequence to pay attention to and to what degree during the prediction of each word in the target sequence. 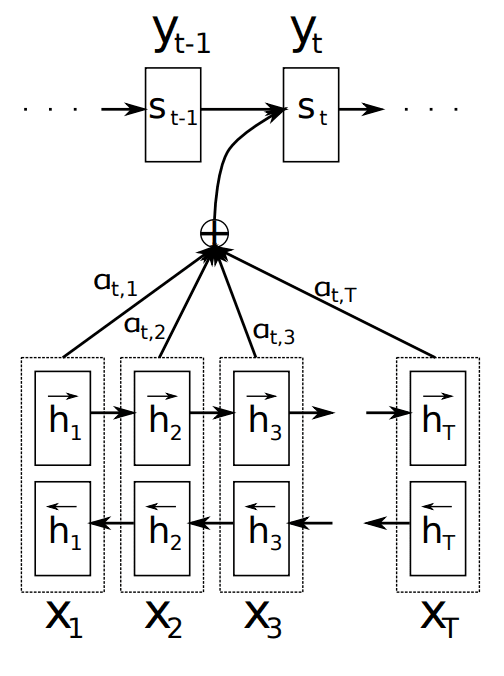 Example of the Encoder-Decoder model with Attention
Taken from “Neural Machine Translation by Jointly Learning to Align and Translate,” 2015.

For a fuller explanation for how Bahdanau attention works with a worked example, see the post:

It is proposed as a simplification of the attention mechanism proposed by Bahdanau, et al. in their paper “Neural Machine Translation by Jointly Learning to Align and Translate.” In Bahdanau attention, the attention calculation requires the output of the decoder from the prior time step.

Global attention, on the other hand, makes use of the output from the encoder and decoder for the current time step only. This makes it attractive to implement in vectorized libraries such as Keras.

The model evaluated in the Luong et al. paper is different from the one presented by Bahdanau, et al. (e.g. reversed input sequence instead of bidirectional inputs, LSTM instead of GRU elements and the use of dropout), nevertheless, the results of the model with global attention achieve better results on a standard machine translation task.

… the global attention approach gives a significant boost of +2.8 BLEU, making our model slightly better than the base attentional system of Bahdanau et al.

Next, let’s take a closer look at how global attention is calculated.

Global attention is an extension of the attentional encoder-decoder model for recurrent neural networks.

Although developed for machine translation, it is relevant for other language generation tasks, such as caption generation and text summarization, and even sequence prediction tasks in general.

We can divide the calculation of global attention into the following computation steps for an encoder-decoder network that predicts one time step given an input sequence. See the paper for the relevant equations.

The final decoding is passed through a softmax to predict the probability of the next word in the sequence over the output vocabulary.

The graphic below provides a high-level idea of the data flow when calculating global attention. 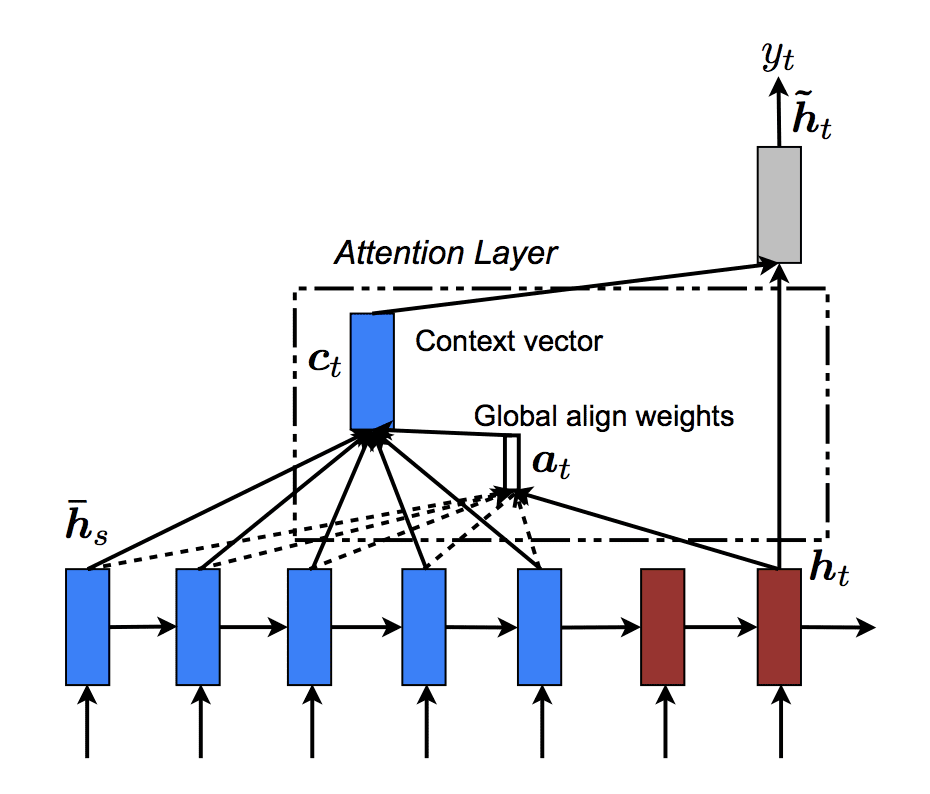 The depiction of Global Attention in an Encoder-Decoder Recurrent Neural Network.
Taken from “Effective Approaches to Attention-based Neural Machine Translation.”

Because of the simpler and more data flow, global attention may be a good candidate for implementing in declarative deep learning libraries such as TensorFlow, Theano, and wrappers like Keras.

In this post, you discovered the global attention mechanism for encoder-decoder recurrent neural network models.