By Jason Brownlee on June 30, 2017 in Long Short-Term Memory Networks

The Encoder-Decoder architecture is popular because it has demonstrated state-of-the-art results across a range of domains.

A limitation of the architecture is that it encodes the input sequence to a fixed length internal representation. This imposes limits on the length of input sequences that can be reasonably learned and results in worse performance for very long input sequences.

In this post, you will discover the attention mechanism for recurrent neural networks that seeks to overcome this limitation. 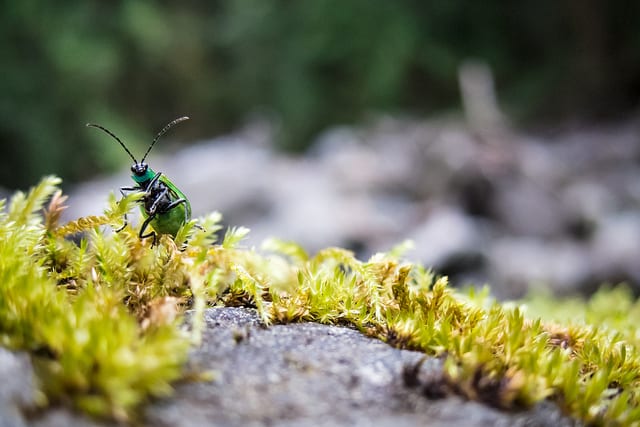 This architecture has shown state-of-the-art results on difficult sequence prediction problems like text translation and quickly became the dominant approach.

The encoder-decoder architecture still achieves excellent results on a wide range of problems. Nevertheless, it suffers from the constraint that all input sequences are forced to be encoded to a fixed length internal vector.

This is believed to limit the performance of these networks, especially when considering long input sequences, such as very long sentences in text translation problems.

Attention is the idea of freeing the encoder-decoder architecture from the fixed-length internal representation.

This is achieved by keeping the intermediate outputs from the encoder LSTM from each step of the input sequence and training the model to learn to pay selective attention to these inputs and relate them to items in the output sequence.

Put another way, each item in the output sequence is conditional on selective items in the input sequence.

… it encodes the input sentence into a sequence of vectors and chooses a subset of these vectors adaptively while decoding the translation. This frees a neural translation model from having to squash all the information of a source sentence, regardless of its length, into a fixed-length vector.

This increases the computational burden of the model, but results in a more targeted and better-performing model.

In addition, the model is also able to show how attention is paid to the input sequence when predicting the output sequence. This can help in understanding and diagnosing exactly what the model is considering and to what degree for specific input-output pairs.

The proposed approach provides an intuitive way to inspect the (soft-)alignment between the words in a generated translation and those in a source sentence. This is done by visualizing the annotation weights… Each row of a matrix in each plot indicates the weights associated with the annotations. From this we see which positions in the source sentence were considered more important when generating the target word.

Convolutional neural networks applied to computer vision problems also suffer from similar limitations, where it can be difficult to learn models on very large images.

As a result, a series of glimpses can be taken of a large image to formulate an approximate impression of the image before making a prediction.

One important property of human perception is that one does not tend to process a whole scene in its entirety at once. Instead humans focus attention selectively on parts of the visual space to acquire information when and where it is needed, and combine information from different fixations over time to build up an internal representation of the scene, guiding future eye movements and decision making.

These glimpse-based modifications may also be considered attention, but are not considered in this post.

5 Examples of Attention in Sequence Prediction

This section provides some specific examples of how attention is used for sequence prediction with recurrent neural networks.

The motivating example mentioned above is text translation.

We extended the basic encoder–decoder by letting a model (soft-)search for a set of input words, or their annotations computed by an encoder, when generating each target word. This frees the model from having to encode a whole source sentence into a fixed-length vector, and also lets the model focus only on information relevant to the generation of the next target word. 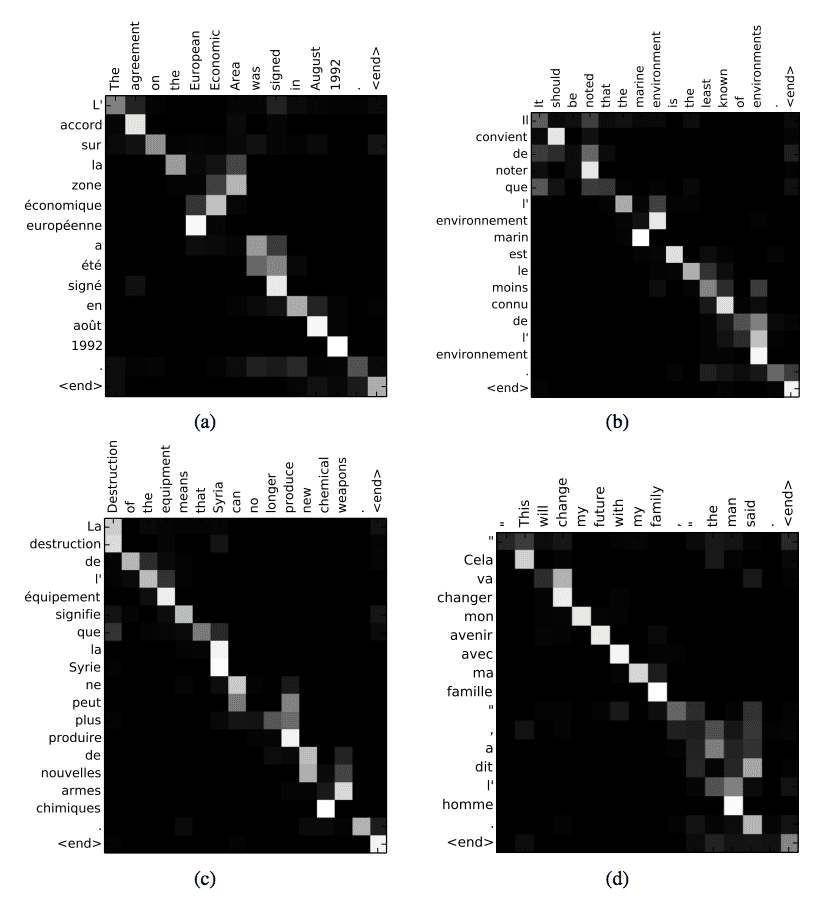 Different from the glimpse approach, the sequence-based attentional mechanism can be applied to computer vision problems to help get an idea of how to best use the convolutional neural network to pay attention to images when outputting a sequence, such as a caption.

Given an input of an image, output an English description of the image. Attention is used to pay focus on different parts of the image for each word in the output sequence.

We propose an attention based approach that gives state of the art performance on three benchmark datasets … We also show how the learned attention can be exploited to give more interpretability into the models generation process, and demonstrate that the learned alignments correspond very well to human intuition.

Given a premise scenario and a hypothesis about the scenario in English, output whether the premise contradicts, is not related, or entails the hypothesis.

Attention is used to relate each word in the hypothesis to words in the premise, and vise-versa.

We present a neural model based on LSTMs that reads two sentences in one go to determine entailment, as opposed to mapping each sentence independently into a semantic space. We extend this model with a neural word-by-word attention mechanism to encourage reasoning over entailments of pairs of words and phrases. … An extension with word-by-word neural attention surpasses this strong benchmark LSTM result by 2.6 percentage points, setting a new state-of-the-art accuracy…

— Reasoning about Entailment with Neural Attention, 2016 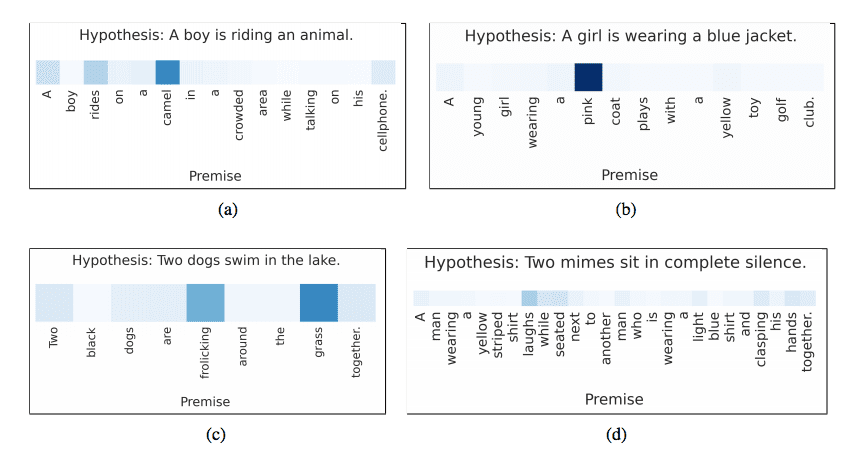 Attentional Interpretation of Premise Words to Hypothesis Words
Taken from Reasoning about Entailment with Neural Attention, 2016

Attention is used to relate each phoneme in the output sequence to specific frames of audio in the input sequence.

… a novel end-to-end trainable speech recognition architecture based on a hybrid attention mechanism which combines both content and location information in order to select the next position in the input sequence for decoding. One desirable property of the proposed model is that it can recognize utterances much longer than the ones it was trained on.

Given an input sequence of an English article, output a sequence of English words that summarize the input.

Attention is used to relate each word in the output summary to specific words in the input document.

… a neural attention-based model for abstractive summarization, based on recent developments in neural machine translation. We combine this probabilistic model with a generation algorithm which produces accurate abstractive summaries. 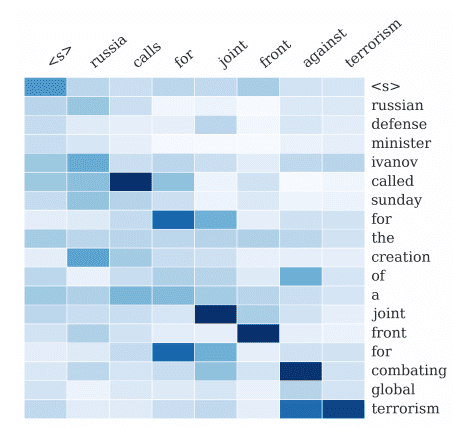 Attentional Interpretation of Words in the Input Document to the Output Summary
Taken from A Neural Attention Model for Abstractive Sentence Summarization, 2015.

This section provides additional resources if you would like to learn more about adding attention to LSTMs.

Keras does not offer attention out of the box at the time of writing, but there are few third-party implementations. See:

Do you know of some good resources on attention in recurrent neural networks?
Let me know in the comments.

In this post, you discovered the attention mechanism for sequence prediction problems with LSTM recurrent neural networks.

Do you have any questions about attention in recurrent neural networks?
Ask your questions in the comments below and I will do my best to answer.

Jason Brownlee, PhD is a machine learning specialist who teaches developers how to get results with modern machine learning methods via hands-on tutorials.
View all posts by Jason Brownlee →
How to Prepare Sequence Prediction for Truncated BPTT in Keras
Gentle Introduction to the Adam Optimization Algorithm for Deep Learning