By Jason Brownlee on September 6, 2017 in Long Short-Term Memory Networks

This creates a network graph or circuit diagram with cycles, which can make it difficult to understand how information moves through the network.

In this post, you will discover the concept of unrolling or unfolding recurrent neural networks.

We can demonstrate this with a picture.

Example of an RNN with a cycle

RNNs are fit and make predictions over many time steps. We can simplify the model by unfolding or unrolling the RNN graph over the input sequence.

A useful way to visualise RNNs is to consider the update graph formed by ‘unfolding’ the network along the input sequence.

We can unfold the above network schematic into a graph without any cycles. 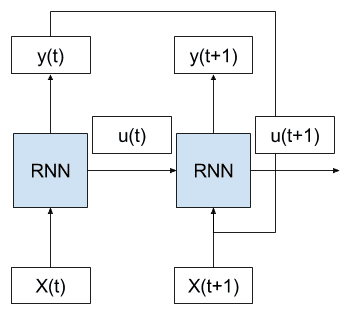 Example of Unrolled RNN on the forward pass

We can see that the cycle is removed and that the output (y(t)) and internal state (u(t)) from the previous time step are passed on to the network as inputs for processing the next time step.

Key in this conceptualization is that the network (RNN) does not change between the unfolded time steps. Specifically, the same weights are used for each time step and it is only the outputs and the internal states that differ.

In this way, it is as though the whole network (topology and weights) are copied for each time step in the input sequence.

Further, each copy of the network may be thought of as an additional layer of the same feed forward neural network. 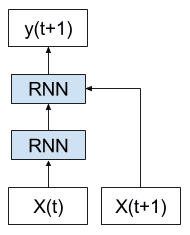 RNNs, once unfolded in time, can be seen as very deep feedforward networks in which all the layers share the same weights.

This is a useful conceptual tool and visualization to help in understanding what is going on in the network during the forward pass. It may or may not also be the way that the network is implemented by the deep learning library.

The idea of network unfolding plays a bigger part in the way recurrent neural networks are implemented for the backward pass.

As is standard with [backpropagation through time] , the network is unfolded over time, so that connections arriving at layers are viewed as coming from the previous timestep.

Importantly, the backpropagation of error for a given time step depends on the activation of the network at the prior time step.

In this way, the backward pass requires the conceptualization of unfolding the network.

Error is propagated back to the first input time step of the sequence so that the error gradient can be calculated and the weights of the network can be updated.

Like standard backpropagation, [backpropagation through time] consists of a repeated application of the chain rule. The subtlety is that, for recurrent networks, the loss function depends on the activation of the hidden layer not only through its influence on the output layer, but also through its influence on the hidden layer at the next timestep.

Unfolding the recurrent network graph also introduces additional concerns. Each time step requires a new copy of the network, which in turn takes up memory, especially for larger networks with thousands or millions of weights. The memory requirements of training large recurrent networks can quickly balloon as the number of time steps climbs into the hundreds.

… it is required to unroll the RNNs by the length of the input sequence. By unrolling an RNN N times, every activations of the neurons inside the network are replicated N times, which consumes a huge amount of memory especially when the sequence is very long. This hinders a small footprint implementation of online learning or adaptation. Also, this “full unrolling” makes a parallel training with multiple sequences inefficient on shared memory models such as graphics processing units (GPUs)

In this tutorial, you discovered the visualization and conceptual tool of unrolling recurrent neural networks.

26 Responses to A Gentle Introduction to RNN Unrolling