By Stefania Cristina on June 16, 2021 in Optimization

Differential evolution is a heuristic approach for the global optimisation of nonlinear and non- differentiable continuous space functions.

The differential evolution algorithm is advantageous over the aforementioned popular approaches because it can handle nonlinear and non-differentiable multi-dimensional objective functions, while requiring very few control parameters to steer the minimisation. These characteristics make the algorithm easier and more practical to use.

In this tutorial, you will discover the differential evolution algorithm for global optimisation.

Differential evolution is a heuristic approach for the global optimisation of nonlinear and non- differentiable continuous space functions.

For a minimisation algorithm to be considered practical, it is expected to fulfil five different requirements:

(1) Ability to handle non-differentiable, nonlinear and multimodal cost functions.
(2) Parallelizability to cope with computation intensive cost functions.
(3) Ease of use, i.e. few control variables to steer the minimization. These variables should
also be robust and easy to choose.
(4) Good convergence properties, i.e. consistent convergence to the global minimum in
consecutive independent trials.

The strength of the differential evolution algorithm stems from the fact that it was designed to fulfil all of the above requirements.

Differential Evolution (DE) is arguably one of the most powerful and versatile evolutionary optimizers for the continuous parameter spaces in recent times.

The algorithm begins by randomly initiating a population of real-valued decision vectors, also known as genomes or chromosomes. These represent the candidates solutions to the multi- dimensional optimisation problem.

At each iteration, the algorithm introduces mutations into the population to generate new candidate solutions. The mutation process adds the weighted difference between two population vectors to a third vector, to produce a mutated vector. The parameters of the mutated vector are again mixed with the parameters of another predetermined vector, the target vector, during a process known as crossover that aims to increase the diversity of the perturbed parameter vectors. The resulting vector is known as the trial vector.

DE generates new parameter vectors by adding the weighted difference between two population vectors to a third vector. Let this operation be called mutation.
In order to increase the diversity of the perturbed parameter vectors, crossover is introduced.

These mutations are generated according to a mutation strategy, which follows a general naming convention of DE/x/y/z, where DE stands for Differential Evolution, while x denotes the vector to be mutated, y denotes the number of difference vectors considered for the mutation of x, and z is the type of crossover in use. For instance, the popular strategies:

Specify that vector x can either be picked randomly (rand) from the population, or else the vector with the lowest cost (best) is selected; that the number of difference vectors under consideration is either 1 or 2; and that crossover is performed according to independent binomial (bin) experiments. The DE/best/2/bin strategy, in particular, appears to be highly beneficial in improving the diversity of the population if the population size is large enough.

The usage of two difference vectors seems to improve the diversity of the population if the number of population vectors NP is high enough.

A final selection operation replaces the target vector, or the parent, by the trial vector, its offspring, if the latter yields a lower objective function value. Hence, the fitter offspring now becomes a member of the newly generated population, and subsequently participates in the mutation of further population members. These iterations continue until a termination criterion is reached.

The iterations continue till a termination criterion (such as exhaustion of maximum functional evaluations) is satisfied.

The differential evolution algorithm requires very few parameters to operate, namely the population size, NP, a real and constant scale factor, F ∈ [0, 2], that weights the differential variation during the mutation process, and a crossover rate, CR ∈ [0, 1], that is determined experimentally. This makes the algorithm easy and practical to use.

In addition, the canonical DE requires very few control parameters (3 to be precise: the scale factor, the crossover rate and the population size) — a feature that makes it easy to use for the practitioners.

Now that we are familiar with the differential evolution algorithm, let’s look at how to implement it from scratch.

In this section, we will explore how to implement the differential evolution algorithm from scratch.
The differential evolution algorithm begins by generating an initial population of candidate solutions. For this purpose, we shall use the rand() function to generate an array of random values sampled from a uniform distribution over the range, [0, 1).

We will then scale these values to change the range of their distribution to (lower bound, upper bound), where the bounds are specified in the form of a 2D array with each dimension corresponding to each input variable.

We can evaluate our initial population of candidate solutions by passing it to the objective function as input argument.

We shall be replacing the values in obj_all with better ones as the population evolves and converges towards an optimal solution.

We can then loop over a predefined number of iterations of the algorithm, such as 100 or 1,000, as specified by parameter, iter, as well as over all candidate solutions.

The first step of the algorithm iteration performs a mutation process. For this purpose, three random candidates, a, b and c, that are not the current one, are randomly selected from the population and a mutated vector is generated by computing: a + F * (b – c). Recall that F ∈ [0, 2] and denotes the mutation scale factor.

The mutation process is performed by the function, mutation, to which we pass a, b, c and F as input arguments.

Since we are operating within a bounded range of values, we need to check whether the newly mutated vector is also within the specified bounds, and if not, clip its values to the upper or lower limits as necessary. This check is carried out by the function, check_bounds.

The next step performs crossover, where specific values of the current, target, vector are replaced by the corresponding values in the mutated vector, to create a trial vector. The decision of which values to replace is based on whether a uniform random value generated for each input variable falls below a crossover rate. If it does, then the corresponding values from the mutated vector are copied to the target vector.

The crossover process is implemented by the crossover() function, which takes the mutated and target vectors as input, as well as the crossover rate, cr ∈ [0, 1], and the number of input variables.

We can tie all steps together into a differential_evolution() function that takes as input arguments the population size, the bounds of each input variable, the total number of iterations, the mutation scale factor and the crossover rate, and returns the best solution found and its evaluation.

Now that we have implemented the differential evolution algorithm, let’s investigate how to use it to optimise an objective function.

In this section, we will apply the differential evolution algorithm to an objective function.
We will use a simple two-dimensional sphere objective function specified within the bounds, [-5, 5]. The sphere function is continuous, convex and unimodal, and is characterised by a single global minimum at f(0, 0) = 0.0.

We will minimise this objective function with the differential evolution algorithm, based on the strategy DE/rand/1/bin.

In order to do so, we must define values for the algorithm parameters, specifically for the population size, the number of iterations, the mutation scale factor and the crossover rate. We set these values empirically to, 10, 100, 0.5 and 0.7 respectively.

We also define the bounds of each input variable.

Next, we carry out the search and report the results.

Running the example reports the progress of the search including the iteration number, and the response from the objective function each time an improvement is detected.

At the end of the search, the best solution is found and its evaluation is reported.

We can then create a line plot of these objective function values to see the relative changes at every improvement during the search.

The line plot shows the objective function evaluation for each improvement, with large changes initially and very small changes towards the end of the search as the algorithm converged on the optima. 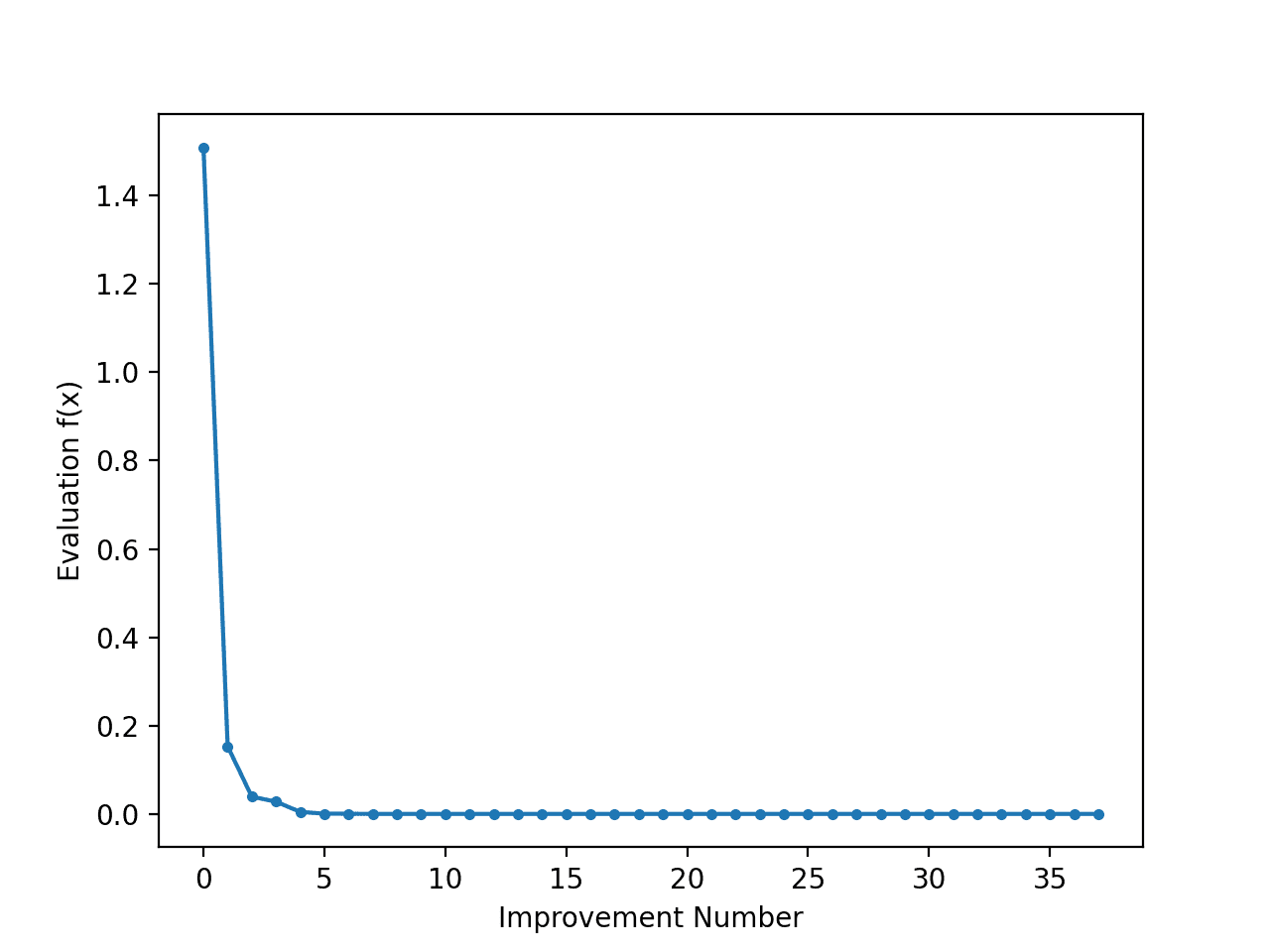 In this tutorial, you discovered the differential evolution algorithm.
Specifically, you learned:

Stefania Cristina, PhD is a Lecturer with the Department of Systems and Control Engineering, at the University of Malta.
View all posts by Stefania Cristina →
Modeling Pipeline Optimization With scikit-learn
What is Calculus?

30 Responses to Differential Evolution from Scratch in Python