By Jason Brownlee on February 26, 2021 in Optimization

It is an evolutionary algorithm related to others, such as the genetic algorithm, although it is designed specifically for continuous function optimization.

In this tutorial, you will discover how to implement the evolution strategies optimization algorithm. 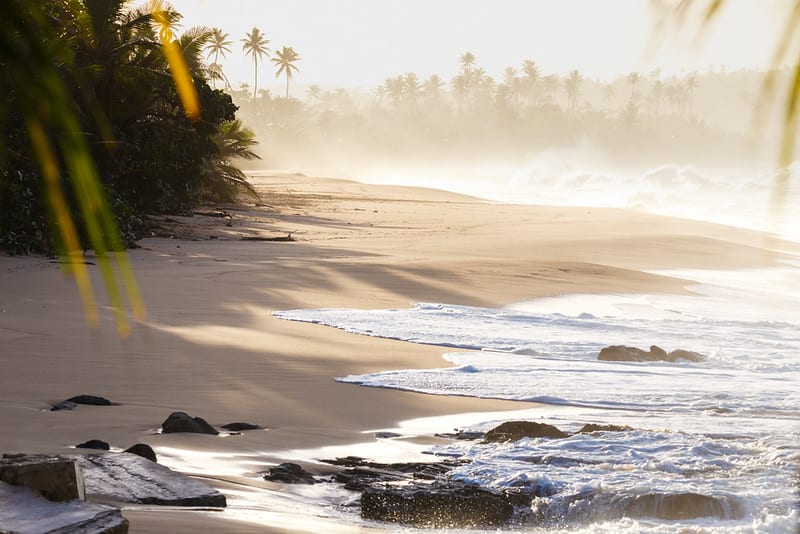 Evolution Strategies From Scratch in Python
Photo by Alexis A. Bermúdez, some rights reserved.

The technique was developed in the 1960s to be implemented manually by engineers for minimal drag designs in a wind tunnel.

The family of algorithms known as Evolution Strategies (ES) were developed by Ingo Rechenberg and Hans-Paul Schwefel at the Technical University of Berlin in the mid 1960s.

Evolution Strategies is a type of evolutionary algorithm and is inspired by the biological theory of evolution by means of natural selection. Unlike other evolutionary algorithms, it does not use any form of crossover; instead, modification of candidate solutions is limited to mutation operators. In this way, Evolution Strategies may be thought of as a type of parallel stochastic hill climbing.

The algorithm involves a population of candidate solutions that initially are randomly generated. Each iteration of the algorithm involves first evaluating the population of solutions, then deleting all but a subset of the best solutions, referred to as truncation selection. The remaining solutions (the parents) each are used as the basis for generating a number of new candidate solutions (mutation) that replace or compete with the parents for a position in the population for consideration in the next iteration of the algorithm (generation).

The number of children created from each parent is calculated as (lambda / mu) and parameters should be chosen so that the division has no remainder.

A bracket notation is used to describe the algorithm configuration, e.g. (mu, lambda)-ES. For example, if mu=5 and lambda=20, then it would be summarized as (5, 20)-ES. A comma (,) separating the mu and lambda parameters indicates that the children replace the parents directly each iteration of the algorithm.

A plus (+) separation of the mu and lambda parameters indicates that the children and the parents together will define the population for the next iteration.

A stochastic hill climbing algorithm can be implemented as an Evolution Strategy and would have the notation (1 + 1)-ES.

This is the simile or canonical ES algorithm and there are many extensions and variants described in the literature.

Now that we are familiar with Evolution Strategies we can explore how to implement the algorithm.

In this section, we will develop a (mu, lambda)-ES, that is, a version of the algorithm where children replace parents.

First, let’s define a challenging optimization problem as the basis for implementing the algorithm.

The Ackley function is an example of a multimodal objective function that has a single global optima and multiple local optima in which a local search might get stuck. 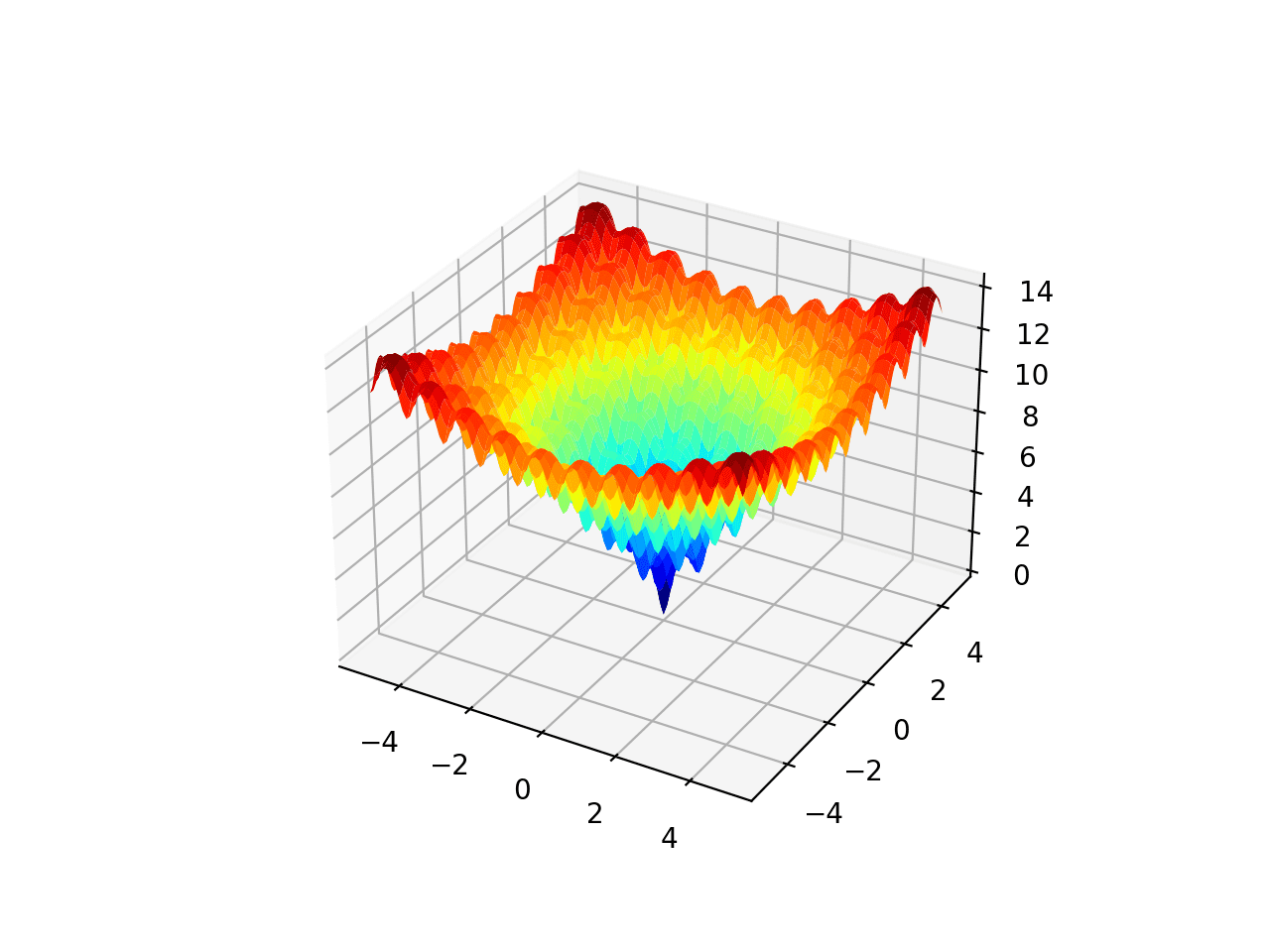 To achieve this, we will develop a function to check whether a candidate solution is within the bounds of the search and then discard it and generate another solution if it is not.

We can then use this function when generating the initial population of “lam” (e.g. lambda) random candidate solutions.

Next, we can iterate over a fixed number of iterations of the algorithm. Each iteration first involves evaluating each candidate solution in the population.

We will calculate the scores and store them in a separate parallel list.

Next, we need to select the “mu” parents with the best scores, lowest scores in this case, as we are minimizing the objective function.

We will do this in two steps. First, we will rank the candidate solutions based on their scores in ascending order so that the solution with the lowest score has a rank of 0, the next has a rank 1, and so on. We can use a double call of the argsort function to achieve this.

We will then use the ranks and select those parents that have a rank below the value “mu.” This means if mu is set to 5 to select 5 parents, only those parents with a rank between 0 and 4 will be selected.

We can then create children for each selected parent.

First, we must calculate the total number of children to create per parent.

We can then iterate over each parent and create modified versions of each.

We will create children using a similar technique used in stochastic hill climbing. Specifically, each variable will be sampled using a Gaussian distribution with the current value as the mean and the standard deviation provided as a “step size” hyperparameter.

The created children can be added to a list and we can replace the population with the list of children at the end of the algorithm iteration.

We can tie all of this together into a function named es_comma() that performs the comma version of the Evolution Strategy algorithm.

The function takes the name of the objective function, the bounds of the search space, the number of iterations, the step size, and the mu and lambda hyperparameters and returns the best solution found during the search and its evaluation.

Next, we can apply this algorithm to our Ackley objective function.

We will run the algorithm for 5,000 iterations and use a step size of 0.15 in the search space. We will use a population size (lambda) of 100 select 20 parents (mu). These hyperparameters were chosen after a little trial and error.

At the end of the search, we will report the best candidate solution found during the search.

Tying this together, the complete example of applying the comma version of the Evolution Strategies algorithm to the Ackley objective function is listed below.

Running the example reports the candidate solution and scores each time a better solution is found, then reports the best solution found at the end of the search.

In this case, we can see that about 22 improvements to performance were seen during the search and the best solution is close to the optima.

No doubt, this solution can be provided as a starting point to a local search algorithm to be further refined, a common practice when using a global optimization algorithm like ES.

Now that we are familiar with how to implement the comma version of evolution strategies, let’s look at how we might implement the plus version.

The plus version of the Evolution Strategies algorithm is very similar to the comma version.

The main difference is that children and the parents comprise the population at the end instead of just the children. This allows the parents to compete with the children for selection in the next iteration of the algorithm.

We can implement the plus version of the algorithm by modifying the function to add parents to the population when creating the children.

The updated version of the function with this addition, and with a new name es_plus() , is listed below.

We can apply this version of the algorithm to the Ackley objective function with the same hyperparameters used in the previous section.

Running the example reports the candidate solution and scores each time a better solution is found, then reports the best solution found at the end of the search.

In this case, we can see that about 24 improvements to performance were seen during the search. We can also see that a better final solution was found with an evaluation of 0.000532, compared to 0.001147 found with the comma version on this objective function.

In this tutorial, you discovered how to implement the evolution strategies optimization algorithm.

Jason Brownlee, PhD is a machine learning specialist who teaches developers how to get results with modern machine learning methods via hands-on tutorials.
View all posts by Jason Brownlee →
Sensitivity Analysis of Dataset Size vs. Model Performance
Differential Evolution Global Optimization With Python

6 Responses to Evolution Strategies From Scratch in Python