By Adrian Tam on September 16, 2021 in Optimization

Particle swarm optimization (PSO) is one of the bio-inspired algorithms and it is a simple one to search for an optimal solution in the solution space. It is different from other optimization algorithms in such a way that only the objective function is needed and it is not dependent on the gradient or any differential form of the objective. It also has very few hyperparameters.

Particle Swarm Optimization was proposed by Kennedy and Eberhart in 1995. As mentioned in the original paper, sociobiologists believe a school of fish or a flock of birds that moves in a group “can profit from the experience of all other members”. In other words, while a bird flying and searching randomly for food, for instance, all birds in the flock can share their discovery and help the entire flock get the best hunt. 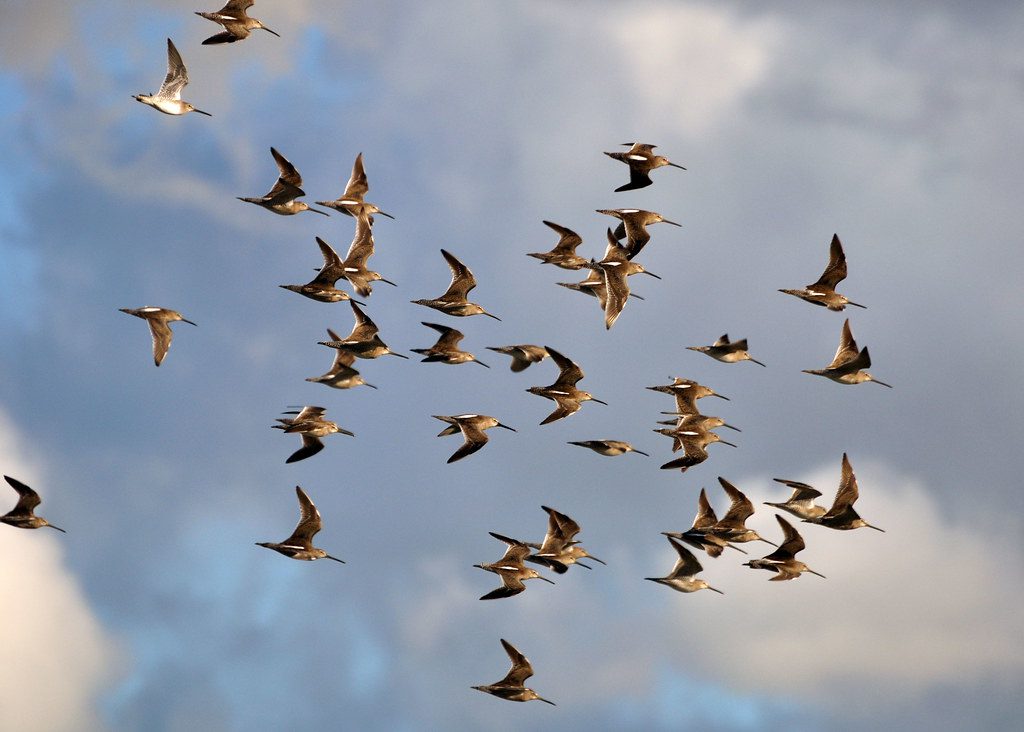 PSO is best used to find the maximum or minimum of a function defined on a multidimensional vector space. Assume we have a function $f(X)$ that produces a real value from a vector parameter $X$ (such as coordinate $(x,y)$ in a plane) and $X$ can take on virtually any value in the space (for example, $f(X)$ is the altitude and we can find one for any point on the plane), then we can apply PSO. The PSO algorithm will return the parameter $X$ it found that produces the minimum $f(X)$.

Let’s start with the following function

As we can see from the plot above, this function looks like a curved egg carton. It is not a convex function and therefore it is hard to find its minimum because a local minimum found is not necessarily the global minimum.

So how can we find the minimum point in this function? For sure, we can resort to exhaustive search: If we check the value of $f(x,y)$ for every point on the plane, we can find the minimum point. Or we can just randomly find some sample points on the plane and see which one gives the lowest value on $f(x,y)$ if we think it is too expensive to search every point. However, we also note from the shape of $f(x,y)$ that if we have found a point with a smaller value of $f(x,y)$, it is easier to find an even smaller value around its proximity. 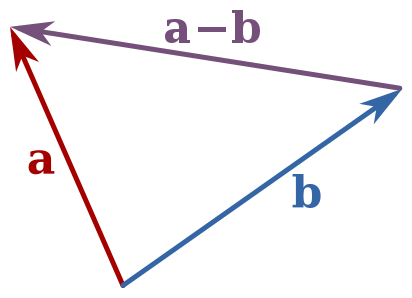 We call the parameter $w$ the inertia weight constant. It is between 0 and 1 and determines how much should the particle keep on with its previous velocity (i.e., speed and direction of the search). The parameters $c_1$ and $c_2$ are called the cognitive and the social coefficients respectively. They controls how much weight should be given between refining the search result of the particle itself and recognizing the search result of the swarm. We can consider these parameters controls the trade off between exploration and exploitation.

The positions $pbest^i$ and $gbest$ are updated in each iteration to reflect the best position ever found thus far.

One interesting property of this algorithm that distinguishs it from other optimization algorithms is that it does not depend on the gradient of the objective function. In gradient descent, for example, we look for the minimum of a function $f(X)$ by moving $X$ to the direction of $-\nabla f(X)$ as it is where the function going down the fastest. For any particle at the position $X$ at the moment, how it moves does not depend on which direction is the “down hill” but only on where are $pbest$ and $gbest$. This makes PSO particularly suitable if differentiating $f(X)$ is difficult.

Another property of PSO is that it can be parallelized easily. As we are manipulating multiple particles to find the optimal solution, each particles can be updated in parallel and we only need to collect the updated value of $gbest$ once per iteration. This makes map-reduce architecture a perfect candidate to implement PSO.

Here we show how we can implement PSO to find the optimal solution.

For the same function as we showed above, we can first define it as a Python function and show it in a contour plot: 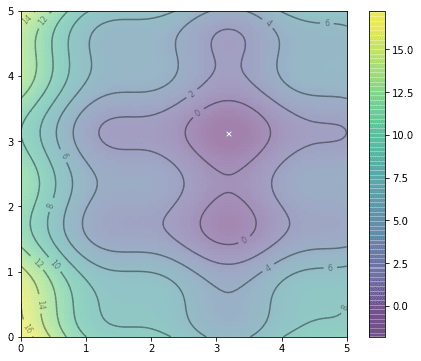 Here we plotted the function $f(x,y)$ in the region of $0\le x,y\le 5$. We can create 20 particles at random locations in this region, together with random velocities sampled over a normal distribution with mean 0 and standard deviation 0.1, as follows:

which we can show their position on the same contour plot: 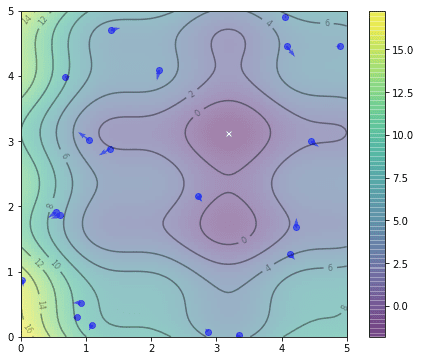 From this, we can already find the $gbest$ as the best position ever found by all the particles. Since the particles did not explore at all, their current position is their $pbest^i$ as well: 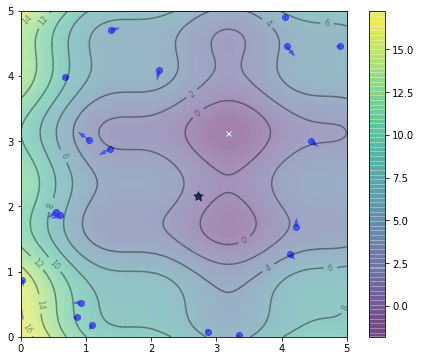 Position of gbest is marked as a star

Let’s set $c_1=c_2=0.1$ and $w=0.8$. Then we can update the positions and velocities according to the formula we mentioned above, and then update $pbest^i$ and $gbest$ afterwards:

The following is the position after the first iteration. We mark the best position of each particle with a black dot to distinguish from their current position, which are set in blue. 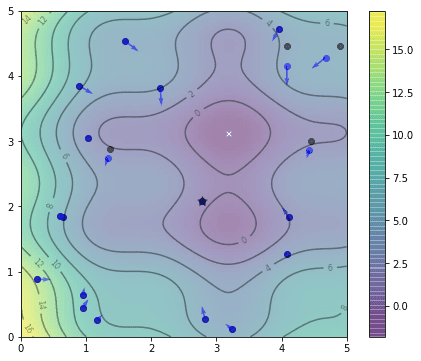 Positions of particles after one iteration

We can repeat the above code segment for multiple times and see how the particles explore. This is the result after the second iteration: 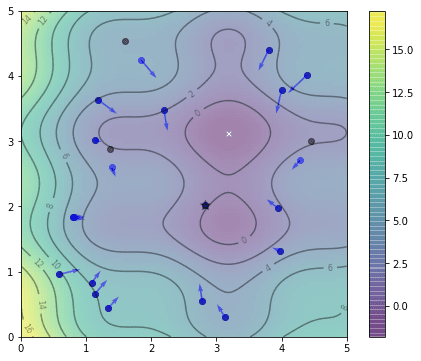 Positions of particles after two iterations

and this is after the 5th iteration, note that the position of $gbest$ as denoted by the star changed: 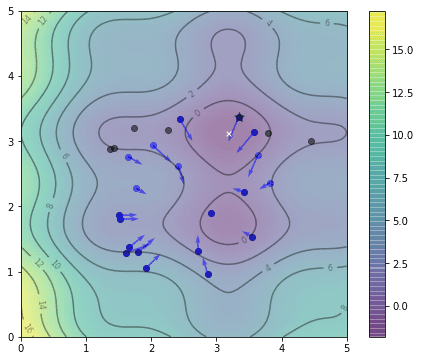 Positions of particles after 5 iterations

and after 20th iteration, we already very close to the optimal: 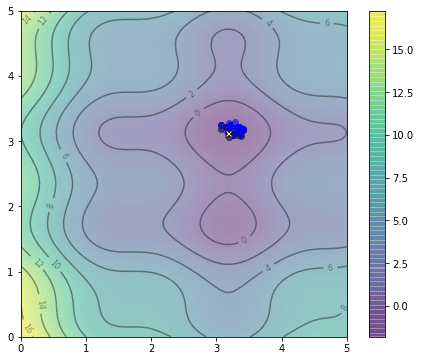 Positions of particles after 20 iterations

This is the animation showing how we find the optimal solution as the algorithm progressed. See if you may find some resemblance to the movement of a flock of birds:

Research on PSO were mostly on how to determine the hyperparameters $w$, $c_1$, and $c_2$ or varying their values as the algorithm progressed. For example, there are proposals making the inertia weight linear decreasing. There are also proposals trying to make the cognitive coefficient $c_1$ decreasing while the social coefficient $c_2$ increasing to bring more exploration at the beginning and more exploitation at the end. See, for example, Shi and Eberhart (1998) and Eberhart and Shi (2000).

It should be easy to see how we can change the above code to solve a higher dimensional objective function, or switching from minimization to maximization. The following is the complete example of finding the minimum point of the function $f(x,y)$ proposed above, together with the code to generate the plot animation:

These are the original papers that proposed the particle swarm optimization, and the early research on refining its hyperparameters:

In this tutorial we learned:

As particle swarm optimization does not have a lot of hyper-parameters and very permissive on the objective function, it can be used to solve a wide range of problems.

54 Responses to A Gentle Introduction to Particle Swarm Optimization