By Jason Brownlee on March 29, 2014 in Weka Machine Learning

This post is part 1 in a 3 part series on modeling the famous Pima Indians Diabetes dataset that will introduce the problem and the data. Part 2 will investigate feature selection and spot checking algorithms and Part 3 in the series will investigate improvements to the classification accuracy and final presentation of results.

Predict the Onset of Diabetes

Data mining and machine learning is helping medical professionals make diagnosis easier by bridging the gap between huge data sets and human knowledge. We can begin to apply machine learning techniques for classification in a dataset that describes a population that is under a high risk of the onset of diabetes.

Diabetes Mellitus affects 382 million people in the world, and the number of people with type-2 diabetes is increasing in every country. Untreated, diabetes can cause many complications. 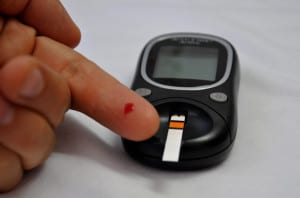 The population for this study was the Pima Indian population near Phoenix, Arizona. The population has been under continuous study since 1965 by the National Institute of Diabetes and Digestive and Kidney Diseases because of its high incidence rate of diabetes.

For the purposes of this dataset, diabetes was diagnosed according to World Health Organization Criteria, which stated that if the 2 hour post-load glucose was at least 200 mg/dl at any survey exam or if the Indian Health Service Hospital serving the community found a glucose concentration of at least 200 mg/dl during the course of routine medical care.

Given the medical data we can gather about people, we should be able to make better predictions on how likely a person is to suffer the onset of diabetes, and therefore act appropriately to help. We can start analyzing data and experimenting with algorithms that will help us study the onset of diabetes in Pima Indians.

Our study begins with an in-depth look of how researchers that used the same dataset approached the same problem. This helped me gain an understanding of the data and pave the way for my study, especially since the authors suggested alternative methods that are worth researching.

In 1988, Smith, Everhart, Dickson, Knowler, and Johannes performed an evaluation of using an early neural network model, ADAP, to forecast the onset of diabetes mellitus in a high-risk population of Pima Indians. They argued that the neural network approach would provide strong results when “the sample size is small, the form of underlying functional relationship is not known, and the underlying functional relationships involve complex interactions and intercorrelations among a number of variables“, see Using the ADAP Learning Algorithm to Forecast the Onset of Diabetes Mellitus.

They describe ADAP as “an adaptive learning routine that generates and executes digital analogs of perceptron-like devices“, see Learning in Control and Pattern Recognition Systems. The algorithm will make predictions based on a function of input variables, and will make internal adjustments if predictions are incorrect. The network is split into 3 main layers:

The network defined a “fixed matrix” that contained a partition for each attribute, a range of possible values, and the ability to identify connections in the data through a “variable array.” Rows in the matrix correspond to sensors, while columns correspond to association units. The variable array provided a way to easily identify connections between sensors and association units.

We can learn from the data found on UCI Machine Learning Repository which contains data on female patients at least 21 years old of Pima Indian heritage (update: download from here).

We have 768 instances and the following 8 attributes:

A particularly interesting attribute used in the study was the Diabetes Pedigree Function, pedi. It provided some data on diabetes mellitus history in relatives and the genetic relationship of those relatives to the patient. This measure of genetic influence gave us an idea of the hereditary risk one might have with the onset of diabetes mellitus. Based on observations in the proceeding section, it is unclear how well this function predicts the onset of diabetes.

At first, I examined each attribute and reviewed the distribution parameters that Weka Explorer had prepared. I observed that: 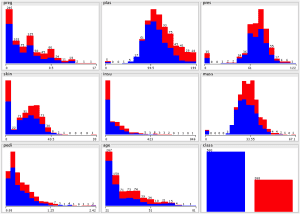 Reviewing histograms of all attributes in the dataset shows us that:

Reviewing scatter plots of all attributes in the dataset shows that: 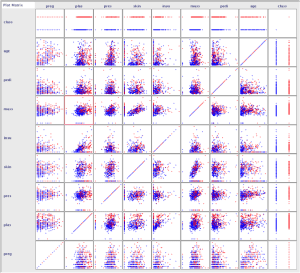 It is important to consider all possible limitations of the data, which may include the following: 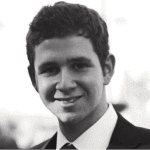 Hey! My name is Igor Shvartser and I’m studying math and computer science at the University of California in Santa Cruz. I’ve been really interested in machine learning, and was recently inspired to learn more after finishing a course called Machine Learning and Data Mining at my school.

I discovered the Machine Learning Mastery website, and found it really helpful, particularly with complementing the material in my course. Shortly after, I was excited to see that Jason reached out to me via email, and gave me an opportunity to contribute to his website. We were able to design a machine learning project that I’ll be working on over the next few weeks using Weka, a suite of machine learning software written at the University of Waikato. I hope to learn more about machine learning algorithms, applications, and data analysis, and will receive coaching from Jason whenever I may get stuck.

When I’m not learning about machine learning, I’m either mountain biking or working with a team to develop open source software that will let scientists analyze and collect data on images of molecular polymers. Before that, I was able to help change the way companies manage and understand their sustainability data within a small start-up in Santa Cruz. 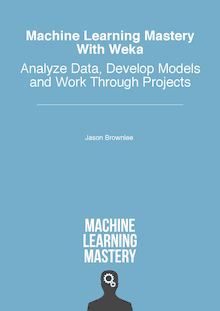 14 Responses to Case Study: Predicting the Onset of Diabetes Within Five Years (part 1 of 3)