By Jason Brownlee on December 6, 2017 in Long Short-Term Memory Networks

Teacher forcing is a method for quickly and efficiently training recurrent neural network models that use the ground truth from a prior time step as input.

It is a network training method critical to the development of deep learning language models used in machine translation, text summarization, and image captioning, among many other applications.

In this post, you will discover the teacher forcing as a method for training recurrent neural networks. 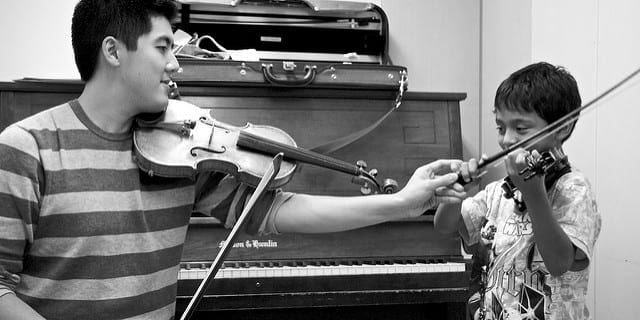 What is Teacher Forcing for Recurrent Neural Networks?
Photo by Nathan Russell, some rights reserved.

There are sequence prediction models that use the output from the last time step y(t-1) as input for the model at the current time step X(t).

This type of model is common in language models that output one word at a time and use the output word as input for generating the next word in the sequence.

For example, this type of language model is used in an Encoder-Decoder recurrent neural network architecture for sequence-to-sequence generation problems such as:

After the model is trained, a “start-of-sequence” token can be used to start the process and the generated word in the output sequence is used as input on the subsequent time step, perhaps along with other input like an image or a source text.

This same recursive output-as-input process can be used when training the model, but it can result in problems such as:

Teacher forcing is an approach to improve model skill and stability when training these types of models.

What is Teacher Forcing?

Teacher forcing is a strategy for training recurrent neural networks that uses ground truth as input, instead of model output from a prior time step as an input.

Models that have recurrent connections from their outputs leading back into the model may be trained with teacher forcing.

The approach was originally described and developed as an alternative technique to backpropagation through time for training a recurrent neural network.

An interesting technique that is frequently used in dynamical supervised learning tasks is to replace the actual output y(t) of a unit by the teacher signal d(t) in subsequent computation of the behavior of the network, whenever such a value exists. We call this technique teacher forcing.

Teacher forcing works by using the actual or expected output from the training dataset at the current time step y(t) as input in the next time step X(t+1), rather than the output generated by the network.

Teacher forcing is a procedure […] in which during training the model receives the ground truth output y(t) as input at time t + 1.

Given the following input sequence:

Imagine we want to train a model to generate the next word in the sequence given the previous sequence of words.

Next, we feed the model “[START]” and let the model generate the next word.

Imagine the model generates the word “a“, but of course, we expected “Mary“.

Naively, we could feed in “a” as part of the input to generate the subsequent word in the sequence.

You can see that the model is off track and is going to get punished for every subsequent word it generates. This makes learning slower and the model unstable.

Instead, we can use teacher forcing.

In the first example when the model generated “a” as output, we can discard this output after calculating error and feed in “Mary” as part of the input on the subsequent time step.

We can then repeat this process for each input-output pair of words.

The model will learn the correct sequence, or correct statistical properties for the sequence, quickly.

Teacher forcing is a fast and effective way to train a recurrent neural network that uses output from prior time steps as input to the model.

But, the approach can also result in models that may be fragile or limited when used in practice when the generated sequences vary from what was seen by the model during training.

This is common in most applications of this type of model as the outputs are probabilistic in nature. This type of application of the model is often called open loop.

There are a number of approaches to address this limitation, for example:

One approach commonly used for models that predict a discrete value output, such as a word, is to perform a search across the predicted probabilities for each word to generate a number of likely candidate output sequences.

This approach is used on problems like machine translation to refine the translated output sequence.

A common search procedure for this post-hoc operation is the beam search.

The beam search approach is only suitable for prediction problems with discrete output values and cannot be used for real-valued outputs.

A variation of forced learning is to introduce outputs generated from prior time steps during training to encourage the model to learn how to correct its own mistakes.

We propose to change the training process in order to gradually force the model to deal with its own mistakes, as it would have to during inference.

The approach is called curriculum learning and involves randomly choosing to use the ground truth output or the generated output from the previous time step as input for the current time step.

The curriculum changes over time in what is called scheduled sampling where the procedure starts at forced learning and slowly decreases the probability of a forced input over the training epochs.

There are also other extensions and variations of teacher forcing and I encourage you to explore them if you are interested.

In this post, you discovered teacher forcing as a method for training recurrent neural networks that use output from a previous time step as input.

50 Responses to What is Teacher Forcing for Recurrent Neural Networks?