A Gentle Introduction to Taylor Series

Taylor series expansion is an awesome concept, not only the world of mathematics, but also in optimization theory, function approximation and machine learning. It is widely applied in numerical computations when estimates of a function’s values at different points are required.

In this tutorial, you will discover Taylor series and how to approximate the values of a function around different points using its Taylor series expansion.

What Is A Power Series?

The following is a power series about the center x=a and constant coefficients c_0, c_1, etc.

What Is A Taylor Series?

It is an amazing fact that functions which are infinitely differentiable can generate a power series called the Taylor series. Suppose we have a function f(x) and f(x) has derivatives of all orders on a given interval, then the Taylor series generated by f(x) at x=a is given by:

The second line of the above expression gives the value of the kth coefficient.

If we set a=0, then we have an expansion called the Maclaurin series expansion of f(x).

Taylor series generated by f(x) = 1/x can be found by first differentiating the function and finding a general expression for the kth derivative.

The Taylor series about various points can now be found. For example:

A Taylor polynomial of order k, generated by f(x) at x=a is given by:

For the example of f(x)=1/x, the Taylor polynomial of order 2 is given by: 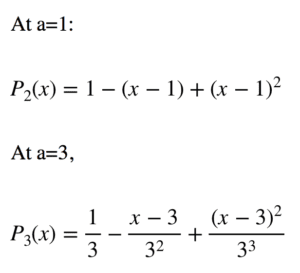 In the graph below, the function 1/x is plotted around the point x=1 (left) and x=3 (right). The line in green is the actual function f(x)= 1/x. The pink line represents the approximation via an order 2 polynomial.

The actual function (green) and its approximation (pink)

Hence, around x=0, the series expansion of g(x) is given by (obtained by setting a=0):

The polynomial of order k generated for the function e^x around the point x=0 is given by:

The plots below show polynomials of different orders that estimate the value of e^x around x=0. We can see that as we move away from zero, we need more terms to approximate e^x more accurately. The green line representing the actual function is hiding behind the blue line of the approximating polynomial of order 7. 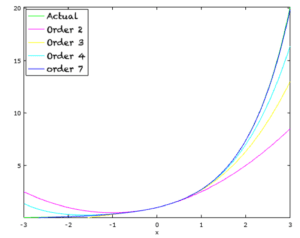 In this tutorial, you discovered what is Taylor series expansion of a function about a point. Specifically, you learned:

A Gentle Introduction To Approximation
Calculus in Action: Neural Networks

4 Responses to A Gentle Introduction to Taylor Series