By Jason Brownlee on October 14, 2019 in Probability

Information theory is a subfield of mathematics concerned with transmitting data across a noisy channel.

A cornerstone of information theory is the idea of quantifying how much information there is in a message. More generally, this can be used to quantify the information in an event and a random variable, called entropy, and is calculated using probability.

In this post, you will discover a gentle introduction to information entropy. 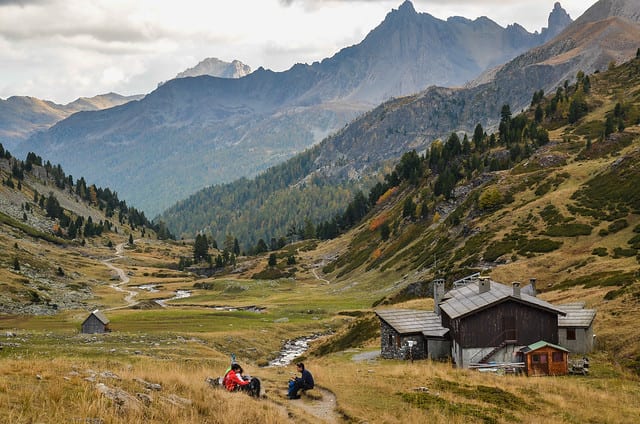 What Is Information Theory?

Information theory is a field of study concerned with quantifying information for communication.

It is a subfield of mathematics and is concerned with topics like data compression and the limits of signal processing. The field was proposed and developed by Claude Shannon while working at the US telephone company Bell Labs.

Information theory is concerned with representing data in a compact fashion (a task known as data compression or source coding), as well as with transmitting and storing it in a way that is robust to errors (a task known as error correction or channel coding).

A foundational concept from information is the quantification of the amount of information in things like events, random variables, and distributions.

Measurements of information are widely used in artificial intelligence and machine learning, such as in the construction of decision trees and the optimization of classifier models.

As such, there is an important relationship between information theory and machine learning and a practitioner must be familiar with some of the basic concepts from the field.

Calculate the Information for an Event

Rare events are more uncertain or more surprising and require more information to represent them than common events.

We can calculate the amount of information there is in an event using the probability of the event. This is called “Shannon information,” “self-information,” or simply the “information,” and can be calculated for a discrete event x as follows:

Where log() is the base-2 logarithm and p(x) is the probability of the event x.

The choice of the base-2 logarithm means that the units of the information measure is in bits (binary digits). This can be directly interpreted in the information processing sense as the number of bits required to represent the event.

The calculation of information is often written as h(); for example:

The negative sign ensures that the result is always positive or zero.

Information will be zero when the probability of an event is 1.0 or a certainty, e.g. there is no surprise.

Let’s make this concrete with some examples.

Consider a flip of a single fair coin. The probability of heads (and tails) is 0.5. We can calculate the information for flipping a head in Python using the log2() function.

Running the example prints the probability of the event as 50% and the information content for the event as 1 bit.

If the same coin was flipped n times, then the information for this sequence of flips would be n bits.

If the coin was not fair and the probability of a head was instead 10% (0.1), then the event would be more rare and would require more than 3 bits of information.

We know the probability of rolling any number is 1/6, which is a smaller number than 1/2 for a coin flip, therefore we would expect more surprise or a larger amount of information.

Running the example, we can see that our intuition is correct and that indeed, there is more than 2.5 bits of information in a single roll of a fair die.

Other logarithms can be used instead of the base-2. For example, it is also common to use the natural logarithm that uses base-e (Euler’s number) in calculating the information, in which case the units are referred to as “nats.”

We can further develop the intuition that low probability events have more information.

Running the example creates the plot of probability vs information in bits.

We can also see that this relationship is not linear, it is in-fact slightly sub-linear. This makes sense given the use of the log function. 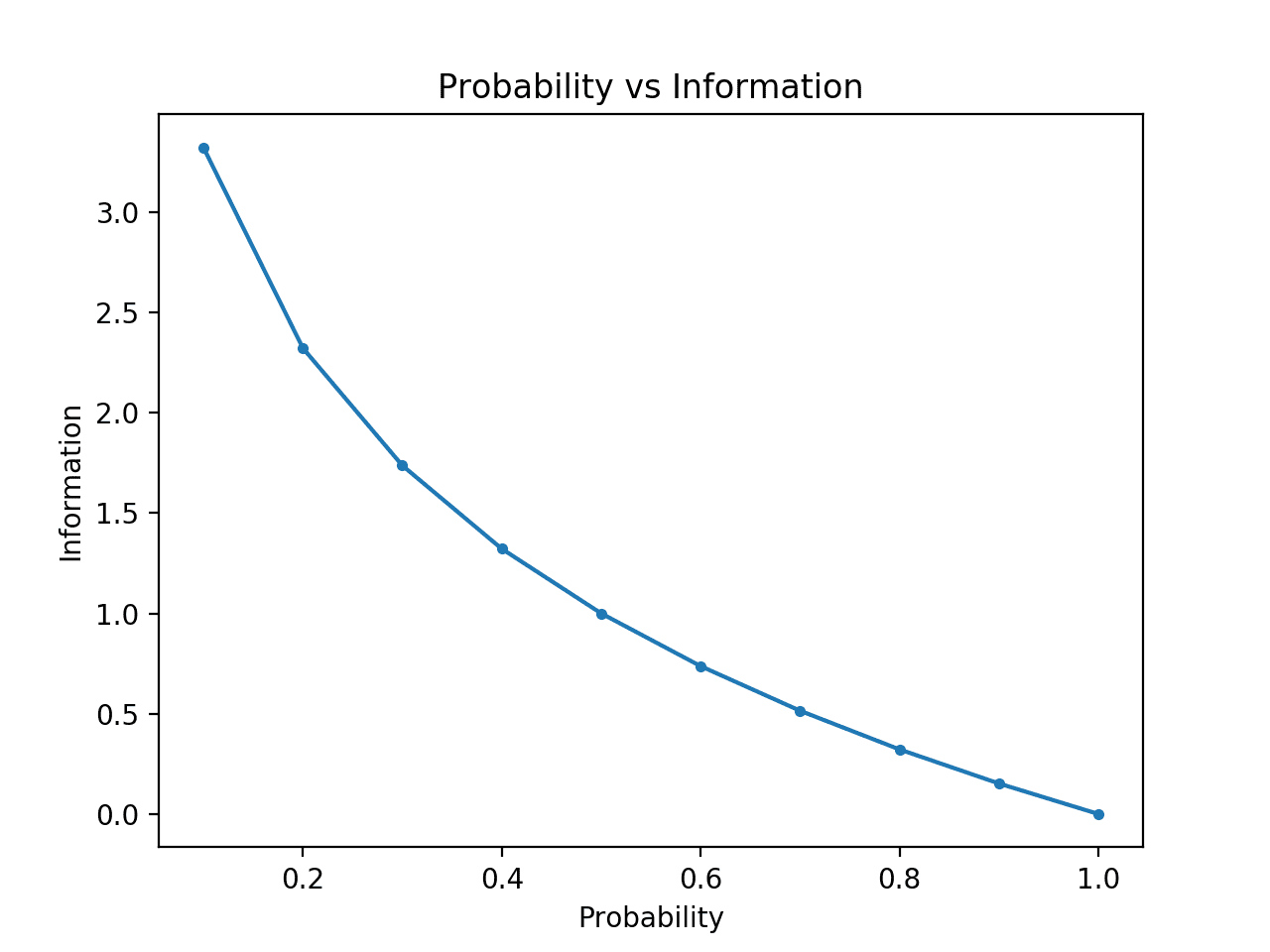 Plot of Probability vs Information

Calculate the Entropy for a Random Variable

We can also quantify how much information there is in a random variable.

For example, if we wanted to calculate the information for a random variable X with probability distribution p, this might be written as a function H(); for example:

Calculating the information for a random variable is called “information entropy,” “Shannon entropy,” or simply “entropy“. It is related to the idea of entropy from physics by analogy, in that both are concerned with uncertainty.

The intuition for entropy is that it is the average number of bits required to represent or transmit an event drawn from the probability distribution for the random variable.

Entropy can be calculated for a random variable X with k in K discrete states as follows:

Like information, the log() function uses base-2 and the units are bits. A natural logarithm can be used instead and the units will be nats.

We can consider a roll of a fair die and calculate the entropy for the variable. Each outcome has the same probability of 1/6, therefore it is a uniform probability distribution. We therefore would expect the average information to be the same information for a single event calculated in the previous section.

If we know the probability for each event, we can use the entropy() SciPy function to calculate the entropy directly.

Running the example reports the same result that we calculated manually.

We can further develop the intuition for entropy of probability distributions.

Recall that entropy is the number of bits required to represent a randomly drawn even from the distribution, e.g. an average event. We can explore this for a simple distribution with two events, like a coin flip, but explore different probabilities for these two events and calculate the entropy for each.

The example below implements this, creating each probability distribution in this transition, calculating the entropy for each and plotting the result.

As expected, we can see that as the distribution of events changes from skewed to balanced, the entropy increases from minimal to maximum values.

That is, if the average event drawn from a probability distribution is not surprising we get a lower entropy, whereas if it is surprising, we get a larger entropy.

We can see that the transition is not linear, that it is super linear. We can also see that this curve is symmetrical if we continued the transition to [0.6, 0.4] and onward to [1.0, 0.0] for the two events, forming an inverted parabola-shape.

Note we had to add a tiny value to the probability when calculating the entropy to avoid calculating the log of a zero value, which would result in an infinity on not a number. 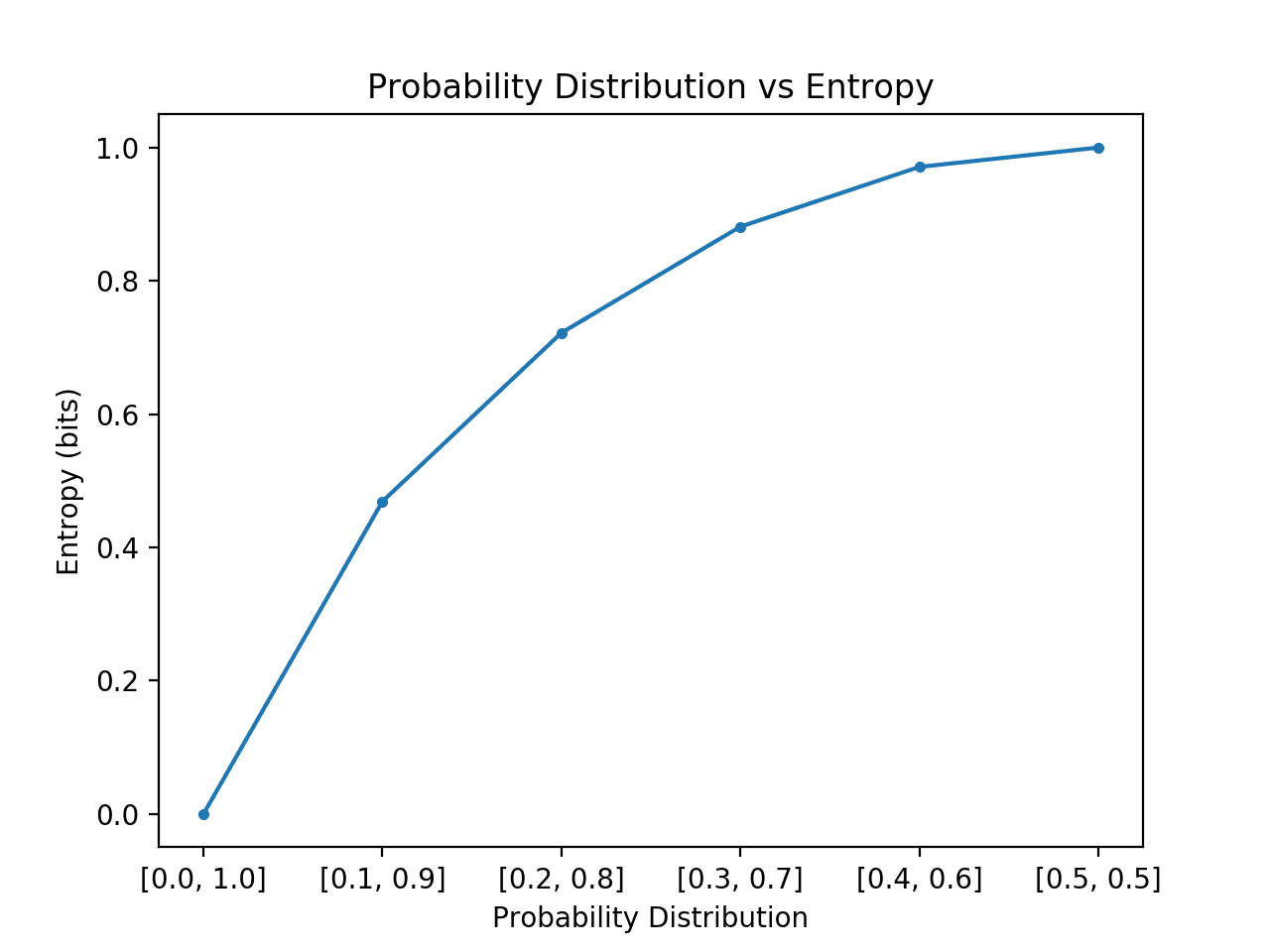 Plot of Probability Distribution vs Entropy

Calculating the entropy for a random variable provides the basis for other measures such as mutual information (information gain).

Entropy also provides the basis for calculating the difference between two probability distributions with cross-entropy and the KL-divergence.

In this post, you discovered a gentle introduction to information entropy.

51 Responses to A Gentle Introduction to Information Entropy