This tutorial is designed for anyone looking for a deeper understanding of how Lagrange multipliers are used in building up the model for support vector machines (SVMs). SVMs were initially designed to solve binary classification problems and later extended and applied to regression and unsupervised learning. They have shown their success in solving many complex machine learning classification problems.

In this tutorial, we’ll look at the simplest SVM that assumes that the positive and negative examples can be completely separated via a linear hyperplane. 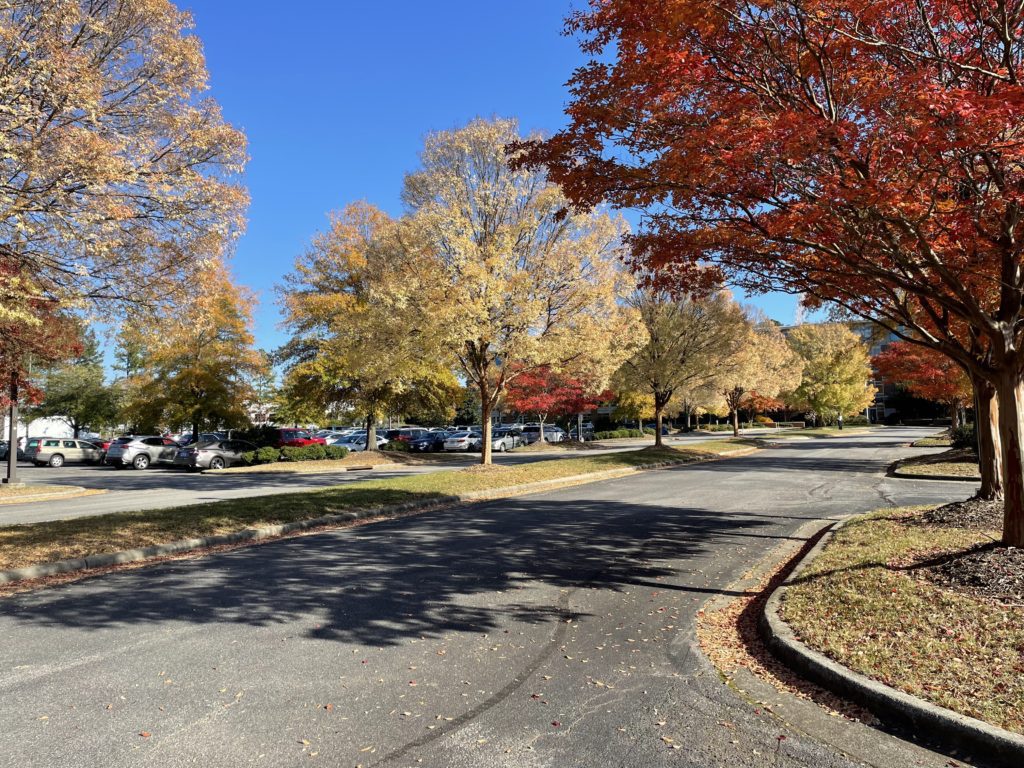 Notations Used In This Tutorial

The Hyperplane As The Decision Boundary 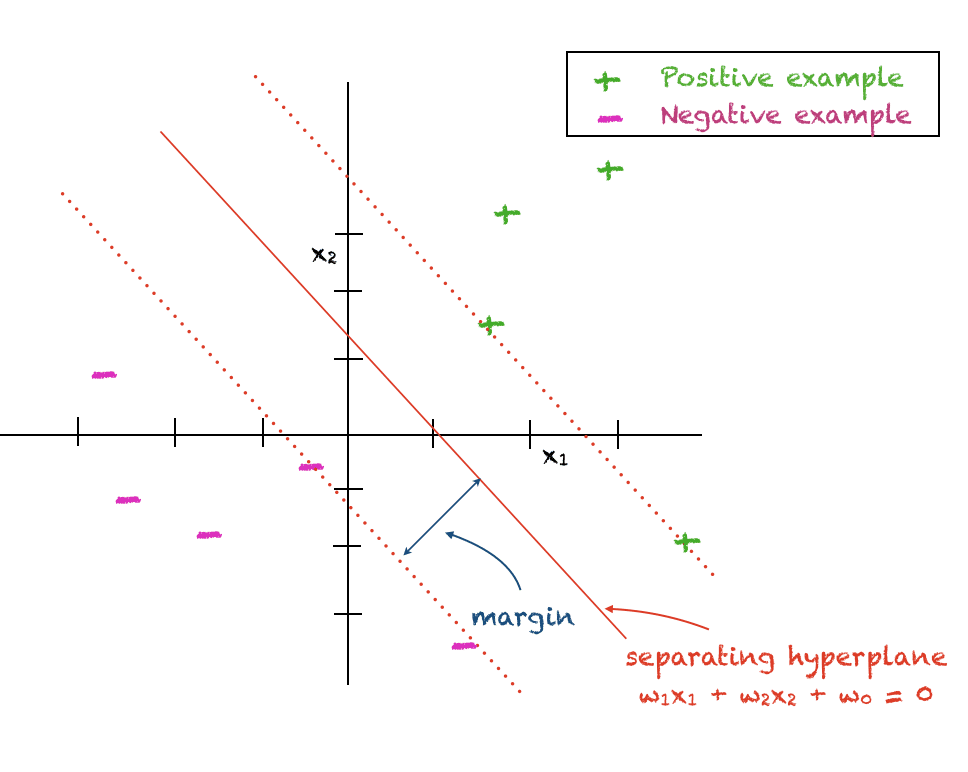 The support vector machine is designed to discriminate data points belonging to two different classes. One set of points is labelled as +1 also called the positive class. The other set of points is labeled as -1 also called the negative class. For now, we’ll make a simplifying assumption that points from both classes can be discriminated via linear hyperplane.

The SVM assumes a linear decision boundary between the two classes and the goal is to find a hyperplane that gives the maximum separation between the two classes. For this reason, the alternate term maximum margin classifier is also sometimes used to refer to an SVM. The perpendicular distance between the closest data point and the decision boundary is referred to as the margin. As the margin completely separates the positive and negative examples and does not tolerate any errors, it is also called the hard margin.

The mathematical expression for a hyperplane is given below with \(w_j\) being the coefficients and \(w_0\) being the arbitrary constant that determines the distance of the hyperplane from the origin:

The perpendicular distance $d_i$ of a data point $x_i$ from the margin is given by:

To maximize this distance, we can minimize the square of the denominator to give us a quadratic programming problem given by:

Solution Via The Method Of Lagrange Multipliers

To solve the above quadratic programming problem with inequality constraints, we can use the method of Lagrange multipliers. The Lagrange function is therefore:

To solve the above, we set the following:

Plugging above in the Lagrange function gives us the following optimization problem, also called the dual:

We have to maximize the above subject to the following:

The nice thing about the above is that we have an expression for \(w\) in terms of Lagrange multipliers. The objective function involves no $w$ term. There is a Lagrange multiplier associated with each data point. The computation of $w_0$ is also explained later.

Deciding The Classification of a Test Point

The classification of any test point $x$ can be determined using this expression:

The KKT conditions dictate that for each data point one of the following is true:

To help you understand the above concepts, here is a simple arbitrarily solved example. Of course, for a large number of points you would use an optimization software to solve this. Also, this is one possible solution that satisfies all the constraints. The objective function can be maximized further but the slope of the hyperplane will remain the same for an optimal solution. Also, for this example, $w_0$ was computed by taking the average of $w_0$ from all three support vectors.

This example will show you that the model is not as complex as it looks. 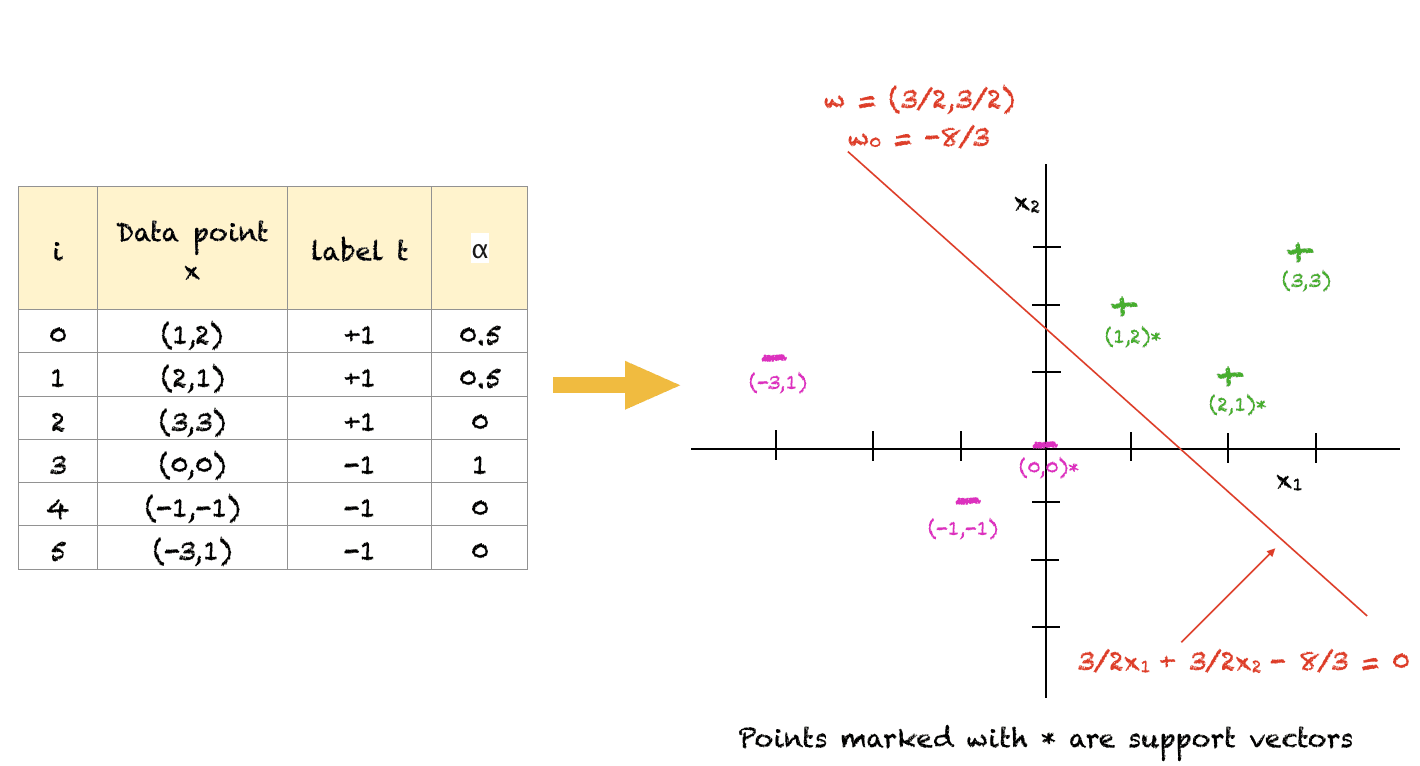 For the above set of points, we can see that (1,2), (2,1) and (0,0) are points closest to the separating hyperplane and hence, act as support vectors. Points far away from the boundary (e.g. (-3,1)) do not play any role in determining the classification of the points.

In this tutorial, you discovered how to use the method of Lagrange multipliers to solve the problem of maximizing the margin via a quadratic programming problem with inequality constraints.

Do you have any questions about the SVM discussed in this post? Ask your questions in the comments below and I will do my best to answer.

2 Responses to Method of Lagrange Multipliers: The Theory Behind Support Vector Machines (Part 1: The Separable Case)