A limitation of gradient descent is that it uses the same step size (learning rate) for each input variable. AdaGrad, for short, is an extension of the gradient descent optimization algorithm that allows the step size in each dimension used by the optimization algorithm to be automatically adapted based on the gradients seen for the variable (partial derivatives) over the course of the search.

A limitation of AdaGrad is that it can result in a very small step size for each parameter by the end of the search that can slow the progress of the search down too much and may mean not locating the optima.

Root Mean Squared Propagation, or RMSProp, is an extension of gradient descent and the AdaGrad version of gradient descent that uses a decaying average of partial gradients in the adaptation of the step size for each parameter. The use of a decaying moving average allows the algorithm to forget early gradients and focus on the most recently observed partial gradients seen during the progress of the search, overcoming the limitation of AdaGrad.

In this tutorial, you will discover how to develop the gradient descent with RMSProp optimization algorithm from scratch. 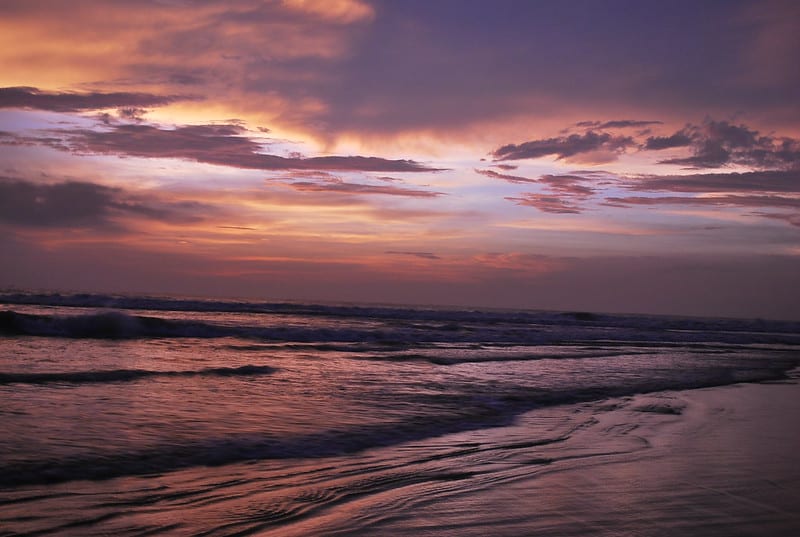 Gradient Descent With RMSProp from Scratch
Photo by pavel ahmed, some rights reserved.

It is technically referred to as a first-order optimization algorithm as it explicitly makes use of the first order derivative of the target objective function.

Now that we are familiar with the gradient descent optimization algorithm, let’s take a look at RMSProp.

Root Mean Squared Propagation, or RMSProp for short, is an extension to the gradient descent optimization algorithm.

It is an unpublished extension, first described in Geoffrey Hinton’s lecture notes for his Coursera course on neural networks, specifically Lecture 6e titled “rmsprop: Divide the gradient by a running average of its recent magnitude.”

RMSProp is designed to accelerate the optimization process, e.g. decrease the number of function evaluations required to reach the optima, or to improve the capability of the optimization algorithm, e.g. result in a better final result.

It is related to another extension to gradient descent called Adaptive Gradient, or AdaGrad.

The calculation of the custom step size for one parameter is as follows:

This has the effect of smoothing out the oscillations in the search for optimization problems that have a lot of curvature in the search space.

A problem with AdaGrad is that it can slow the search down too much, resulting in very small learning rates for each parameter or dimension of the search by the end of the run. This has the effect of stopping the search too soon, before the minimal can be located.

RMSProp extends Adagrad to avoid the effect of a monotonically decreasing learning rate.

RMSProp can be thought of as an extension of AdaGrad in that it uses a decaying average or moving average of the partial derivatives instead of the sum in the calculation of the learning rate for each parameter.

This is achieved by adding a new hyperparameter we will call rho that acts like momentum for the partial derivatives.

RMSProp uses an exponentially decaying average to discard history from the extreme past so that it can converge rapidly after finding a convex bowl, as if it were an instance of the AdaGrad algorithm initialized within that bowl.

The calculation of the mean squared partial derivative for one parameter is as follows:

This process is then repeated for each input variable until a new point in the search space is created and can be evaluated.

RMSProp is a very effective extension of gradient descent and is one of the preferred approaches generally used to fit deep learning neural networks.

Empirically, RMSProp has been shown to be an effective and practical optimization algorithm for deep neural networks. It is currently one of the go-to optimization methods being employed routinely by deep learning practitioners.

Now that we are familiar with the RMSprop algorithm, let’s explore how we might implement it and evaluate its performance.

In this section, we will explore how to implement the gradient descent optimization algorithm with adaptive gradients using the RMSProp algorithm.

Now that we have a test objective function, let’s look at how we might implement the RMSProp optimization algorithm.

We can apply the gradient descent with RMSProp to the test problem.

Next, we can implement gradient descent optimization.

Next, we need to initialize the decay average of the squared partial derivatives for each dimension to 0.0 values.

We can then use the moving average of the squared partial derivatives and gradient to calculate the step size for the next point.

We will do this one variable at a time, first calculating the step size for the variable, then the new value for the variable. These values are built up in an array until we have a completely new solution that is in the steepest descent direction from the current point using the custom step sizes.

We can tie all of this together into a function named rmsprop() that takes the names of the objective function and the derivative function, an array with the bounds of the domain and hyperparameter values for the total number of algorithm iterations and the initial learning rate, and returns the final solution and its evaluation.

Note: we have intentionally used lists and imperative coding style instead of vectorized operations for readability. Feel free to adapt the implementation to a vectorization implementation with NumPy arrays for better performance.

We can then define our hyperparameters and call the rmsprop() function to optimize our test objective function.

In this case, we will use 50 iterations of the algorithm, an initial learning rate of 0.01, and a value of 0.99 for the rho hyperparameter, all chosen after a little trial and error.

Tying all of this together, the complete example of gradient descent optimization with RMSProp is listed below.

Running the example applies the RMSProp optimization algorithm to our test problem and reports the performance of the search for each iteration of the algorithm.

In this case, we can see that a near optimal solution was found after perhaps 33 iterations of the search, with input values near 0.0 and 0.0, evaluating to 0.0.

We can plot the progress of the search on a contour plot of the domain.

We must update the rmsprop() function to maintain a list of all solutions found during the search, then return this list at the end of the search.

Tying this all together, the complete example of performing the RMSProp optimization on the test problem and plotting the results on a contour plot is listed below. 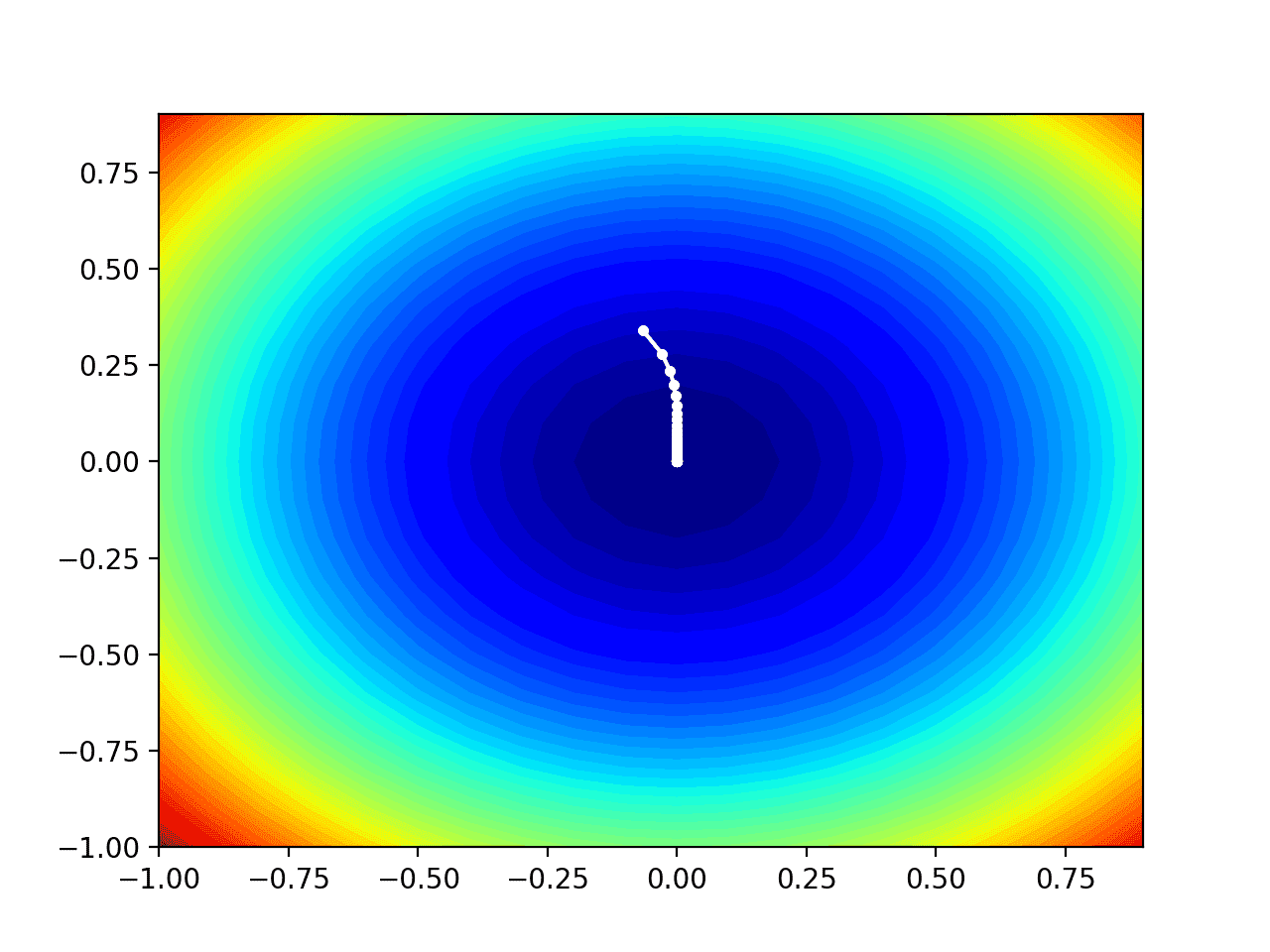 In this tutorial, you discovered how to develop gradient descent with RMSProp optimization algorithm from scratch.

7 Responses to Gradient Descent With RMSProp from Scratch