By Jason Brownlee on September 4, 2019 in Probability

It is common in statistics and machine learning to create a linear transform or mapping of a variable.

An example is a linear scaling of a feature variable. We have the natural intuition that the mean of the scaled values is the same as the scaled value of the mean raw variable values. This makes sense.

Unfortunately, we bring this intuition with us when using nonlinear transformations of variables where this relationship no longer holds. Fixing this intuition involves the discovery of Jensen’s Inequality, which provides a standard mathematical tool used in function analysis, probability, and statistics.

In this tutorial, you will discover Jensen’s Inequality. 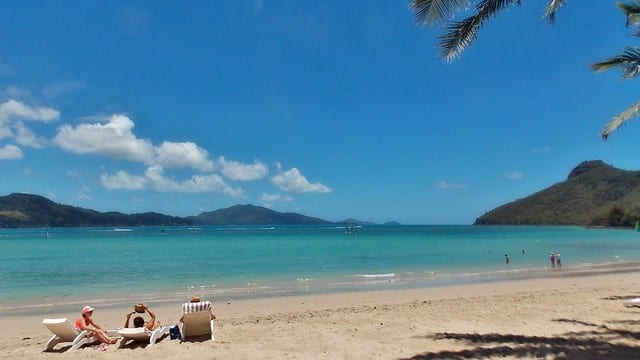 A Gentle Introduction to Jensen’s Inequality
Photo by gérard, some rights reserved.

For example, we may multiply a set of observations by a constant fraction in order to scale them.

We may then work and think about the observations both in terms of their real values and in their transformed values. This might include the calculation of summary statistics, such as the sum or the mean.

We can state it succinctly with x for our observations, f() for our transform function, and mean() for calculating the mean; this would be:

Our intuition here is true and we can demonstrate it with a small example.

Consider the case of a simple game where we roll a fair die and get a number between 1 and 6. We may have a payoff for each roll as a fraction 0.5 of the dice roll.

We can define our payoff function as follows:

Next, we can then define the range of possible dice rolls and the transform of each value:

Finally, we can compare the payoff of the mean dice roll, e.g. the transform of the average observation.

We expect both of these calculated values to be the same, always.

The problem is that this intuition does not hold when the transform function is nonlinear.

Nonlinear functions refer to the relationship between the input and output that does not form a straight line.

For example, a transform that squares the input or f(x) == x^2 is an quadratic convex function. This is because as x increases, the output of the transform function f() increases as the square of the input.

This mathematical rule was first described by Johan Jensen and is known generally as Jensen’s Inequality.

Naturally, if the transform function is concave, the greater-than sign (>) becomes less-than (<), as follows:

This is not intuitive at first and has interesting implications.

Developing an Intuition for Jensen’s Inequality

We can try to make Jensen’s Inequality intuition with a worked example.

Our example of dice rolls and the linear payoff function can be updated to have a nonlinear payoff.

In this case, we can use the x^2 convex function to payoff the outcome of each dice roll. For example, the dice roll outcome of three would have the payoff 3^2 or 9. The updated payoff() function is listed below.

We can calculate the payoff for each dice roll and plot the results as a line plot of outcome vs. payoff.

This will give us an intuition for the nonlinear or convex nature of the payoff function over all possible outcomes.

Running the example calculates the payoff for each dice roll and plots the dice roll outcomes vs. the payoff.

The plot shows the convex shape of the payoff function over all possible outcomes. 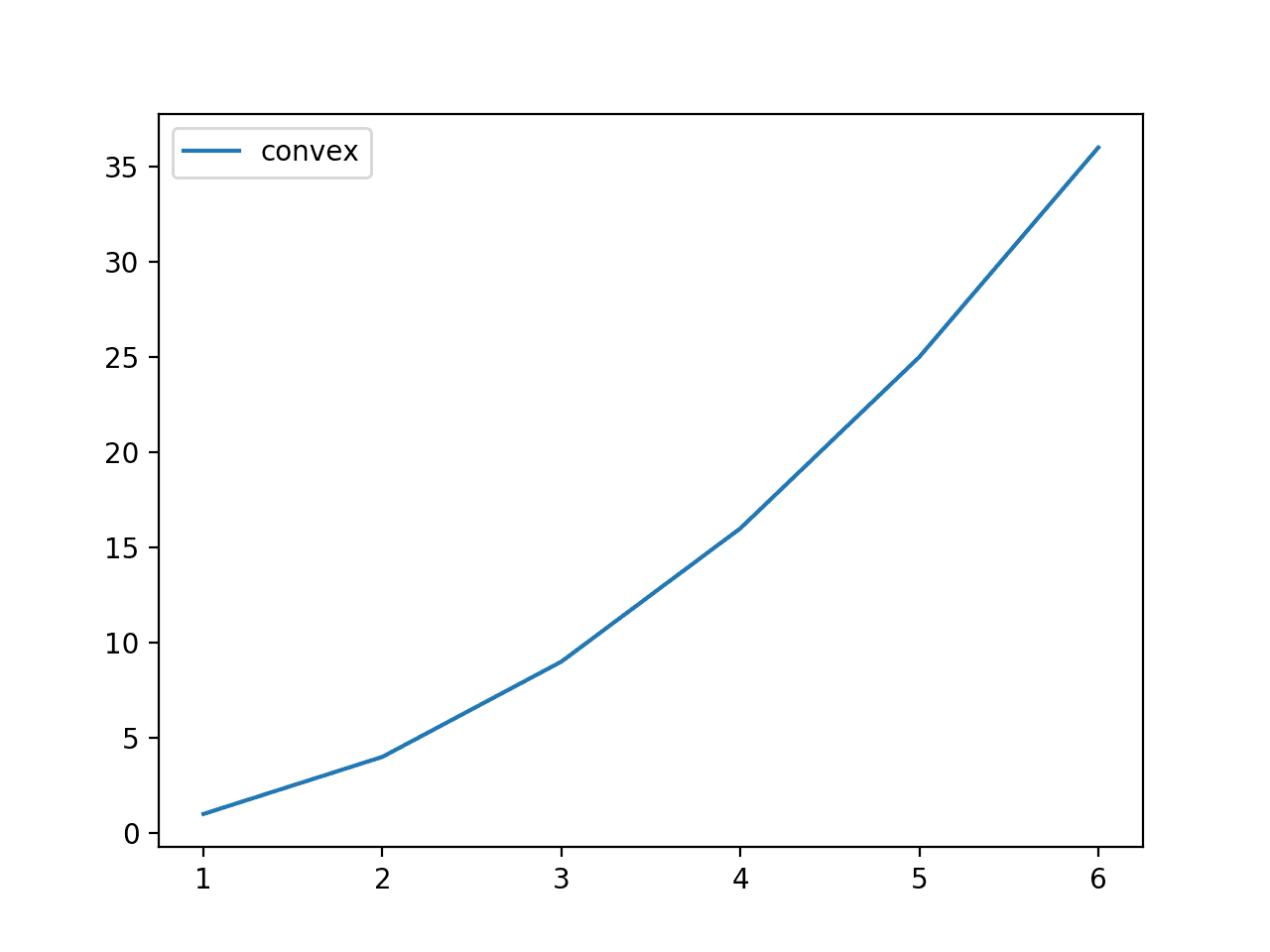 Jensen’s Inequality suggests that the mean of the payoffs will always be larger than or equal to the payoff of the mean outcome.

To confirm that our intuition is wrong, let’s compare these two values over all possible outcomes.

Running the example, we can see that our intuition for the payoff for the mean outcome is correct; the value is 12.25, as we expected.

We can see that the intuition breaks down and that the mean payoff value is slightly higher than 12.25.

Recall that the mean (arithmetic mean) is really just a sum of the values, normalized by the number of values. Now consider that we are summing over much larger values in the case if the payoffs, specifically [1, 4, 9, 16, 25, 36], which sums to 91. This pulls our mean higher.

The intuition is that because the function is convex, the transformed values are always going to be larger than the raw outcome values, on average, or any other sum type operation we want to use.

There is one more step that might help with the intuition, and that is the idea of sampling.

We have looked at an example of calculating the payoff for all possible outcomes, but this is unusual. Instead, we are more likely to sample a number of outcomes from a domain and calculate the payoff for each.

We can implement this by rolling the dice many times, e.g. 50, and calculate the payoff for each outcome, then compare the mean payoff to the payoff of the mean outcome.

The randomness allows many repeated outcomes and an important distribution of each outcome, therefore the mean of the payoffs and the payoff of the means will vary each repetition of this experiment. We will repeat the experiment 10 times. Each repetition, we expect the inequality to hold.

Running the example, we can see that the two mean values move around a fair bit across the trials.

Note: your specific results will vary given the stochastic nature of the experiment.

Now that we have some intuition for Jensen’s Inequality, let’s look at some cases where it is used.

A common application of Jensen’s Inequality is in the comparison of arithmetic mean (AM) and geometric mean (GM).

When the sample observations have different scales, e.g. refer to different things, then the geometric mean is used.

The nth root can also be calculated using the 1/n exponent, making the notation and calculation simpler. Therefore, our geometric mean can be calculated as:

For more on the difference between the arithmetic and geometric mean, see:

At first glance, it might not be obvious how these two functions are related, but in fact, the arithmetic mean also uses the nth root payoff function with n=1, which has no effect.

Recall that the nth root and logarithms are inverse functions of each other. We can establish their relationship more clearly if we first use the inverse of the nth root or log as the payoff function f().

In the case of the geometric mean, or GM, we are calculating the mean of the log outcome:

In the case of the arithmetic means or AM, we are calculating the log of the mean outcome.

The log function is concave, therefore given our knowledge of Jensen’s Inequality, we know that:

We can make this clear with a small worked example with our game of dice rolls in [1-6] and a log payoff function.

Running the example confirms our expectation that the log arithmetic mean is greater than the log geometric mean.

A line plot of all possible outcomes versus the payoffs is also created showing the concave nature of the log() function. 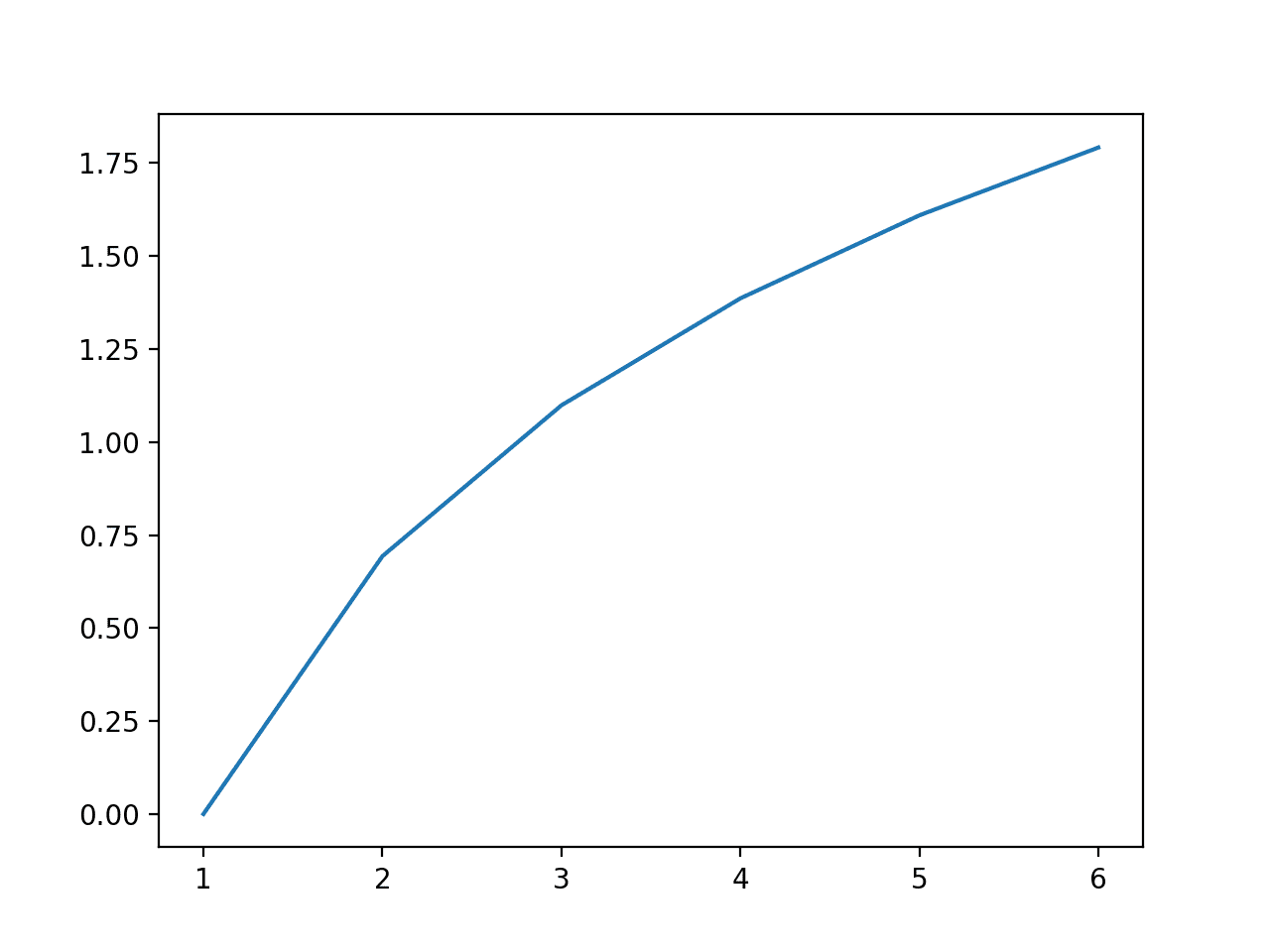 We can now remove the log from both the mean calculations. This can be easily done by using an inverse log function to each side, or the nth root.

Recall that the 6th root can also be calculated via the exponent of 1/6.

The square root function is also concave like the log function, and the Jensen’s Inequality still holds:

This is referred to as the inequality of arithmetic and geometric means, or AM-GM inequality for short.

This inequality is important when working with financial time series, such as calculating the rate of return.

For example, the average rate of return can be calculated over an interval such as monthly over one year. It could be calculated using the arithmetic mean, but this value would be optimistic (a larger value) and would exclude the reinvestment of returns and would assume any losses would be topped up at the start of each period.

Instead, the geometric mean must be used to give the real average rate of return over the interval (a smaller value), correctly taking into account losses with reinvesting and compounding gains.

Jensen’s Inequality is a useful tool in mathematics, specifically in applied fields such as probability and statistics.

For example, it is often used as a tool in mathematical proofs.

It is also used to make claims about a function where little is known or needs to be known about the distribution. One example is the use of the inequality in defining the lower bound on the probability of a random variable.

Jensen’s Inequality also provides the mathematical basis for the idea of “antifragility” in Nassim Taleb’s 2012 book titled “Antifragile.” The example of a convex payoff function for dice rolls described above was inspired by a section of this book (Chapter 19).

In this tutorial, you discovered Jensen’s Inequality in mathematics and statistics.

Jason Brownlee, PhD is a machine learning specialist who teaches developers how to get results with modern machine learning methods via hands-on tutorials.
View all posts by Jason Brownlee →
A Gentle Introduction to Generative Adversarial Network Loss Functions
How to Develop and Evaluate Naive Classifier Strategies Using Probability

6 Responses to A Gentle Introduction to Jensen’s Inequality