By Jason Brownlee on January 15, 2021 in Optimization

Function optimization involves finding the input that results in the optimal value from an objective function.

Optimization algorithms navigate the search space of input variables in order to locate the optima, and both the shape of the objective function and behavior of the algorithm in the search space are opaque on real-world problems.

In this tutorial, you will discover how to create visualizations for function optimization in Python. 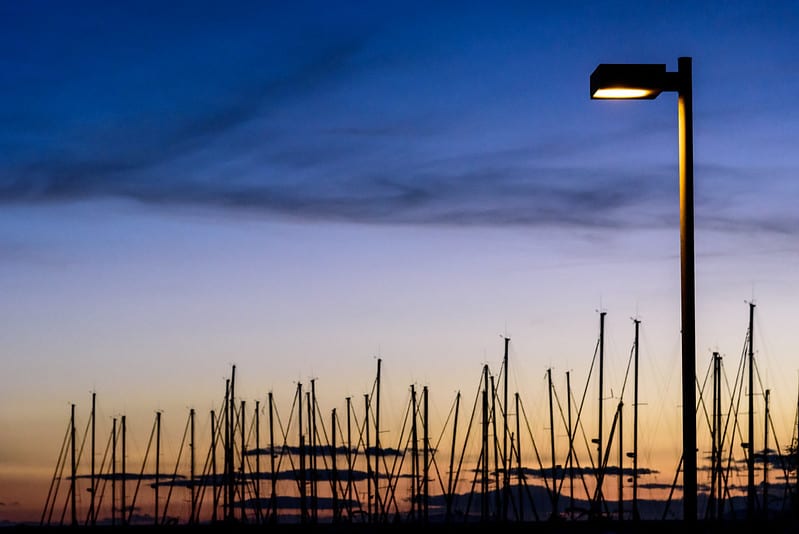 Visualization for Function Optimization in Python
Photo by Nathalie, some rights reserved.

Function optimization is a field of mathematics concerned with finding the inputs to a function that result in the optimal output for the function, typically a minimum or maximum value.

Optimization may be straightforward for simple differential functions where the solution can be calculated analytically. However, most functions we’re interested in solving in applied machine learning may or may not be well behaved and may be complex, nonlinear, multivariate, and non-differentiable.

As such, it is important to have an understanding of a wide range of different algorithms that can be used to address function optimization problems.

Visualization plays an important role when getting started with function optimization.

Typically, one-dimensional or two-dimensional functions are chosen to study optimization algorithms as they are easy to visualize using standard plots, like line plots and surface plots. We will explore both in this tutorial.

First, let’s explore how we might visualize a one-dimensional function optimization.

Input variables are typically continuous, represented by a real-valued floating-point value. Often, the input domain is unconstrained, although for test problems we impose a domain of interest.

In this case we will explore function visualization with a simple x^2 objective function:

The example below implements this objective function and evaluates a single input.

Running the example evaluates the value 4.0 with the objective function, which equals 16.0.

The first thing we might want to do with a new function is define an input range of interest and sample the domain of interest using a uniform grid.

This sample will provide the basis for generating a plot later.

We can then evaluate each of the x values in our sample.

Finally, we can check some of the input and their corresponding outputs.

Tying this together, the complete example of sampling the input space and evaluating all points in the sample is listed below.

Running the example first generates a uniform sample of input points as we expected.

Now that we have some confidence in generating a sample of inputs and evaluating them with the objective function, we can look at generating plots of the function.

We could sample the input space randomly, but the benefit of a uniform line or grid of points is that it can be used to generate a smooth plot.

It is smooth because the points in the input space are ordered from smallest to largest. This ordering is important as we expect (hope) that the output of the objective function has a similar smooth relationship between values, e.g. small changes in input result in locally consistent (smooth) changes in the output of the function.

Running the example creates a line plot of the objective function.

We can see that the function has a large U-shape, called a parabola. This is a common shape when studying curves, e.g. the study of calculus. 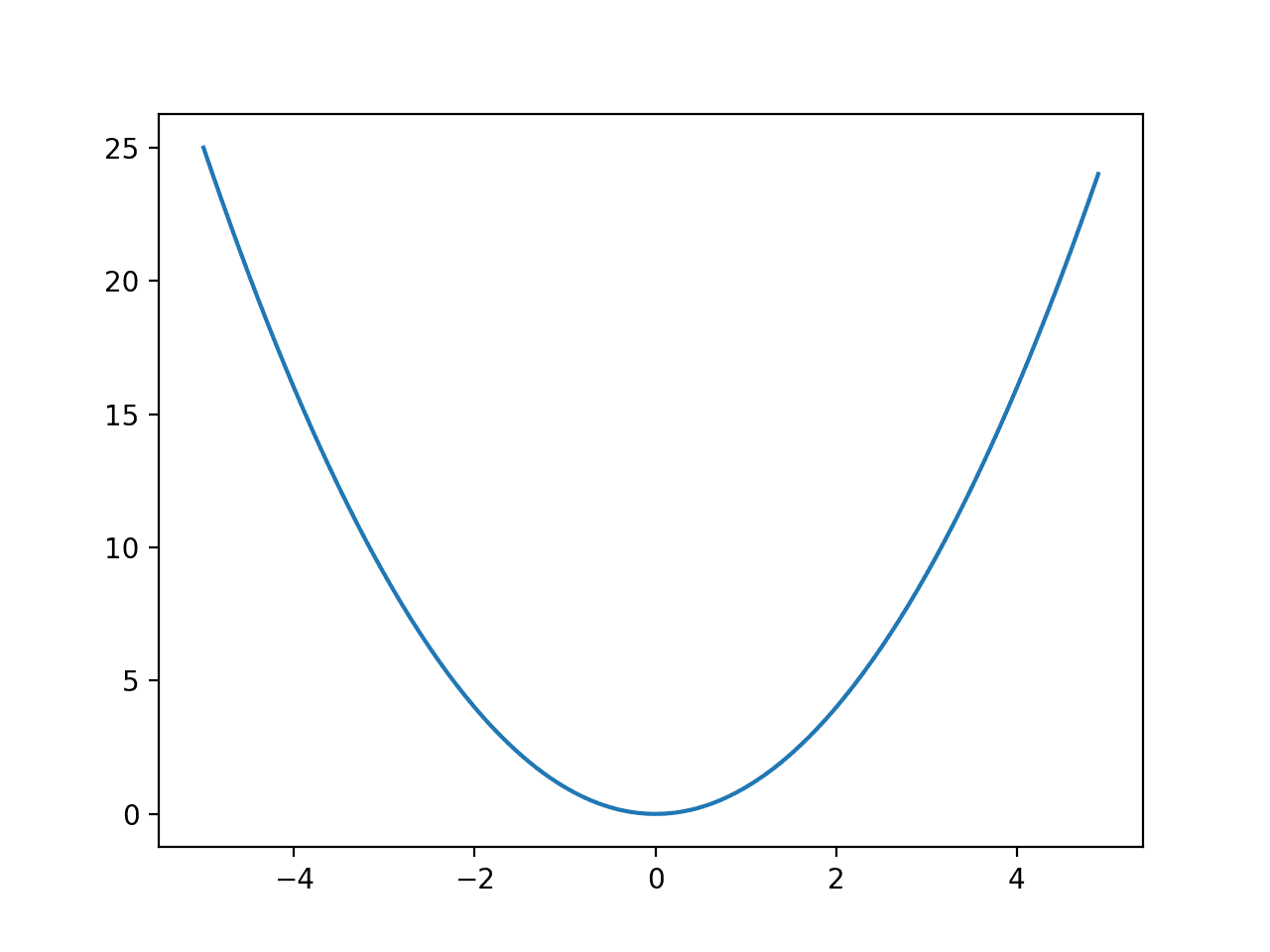 Line Plot of a One-Dimensional Function

The line is a construct. It is not really the function, just a smooth summary of the function. Always keep this in mind.

Recall that we, in fact, generated a sample of points in the input space and corresponding evaluation of those points.

As such, it would be more accurate to create a scatter plot of points; for example:

Running the example creates a scatter plot of the objective function.

We can see the familiar shape of the function, but we don’t gain anything from plotting the points directly.

The line and the smooth interpolation between the points it provides are more useful as we can draw other points on top of the line, such as the location of the optima or the points sampled by an optimization algorithm. 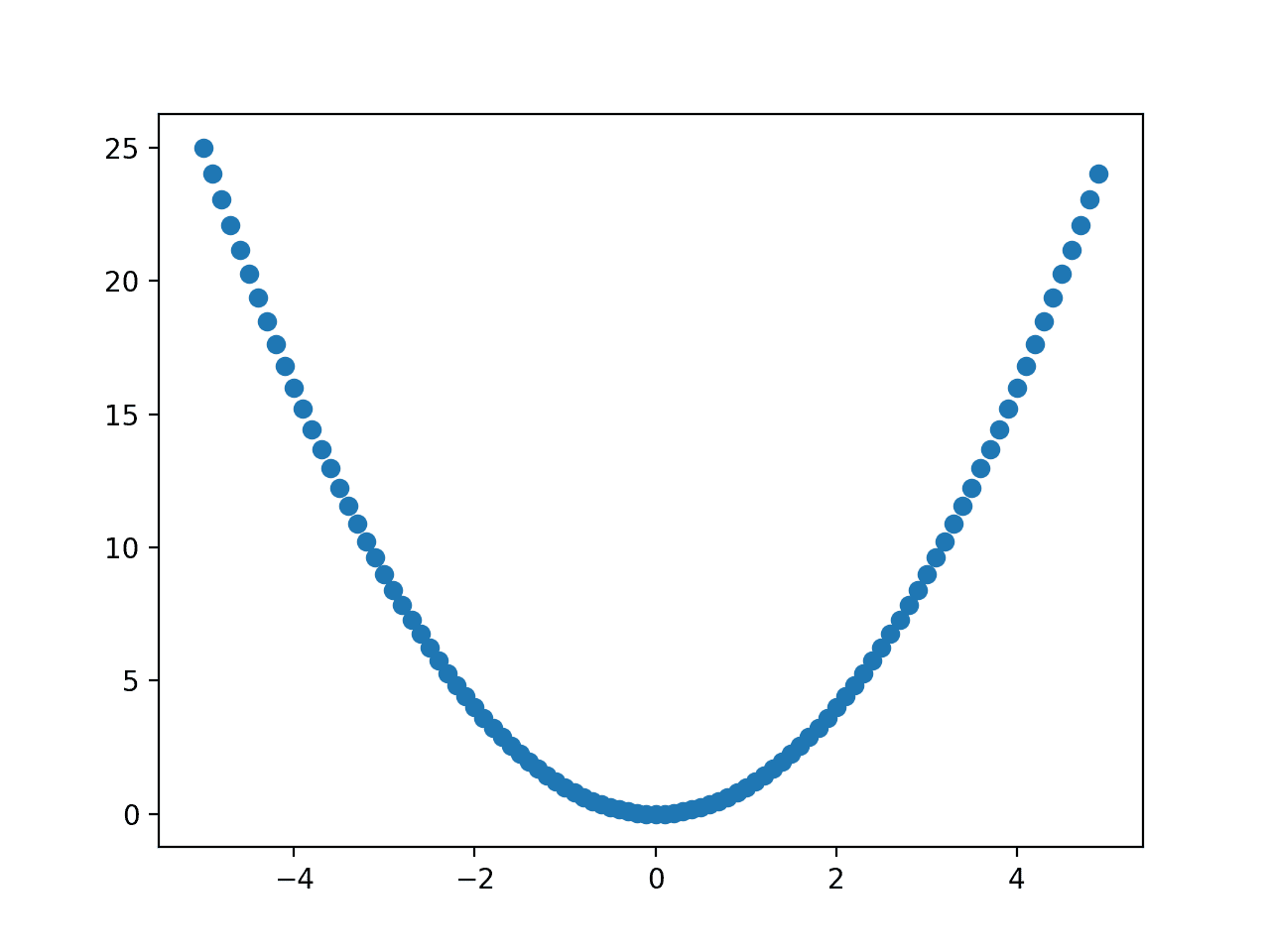 Scatter Plot of a One-Dimensional Function

Next, let’s draw the line plot again and this time draw a point where the known optima of the function is located.

First, we must define the input for the optima, then evaluate that point to give the x-axis and y-axis values for plotting.

We can then plot this point with any shape or color we like, in this case, a red square.

Tying this together, the complete example of creating a line plot of the function with the optima highlighted by a point is listed below. 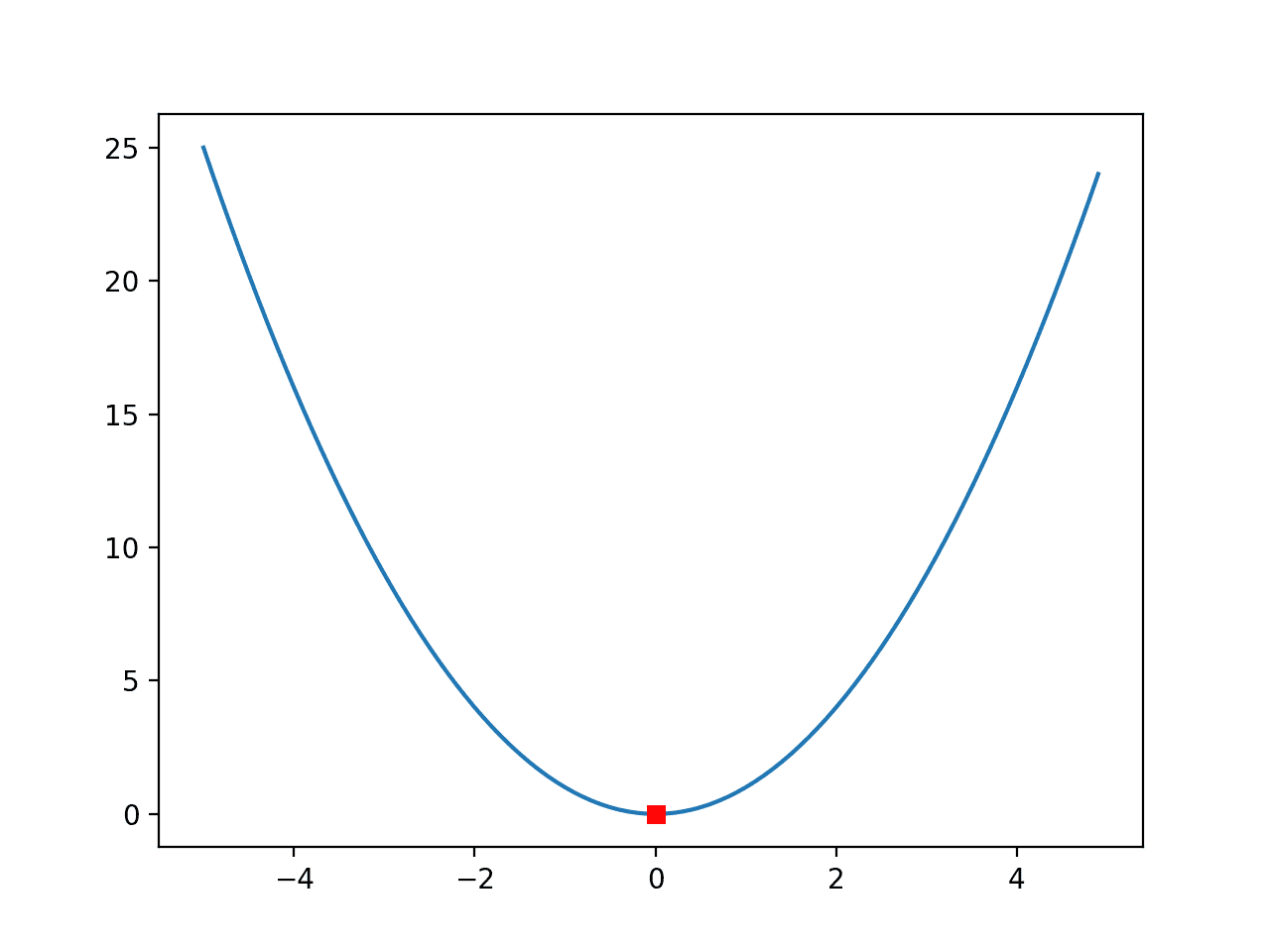 This is a very simple function and the red square for the optima is easy to see.

Sometimes the function might be more complex, with lots of hills and valleys, and we might want to make the optima more visible.

In this case, we can draw a vertical line across the whole plot.

Running the example creates the same plot and this time draws a red line clearly marking the point in the input space that marks the optima. 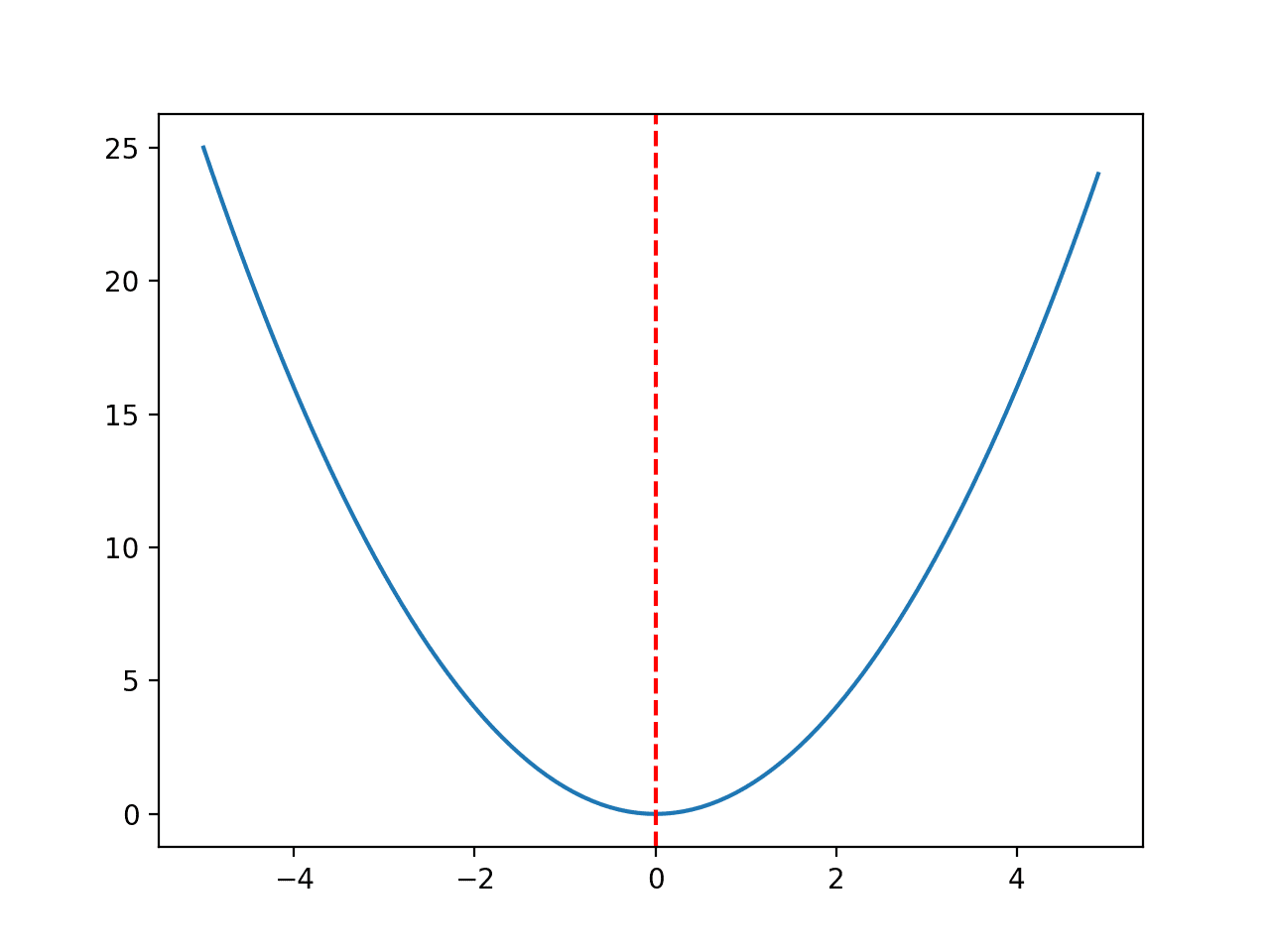 Finally, we might want to draw the samples of the input space selected by an optimization algorithm.

We will simulate these samples with random points drawn from the input domain.

We can then plot this sample, in this case using small black circles.

The complete example of creating a line plot of a function with the optima marked by a red line and an algorithm sample drawn with small black dots is listed below.

Running the example creates the line plot of the domain and marks the optima with a red line as before.

This time, the sample from the domain selected by an algorithm (really a random sample of points) is drawn with black dots.

We can imagine that a real optimization algorithm will show points narrowing in on the domain as it searches down-hill from a starting point. 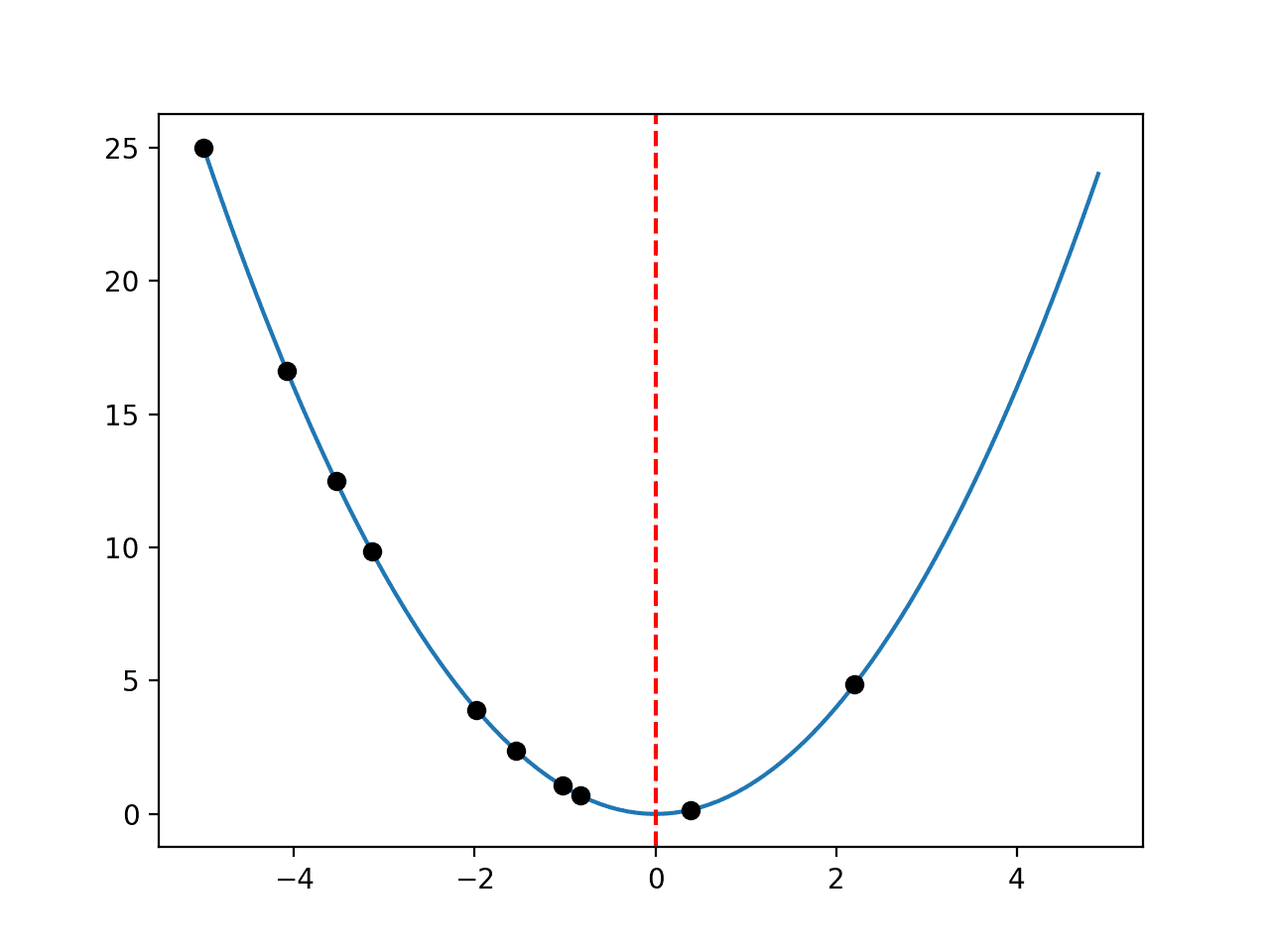 Next, let’s look at how we might perform similar visualizations for the optimization of a two-dimensional function.

A two-dimensional function is a function that takes two input variables, e.g. x and y.

We can use the same x^2 function and scale it up to be a two-dimensional function; for example:

The example below implements this objective function and evaluates a single input.

Next, we need a way to sample the domain so that we can, in turn, sample the objective function.

A common way for sampling a two-dimensional function is to first generate a uniform sample along each variable, x and y, then use these two uniform samples to create a grid of samples, called a mesh grid.

This can be achieved using the meshgrid() NumPy function; for example:

We can then evaluate each pair of points using our objective function.

Finally, we can review the mapping of some of the inputs to their corresponding output values.

The example below demonstrates how we can create a uniform sample grid across the two-dimensional input space and objective function.

Running the example first summarizes some points in the mesh grid, then the objective function evaluation for some points.

Finally, we enumerate coordinates in the two-dimensional input space and their corresponding function evaluation.

Now that we are familiar with how to sample the input space and evaluate points, let’s look at how we might plot the function.

A popular plot for two-dimensional functions is a contour plot.

This is just like a contour map of a landscape where mountains can be distinguished from valleys.

Tying this together, the complete example of creating a contour plot of the two-dimensional objective function is listed below.

We can see that the lowest part of the domain is the middle, as expected. 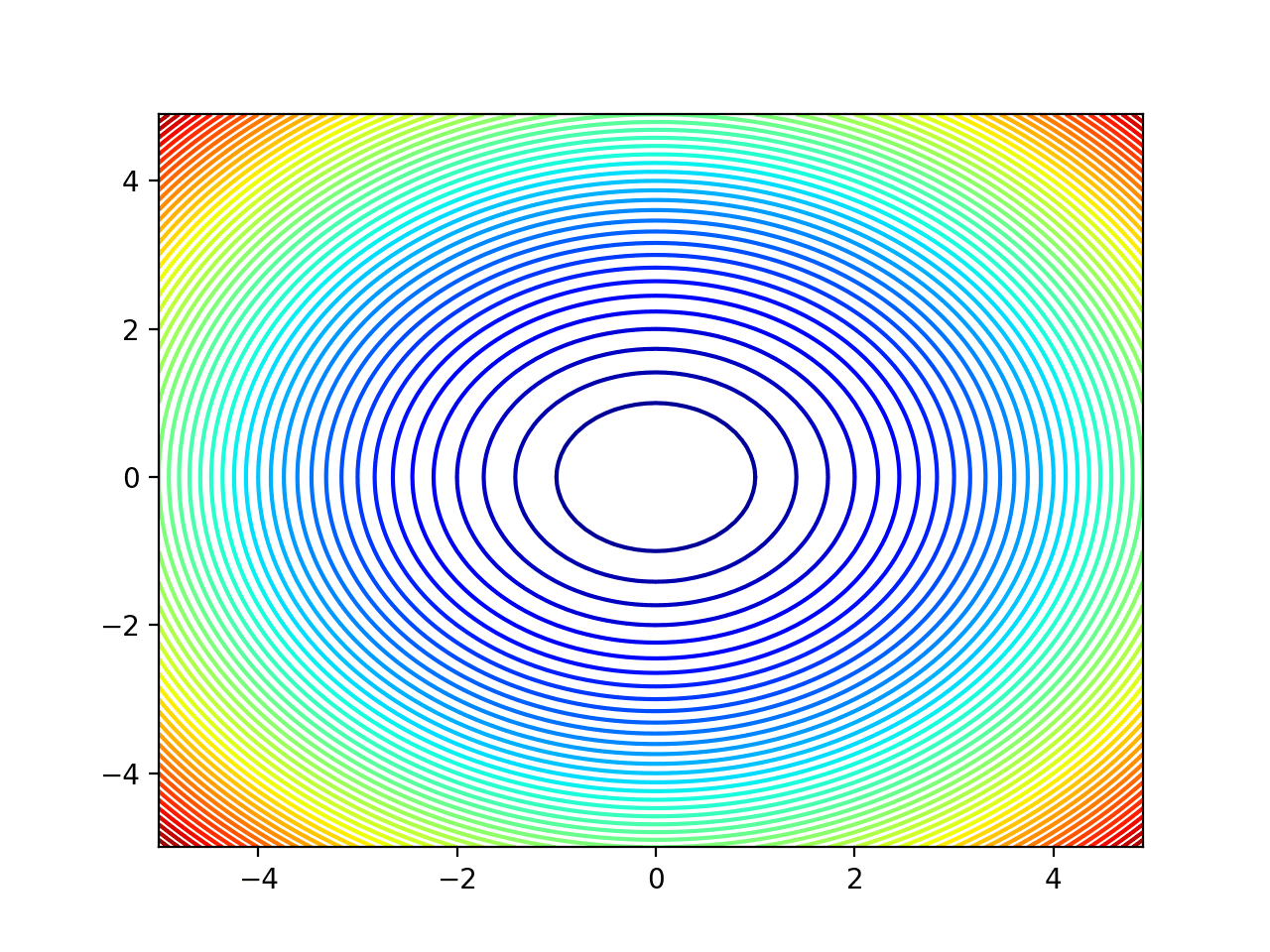 It is also helpful to color the plot between the contours to show a more complete surface.

Again, the colors are just a simple linear interpolation, not the true function evaluation. This must be kept in mind on more complex functions where fine detail will not be shown.

We can fill the contour plot using the contourf() version of the function that takes the same arguments.

We can also show the optima on the plot, in this case as a white star that will stand out against the blue background color of the lowest part of the plot.

Tying this together, the complete example of a filled contour plot with the optima marked is listed below.

Running the example creates the filled contour plot that gives a better idea of the shape of the objective function. 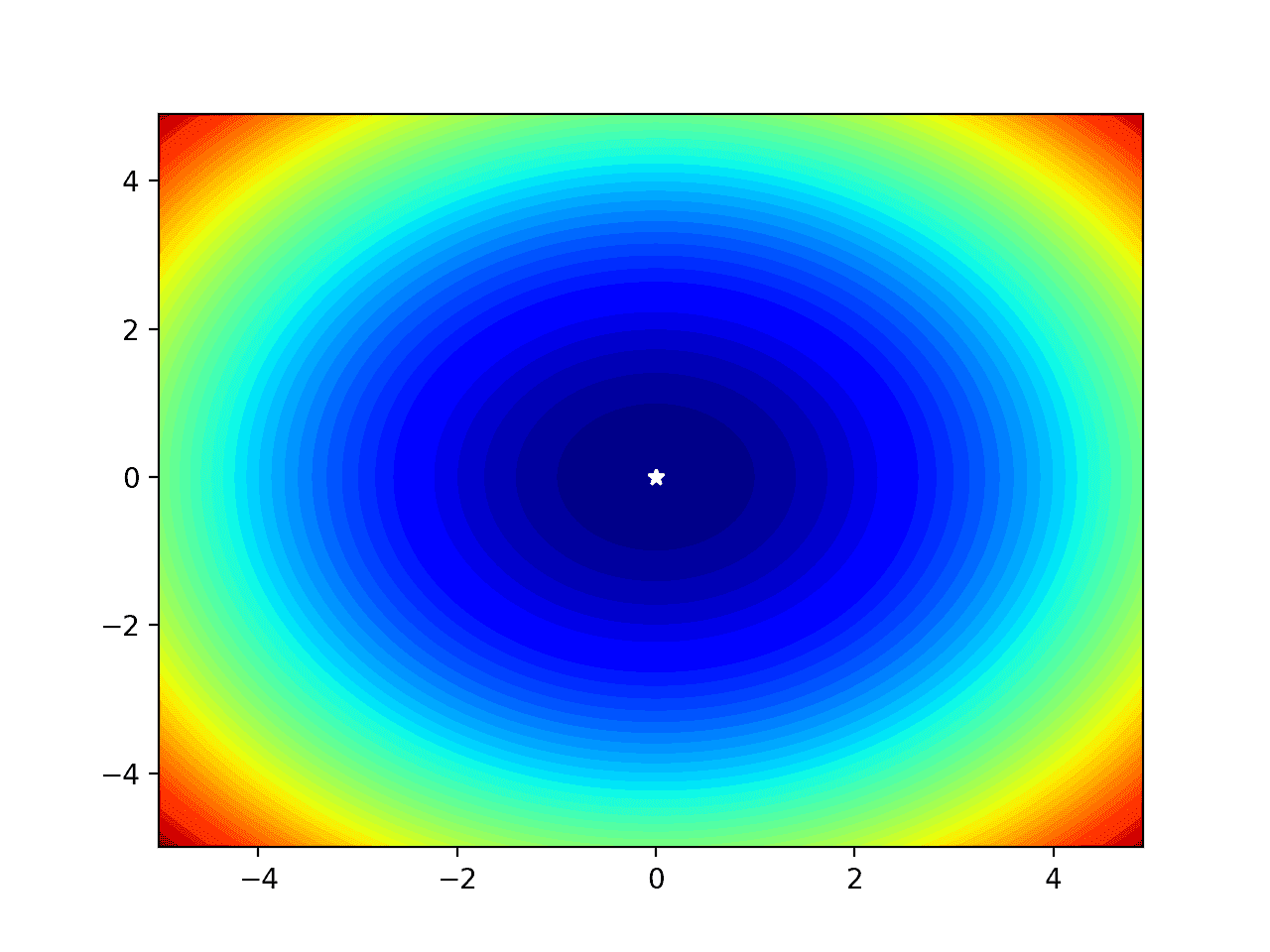 We may want to show the progress of an optimization algorithm to get an idea of its behavior in the context of the shape of the objective function.

In this case, we can simulate the points chosen by an optimization algorithm with random coordinates in the input space.

These points can then be plotted directly as black circles and their context color can give an idea of their relative quality.

Tying this together, the complete example of a filled contour plot with optimal and input sample plotted is listed below.

Running the example, we can see the filled contour plot as before with the optima marked.

We can now see the sample drawn as black dots and their surrounding color and relative distance to the optima gives an idea of how close the algorithm (random points in this case) got to solving the problem. 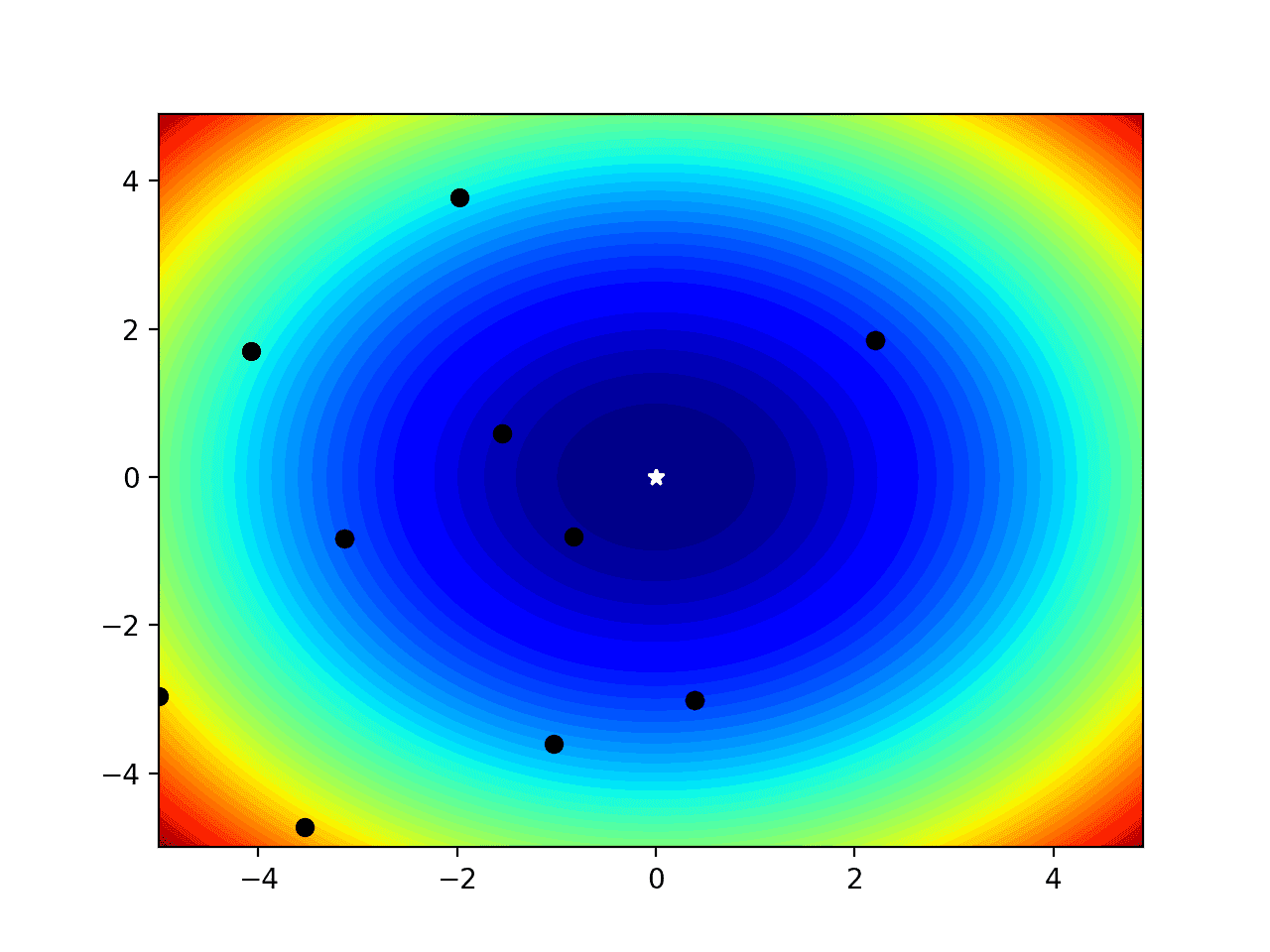 Finally, we may want to create a three-dimensional plot of the objective function to get a fuller idea of the curvature of the function.

This can be achieved using the plot_surface() Matplotlib function, that, like the contour plot, takes the mesh grid and function evaluation directly.

The complete example of creating a surface plot is listed below. 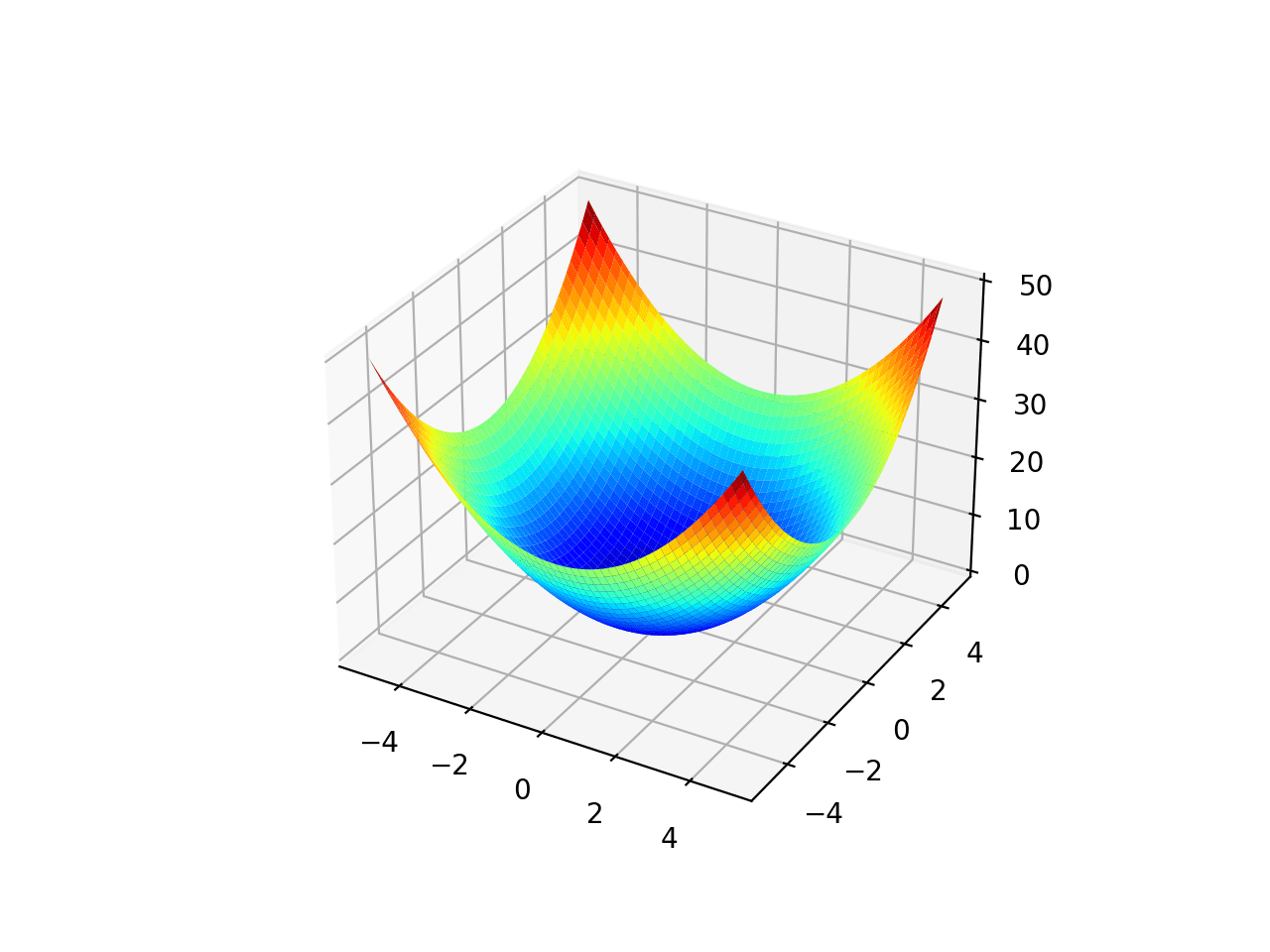 Additionally, the plot is interactive, meaning that you can use the mouse to drag the perspective on the surface around and view it from different angles. 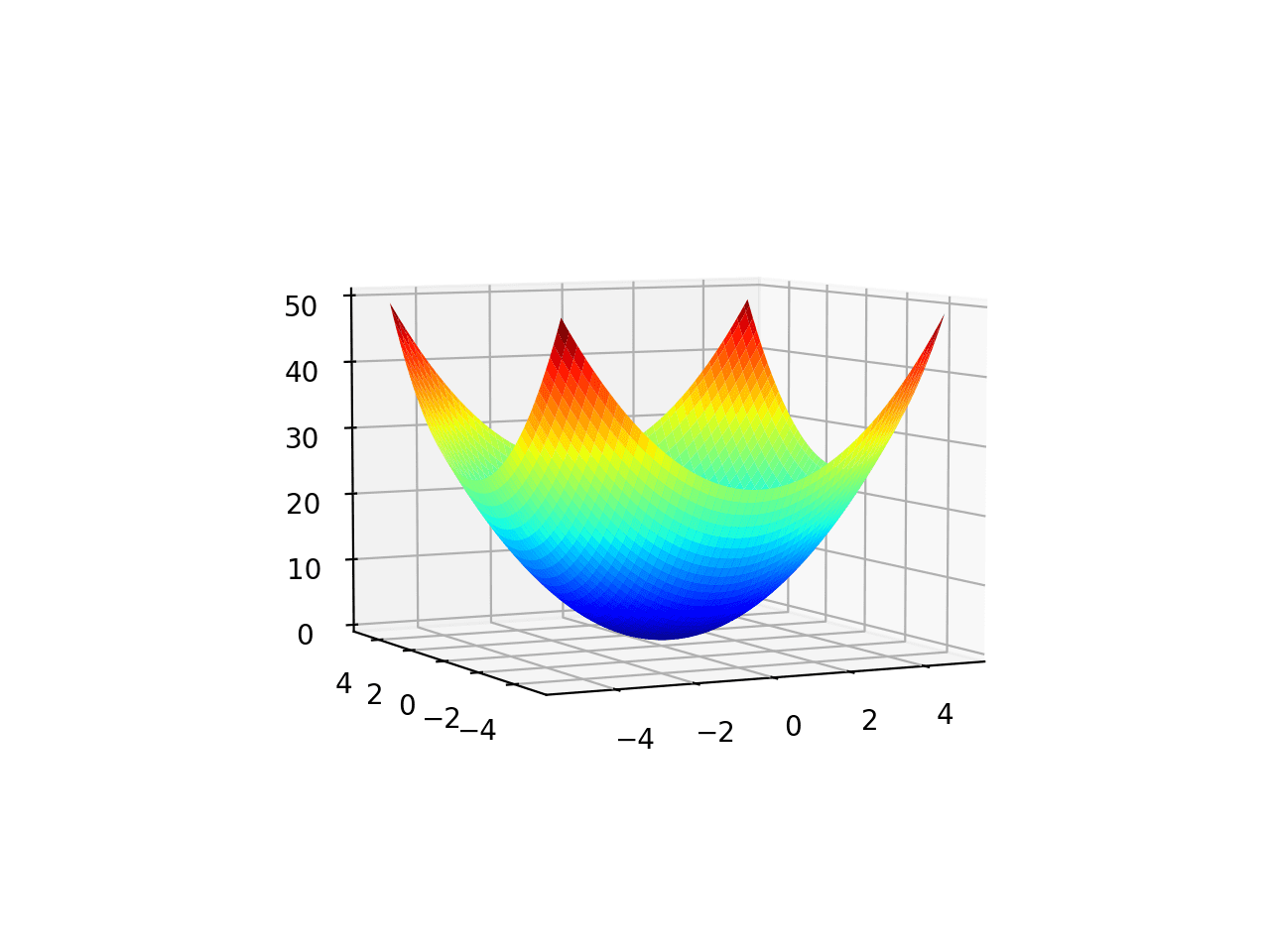 In this tutorial, you discovered how to create visualizations for function optimization in Python.

Jason Brownlee, PhD is a machine learning specialist who teaches developers how to get results with modern machine learning methods via hands-on tutorials.
View all posts by Jason Brownlee →
Code Adam Optimization Algorithm From Scratch
How to Choose an Activation Function for Deep Learning

5 Responses to Visualization for Function Optimization in Python

How to Use Nelder-Mead Optimization in Python

The Optimization for Maching Learning EBook
is where you'll find the Really Good stuff.