By Jason Brownlee on July 9, 2018 in Statistics

Correlation is a measure of the association between two variables.

It is easy to calculate and interpret when both variables have a well understood Gaussian distribution. When we do not know the distribution of the variables, we must use nonparametric rank correlation methods.

In this tutorial, you will discover rank correlation methods for quantifying the association between variables with a non-Gaussian distribution.

Correlation refers to the association between the observed values of two variables.

See the table below to help with interpretation the correlation coefficient.

Table of Correlation Coefficient Values and Their Interpretation
Taken from “Nonparametric Statistics for Non-Statisticians: A Step-by-Step Approach”.

Rank correlation refers to methods that quantify the association between variables using the ordinal relationship between the values rather than the specific values. Ordinal data is data that has label values and has an order or rank relationship; for example: ‘low‘, ‘medium‘, and ‘high‘.

In the following sections, we will take a closer look at two of the more common rank correlation methods: Spearman’s and Kendall’s.

Before we demonstrate rank correlation methods, we must first define a test problem.

Running the example generates the data sample and graphs the points on a scatter plot.

We can clearly see that each variable has a uniform distribution and the positive association between the variables is visible by the diagonal grouping of the points from the bottom left to the top right of the plot. 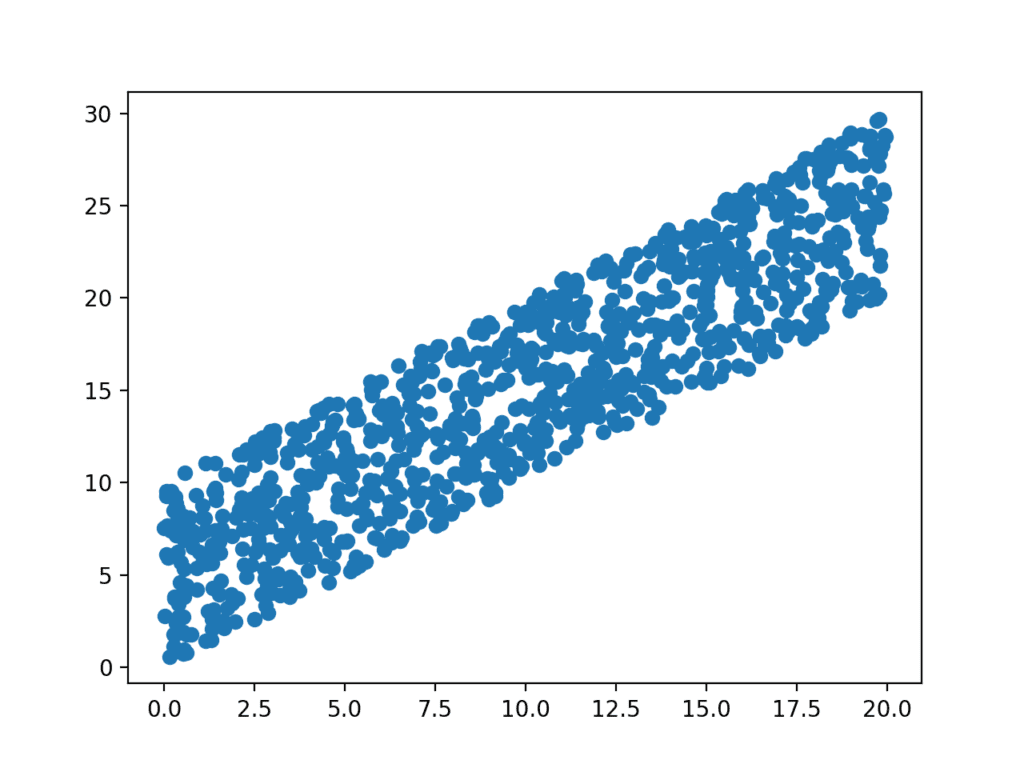 Scatter Plot of Associated Variables Drawn From a Uniform Distribution

It may also be called Spearman’s correlation coefficient and is denoted by the lowercase greek letter rho (p). As such, it may be referred to as Spearman’s rho.

This statistical method quantifies the degree to which ranked variables are associated by a monotonic function, meaning an increasing or decreasing relationship. As a statistical hypothesis test, the method assumes that the samples are uncorrelated (fail to reject H0).

The Spearman rank-order correlation is a statistical procedure that is designed to measure the relationship between two variables on an ordinal scale of measurement.

Spearman’s rank correlation can be calculated in Python using the spearmanr() SciPy function.

The function takes two real-valued samples as arguments and returns both the correlation coefficient in the range between -1 and 1 and the p-value for interpreting the significance of the coefficient.

We can demonstrate the Spearman’s rank correlation on the test dataset. We know that there is a strong association between the variables in the dataset and we would expect the Spearman’s test to find this association.

Running the example calculates the Spearman’s correlation coefficient between the two variables in the test dataset.

The intuition for the test is that it calculates a normalized score for the number of matching or concordant rankings between the two samples. As such, the test is also referred to as Kendall’s concordance test.

We can demonstrate the calculation on the test dataset, where we do expect a significant positive association to be reported.

Running the example calculates the Kendall’s correlation coefficient as 0.7, which is highly correlated.

The p-value is close to zero (and printed as zero), as with the Spearman’s test, meaning that we can confidently reject the null hypothesis that the samples are uncorrelated.

In this tutorial, you discovered rank correlation methods for quantifying the association between variables with a non-Gaussian distribution.

Jason Brownlee, PhD is a machine learning specialist who teaches developers how to get results with modern machine learning methods via hands-on tutorials.
View all posts by Jason Brownlee →
Statistics in Plain English for Machine Learning
A Gentle Introduction to Effect Size Measures in Python

37 Responses to How to Calculate Nonparametric Rank Correlation in Python