By Jason Brownlee on September 2, 2015 in Machine Learning Resources

It is a type of learning that is perhaps slower than other types of learning, but fuller in that all of the micro decisions involved become intimate. The implementation is owned from head to tail.

In this post we take a close look at Joel Grus popular book “Data Science from Scratch: First Principles with Python“.

I recently finished reading the paperback version and I think it might be one of my favorite beginner machine learning books for the year. Grab a copy! 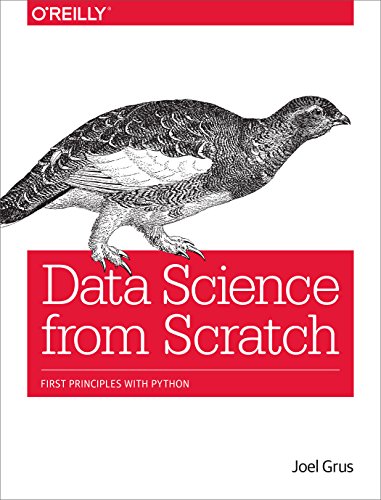 Overview of the Book

Let’s take a birds eye look at this book.

The author of this book is Joel Grus, a software engineer at Google.

In previous roles he’s been a Data Scientist and Analyst at startups and engineer at Google. He got his PhD from Caltech. A very fine background.

Learn more about Joel on his LinkedIn profile and blog and Twitter.

The target audience for the book is intermediate programmers interested in getting started in data science and machine learning.

Python is not a prerequisite to read this book (there is a Python crash course in Chapter 2), but it would speed things up if you were already a Python programmer.

The book does not assume any mathematical background in machine learning (there is a crash course in Chapters 4-7), but again, some background in stats, probability and algebra would speed things along.

This is an introductory book to data science and machine learning.

The majority of the text focuses on the implementation of machine learning algorithms. There is a brief introduction to Python and the coverage of some basic math, data visualization and data gathering subjects.

It will take you from an a beginner programmer to being able to implement machine learning algorithms to address various data science problems.

The approach taken in the book is to describe the concepts and then to implement them in Python from scratch. This means without the use of machine learning and data handling libraries (e.g. scikit-learn).

The stated goal by the author of implementing algorithms from scratch is:

…building tools and implemented algorithms by hand in order to better understand them.

Good code examples must be readable first and efficient and effective second. They are written for understandability as a teaching aid, not production level code. Take note that the programming you will be doing from scratch will be instructional only, not operationalizable.

I put a lot of thought into creating implementations and examples that are clear, well commented, and readable. In most case, the tools we build will be illuminating but impractical.

The book is 311 pages long and contains 25 chapters. It’s a classic O’Reilly book and is the perfect form factor to have open in front of you while you bash away at the keyboard implementing the code examples.

In this section we take a look at the table of contents:

a data scientist is someone who extracts insights from messy data

Implementing things “from scratch” is great for understanding how they work. But it’s generally not great for performance …, ease of use, rapid prototyping, or error handling. In practice, you’ll want to use well-designed libraries that solidly implement the fundamentals.

Opinions of the Book

I generally liked the table of contents, except I would make some changes.

I would drop some of the later chapters like NLP, Network Analysis, and so on (Chapters 20-24) and rename the book “Machine Learning Algorithms from Scratch“. It would be a less sexy but a more honest and accurate title.

Data Science is about formulating the questions then gathering the data and building the models to answer them. We don’t really need a data science from scratch book unless it was a bunch of business case studies plus the modeling. From scratch in data science really means the algorithms part.

I’m not upset, in fact I had a great time reading this book, but I could imagine someone expecting systematic processes for formulating and working through business-data problems in addition the modeling feeling a little bit misleading.

I did not implement all of the algorithms from scratch. I read the whole book, studied all of the examples, but I only implemented a few for fun.

I found the code easy to read, commented just enough. I think going vanilla Python (over NumPy) was a good move. It lowered the bar just enough so that all you need is some basic Python syntax and away you go.

I’ve gathered up some additional resources related to the book if you’re interested in diving deeper.

I like the book. I had fun, I think primarily because I have always liked working through programming books and because I’ve written a book just like this myself (i.e. Clever Algorithms).

If you’ve been around the block and you’re hard core into scikit-learn or R right now and not interested in the distraction, this book is probably not for you. But remember, the learning never ends and it can be fun to go over the beginner stuff again and tighten up the screws.

If you know some Python (or you’re a solid dev and want to get into Python) and you want to get intimate with machine learning algorithms by implementing them, then this book is for you.

Did you read Data Science From Scratch? What did you think? Leave a comment.

My name is Jason Brownlee PhD, and I help developers get results with machine learning.
Read more

The EBook Catalog is where I
keep the Really Good stuff.