By Jason Brownlee on January 25, 2021 in Optimization

The Nelder-Mead optimization algorithm is a widely used approach for non-differentiable objective functions.

As such, it is generally referred to as a pattern search algorithm and is used as a local or global search procedure, challenging nonlinear and potentially noisy and multimodal function optimization problems.

In this tutorial, you will discover the Nelder-Mead optimization algorithm.

How to Use the Nelder-Mead Optimization in Python
Photo by Don Graham, some rights reserved.

Nelder-Mead is an optimization algorithm named after the developers of the technique, John Nelder and Roger Mead.

The algorithm was described in their 1965 paper titled “A Simplex Method For Function Minimization” and has become a standard and widely used technique for function optimization.

It is appropriate for one-dimensional or multidimensional functions with numerical inputs.

Nelder-Mead is a pattern search optimization algorithm, which means it does not require or use function gradient information and is appropriate for optimization problems where the gradient of the function is unknown or cannot be reasonably computed.

It is often used for multidimensional nonlinear function optimization problems, although it can get stuck in local optima.

Practical performance of the Nelder–Mead algorithm is often reasonable, though stagnation has been observed to occur at nonoptimal points. Restarting can be used when stagnation is detected.

A starting point must be provided to the algorithm, which may be the endpoint of another global optimization algorithm or a random point drawn from the domain.

Given that the algorithm may get stuck, it may benefit from multiple restarts with different starting points.

The Nelder-Mead simplex method uses a simplex to traverse the space in search of a minimum.

The algorithm works by using a shape structure (called a simplex) composed of n + 1 points (vertices), where n is the number of input dimensions to the function.

For example, on a two-dimensional problem that may be plotted as a surface, the shape structure would be composed of three points represented as a triangle.

The Nelder-Mead method uses a series of rules that dictate how the simplex is updated based on evaluations of the objective function at its vertices.

The points of the shape structure are evaluated and simple rules are used to decide how to move the points of the shape based on their relative evaluation. This includes operations such as “reflection,” “expansion,” “contraction,” and “shrinkage” of the simplex shape on the surface of the objective function.

The search stops when the points converge on an optimum, when a minimum difference between evaluations is observed, or when a maximum number of function evaluations are performed.

Now that we have a high-level idea of how the algorithm works, let’s look at how we might use it in practice.

The Nelder-Mead optimization algorithm can be used in Python via the minimize() function.

This function requires that the “method” argument be set to “nelder-mead” to use the Nelder-Mead algorithm. It takes the objective function to be minimized and an initial point for the search.

The result is an OptimizeResult object that contains information about the result of the optimization accessible via keys.

For example, the “success” boolean indicates whether the search was completed successfully or not, the “message” provides a human-readable message about the success or failure of the search, and the “nfev” key indicates the number of function evaluations that were performed.

Importantly, the “x” key specifies the input values that indicate the optima found by the search, if successful.

We can demonstrate the Nelder-Mead optimization algorithm on a well-behaved function to show that it can quickly and efficiently find the optima without using any derivative information from the function.

We can define the objective() function below.

We will use a random point in the defined domain as a starting point for the search.

The search can then be performed. We use the default maximum number of function evaluations set via the “maxiter” and set to N*200, where N is the number of input variables, which is two in this case, e.g. 400 evaluations.

After the search is finished, we will report the total function evaluations used to find the optima and the success message of the search, which we expect to be positive in this case.

Finally, we will retrieve the input values for located optima, evaluate it using the objective function, and report both in a human-readable manner.

Tying this together, the complete example of using the Nelder-Mead optimization algorithm on a simple convex objective function is listed below.

In this case, we can see that the search was successful, as we expected, and was completed after 88 function evaluations.

We can see that the optima was located with inputs very close to [0,0], which evaluates to the minimum objective value of 0.0.

Now that we have seen how to use the Nelder-Mead optimization algorithm successfully, let’s look at some examples where it does not perform so well.

The Nelder-Mead optimization algorithm works well for a range of challenging nonlinear and non-differentiable objective functions.

Nevertheless, it can get stuck on multimodal optimization problems and noisy problems.

To make this concrete, let’s look at an example of each.

A noisy objective function is a function that gives different answers each time the same input is evaluated.

We can make an objective function artificially noisy by adding small Gaussian random numbers to the inputs prior to their evaluation.

For example, we can define a one-dimensional version of the x^2 function and use the randn() function to add small Gaussian random numbers to the input with a mean of 0.0 and a standard deviation of 0.3.

The noise will make the function challenging to optimize for the algorithm and it will very likely not locate the optima at x=0.0.

The complete example of using Nelder-Mead to optimize the noisy objective function is listed below.

In this case, the algorithm does not converge and instead uses the maximum number of function evaluations, which is 200.

The algorithm may converge on some runs of the code but will arrive on a point away from the optima.

Many nonlinear objective functions may have multiple optima, referred to as multimodal problems.

The Ackley function is an example of the latter. It is a two-dimensional objective function that has a global optima at [0,0] but has many local optima.

The example below implements the Ackley and creates a three-dimensional plot showing the global optima and multiple local optima. 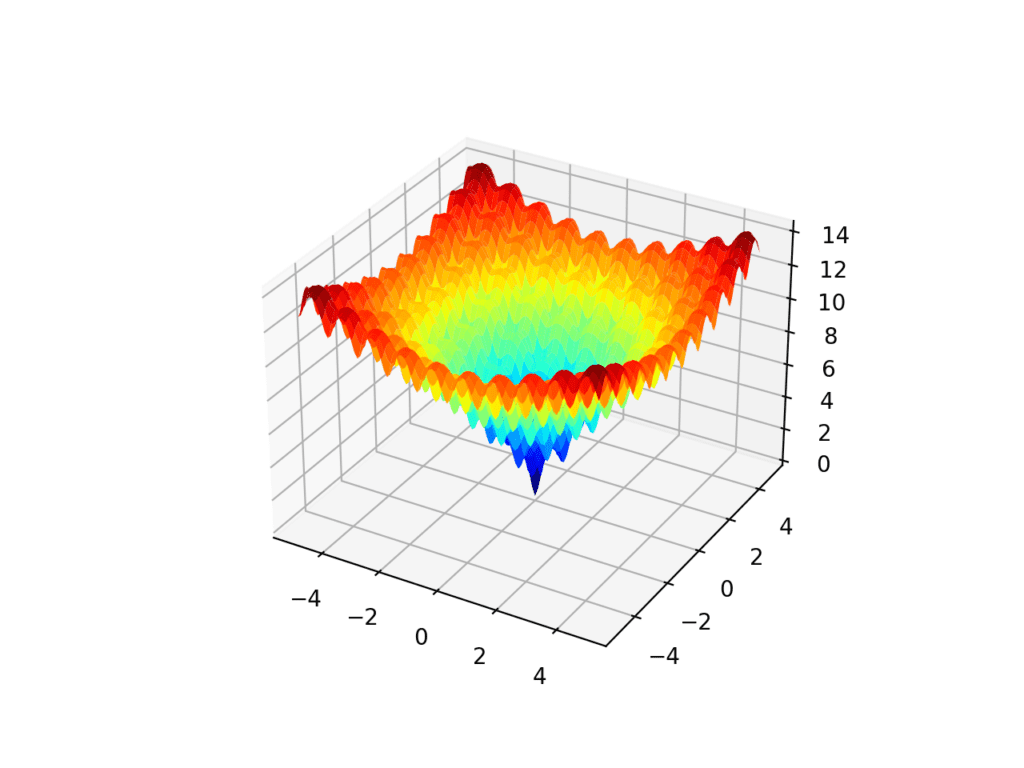 We would expect the Nelder-Mead function to get stuck in one of the local optima while in search of the global optima.

Initially, when the simplex is large, the algorithm may jump over many local optima, but as it contracts, it will get stuck.

We can explore this with the example below that demonstrates the Nelder-Mead algorithm on the Ackley function.

In this case, we can see that the search completed successfully but did not locate the global optima. It got stuck and found a local optima.

Each time we run the example, we will find a different local optima given the different random starting point for the search.

In this tutorial, you discovered the Nelder-Mead optimization algorithm.

Jason Brownlee, PhD is a machine learning specialist who teaches developers how to get results with modern machine learning methods via hands-on tutorials.
View all posts by Jason Brownlee →
How to Get Started With Recommender Systems
How to Develop a Neural Net for Predicting Car Insurance Payout

31 Responses to How to Use Nelder-Mead Optimization in Python